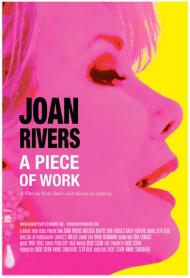 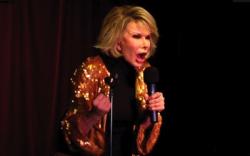 Joan Rivers is fearless (OK she does admit to being afraid of an empty date book). The first shot in this movie is a close-up of her 76 year old face sans makeup. After all the plastic surgery she's had that takes courage. She is also endlessly ambitious and a workaholic. At her age and with all the success and accolades she has received she still performs stand-up several times a month in and around New York City. We go to a dive comedy club in Queens where she points out the ripped seat cover on her stool and makes a self-deprecating joke about the state of her career.

Joan Rivers is fearless. Watch the way she handles a heckler when she makes a joke about a deaf child. He says, “That’s not funny when you have a deaf son.” To which she replies, “Oh yes it is! Humor is how we deal with things. You stupid man.” - Or something to that effect.

She lives extravagantly, splitting her time between a fabulously decorated New York apartment and a luxurious country estate. She worries about the people she employs and gives her time and money to the charity God’s Love We Deliver which brings home-cooked meals to homebound invalids. She worries that Kathy Griffin has taken her place in the entertainment industry.

This documentary is fast-paced, funny, insightful about its subject, and it produces its share of real emotion as well. I’ve been a fan of hers since the day I bought her “What Becomes a Semi-Legend Most” comedy album in the early 1980’s. “Oh, Grow Up!” She is indeed a piece of work and I admire her even more now. Yes, Joan Rivers is fearless. 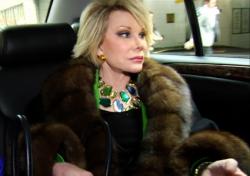 Joan Rivers, her fur is real, her face...not so much.

I recall laughing with Patrick while listening to “What Becomes a Semi-Legend Most”. She was rude, crude and insulting to celebrities. She made the kind of jokes about sex that I only heard from male comics. She has always been fearless and willing to cross any line in the hopes of creating a laugh. Other than an occasional blunt comment at some award show about how the famous are dressed for the event, I have barely given Joan Rivers much thought since.

Two things stuck with me about Joan Rivers: A Piece of Work. The first is that she will do whatever she can to make money. She readily admits that she lives very well but also tells us about her expenses such as her many staff members who include assistants, managers, makeup artists, lawyers…etc. She tells us she is paying for other people’s children’s tuition. She proudly states how she works hard to maintain her lifestyle and keeps the bills paid. At 75 she had more ducks in the pond than many celebrities one third her age. With her stand up shows, television work, a radio show, hawking jewelry and writing books and plays, Rivers is willing and wanting to explore all possibilities.

The other thing that runs throughout this film is that we are meant to pity Joan Rivers. We hear about her husband Edgar’s death and how she dealt with it. She goes on about how Johnny Carson stopped talking to her after she got her own show. She tells us about how her career had ups and downs. We see her rejoice in fans fawning over her but how much she is bothered by critics being less than kind over her play. As Patrick wrote, she moans endlessly about being old in a youth oriented society and how Kathy Griffin is getting all her work.

I found it interesting to see behind the scenes of a celebrity’s life. Joan Rivers has always seemed so brave on stage yet is quite insecure otherwise. Her daughter Mellissa states at one point that all comics are damaged, insecure and need the reassurance of an approving crowd. That is interesting enough, but I was not able to muster much sympathy for Joan Rivers. One scene shows her accepting work on a three day cruise for $150,000. Most people save up for such a vacation, while celebrities like her get paid to take one.

Joan Rivers: A Piece of Work is worth a few laughs as we see several takes from her standup routine as well as hear some one-liners she lets fly at random. However, watching this made me feel like I was paying a visit to a narcissistic senior citizen who can never truly be happy. She tells us how hard it is for her to fire one of her managers that she has known for a long time. We never hear how hard it is for him to be let go by someone he has known for so long. She cries when she talks about how difficult it is for her. Really? This guy is now unemployed while she is getting paid $50,000 a day to greet fans on a ship. What a piece of work!