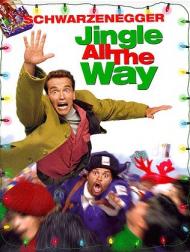 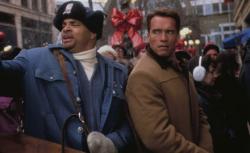 Sinbad and Arnold Schwarzenegger in Jingle All the Way.

My youngest son's favorite Christmas movie is Jingle All the Way. I have watched it more times on video than I can recall. He likes it for the superhero parts. I like it for Schwarzenegger's performance as a frustrated father at Christmas.

Arnold plays a work alcoholic father, Howard. To make up for his absences, he asks his son, Jamie, what he wants the most for Christmas. His son excitedly replies that he wants a Turbo Man action figure more than anything. However, on the night before Christmas Eve Howard realizes that he forgot to buy his son a Turbo Man.

On Christmas Eve, Howard ventures into the harried world of retail. His first stop is a toy tore with a huge line waiting for the door to be unlocked. Inside the glass door is a store manager swinging his keys around smiling at the cold shoppers. Hey, he may not have a lot of power in life, but what he does have, he relishes.

Once inside the store, Howard learns that Turbo Man is the hottest toy of the season and that they have been out of stock for days. The sales clerks and some other shoppers literally laugh in his face over his ignorance. After Howard intimidates the sales clerks, one of them tells him that a lady just got one out of layaway. Howard then races another father, a mailman named Myron, (Sinbad) out the door. Howard uses a remote control car to trip the mailman. Howard then looks down at the fallen postal carrier and says; "Poor baby." That became a catch phrase around my house. Whenever my son and I best each other in a wrestling match, one of us will undoubtedly use it on the other.

Anyway. Howard and Myron battle each other all over town trying to get a Turbo Man. Sinbad is great as the insecure mailman. In one scene Myron, who lugs his postal bag filled with mail the entire movie, runs down a street trying to catch up with Howard. To lighten his load he throws out some of the mail as he is running.

Another part has Howard trying to buy a Turbo Man from a shady Santa Claus (Jim Belushi). Howard ends up getting into a fight with a couple dozen Santas and their elves. One particularly large Santa looks menacingly down at Howard and says, "I m gonna deck your halls."

My favorite part of the movie is when Howard is at a mall toy store. The store manager, another one who is enjoying his temporary power, announces that they will have a lottery to decide who will get to buy from their limited supply of Turbo Man. The sales clerks, who were supposed to hand out colored balls, end up just throwing them in the air. Howard, Myron and dozens of other people leap into the air and go scrambling to get a ball. As this is going on, the soundtrack plays Johnny Mathis singing, "It's the most wonderful time of year..." How often in a movie does the soundtrack provide the punch line?

While Howard is going through shopping hell, his wife is at home fending off the advances of her single father neighbor, Ted (Phil Hartman). All of the single women in the area want Ted, but he only has eyes for Howard's wife.

Whereas Howard forgot the Turbo Man, Ted remembers everything. He already bought his son a Turbo Man. Much to Howard's dismay, Ted puts Christmas lights on Howard's house. Ted even brings a live reindeer home for the neighborhood kids to enjoy. To which Howard sarcastically says, "You think of everything." Later the reindeer and Howard do battle as Howard tries to steal the Turbo Man from underneath Ted's Christmas tree.

The end of the movie has Howard dressed like Turbo Man in a parade. It definitely goes over the top. With the costume on, Howard actually has super powers. It is not a long scene and it ends on a good note.

Jingle All the Way is a great Christmas movie. It demonstrates the absurdities of contemporary shopping. Christmas is a joyful time of the year, just as long as you don't have to shop or work in a store.

Jake Lloyd and Arnold Schwarzenegger in Jingle All the Way.

I don't know if I would call this a great Christmas movie but it is an enjoyably funny one. Jingle All the Way could have been called A Schwarzenegger Christmas. Like most of his action flicks it is brash, loud, and violent in a cartoonish manner. It pokes fun at the over-commercialization of the holiday season but this is satire by way of sledgehammer. There's nothing remotely subtle about any of it. And Arnie, as Howard Langston, proves once and for all that he is no actor. He has the comic timing of a wooden rhinoceros. Fortunately the supporting cast is terrific and the script is funny enough to overcome these problems.

Jake Lloyd plays the son who desperately wants a Turbo Man action figure for Christmas. He was a cute looking little cherub but he's not a very good actor either. This would become painfully clear a few years later when he infamously played the young Anakin Skywalker in Phantom Menace, before disappearing completely from the motion picture scene. However, one could argue that his lack of acting talent makes him the perfect choice to play Schwarzenegger's offspring.

Sinbad is hilarious as Myron, the postal worker who goes postal in order to get his son a Turbo Man. He and Howard both break many laws and show a complete disregard for the feelings of others on their mad dash to acquire the toy of the moment. Despite the lack of sympathy generated by these two clowns the movie manages to have a heartfelt conclusion, following the prerequisite big action sequence. These characters may be broadly drawn but it will still put a lump in your throat to see this father and son bond in such a joyful manner after all the silly shenanigans that came before.

Jingle All the Way is the type of movie that it's easy to find fault with. It is formulaic and most of the characters behave ridiculously. But somehow, as a family Christmas comedy, it works. Its heart is in the right place, and although the humor may be of the lowbrow slapstick variety, it is well handled by the talented supporting cast. Just channel your inner child, sit back, and watch the hilarious holiday antics unfold. 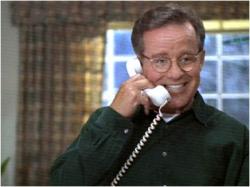 Phil Hartman in Jingle all the Way.

Arnie's acting ability is very limited and his comic timing is non-existent. As Patrick mentioned, Jake Lloyd was a horrible child actor. How he was able to get cast in such big name productions is beyond me. Together the two of them generate as much emotion as two planks of wood sharing a scene. Sinbad (whatever happened to him?) was no great actor either. Reportedly many of his lines were ad-libbed and given the level of his jokes, perhaps it's not surprising that he's disappeared from the public eye. Phil Hartman and Rita Wilson provide a couple of laughs. A reversal of roles between Hartman and Schwarzenegger with Hartman playing the desperate dad and Arnie the horndog neighbor could have improved this movie immensely.

The humor is almost entirely slapstick and not very funny slapstick. Watching Arnie run around chasing a bouncing ball in the Mall of America as he attempts to emote, or the over-the-top, ludicrous superhero battle ending is not my idea of funny. The jokes are on the level of an old Road Runner cartoon, only it runs an hour and a half instead of 5 minutes. Okay, there is the occasional laugh to be had. The photo of Santa's helper holding the Turboman doll as if it were a kidnap victim was funny and Hartman's smarmy attempts to seduce Rita Wilson likewise produces some laughs. For every good joke though, there's 20 jokes of Arnie falling down. Maybe that's the "hilarious holiday antics" Patrick was referring to? I'm really not sure.

This movie is easy to find fault with because it has plenty of faults. I tried channeling my inner child, but even he couldn't find much to laugh at it in this slapstick mess.