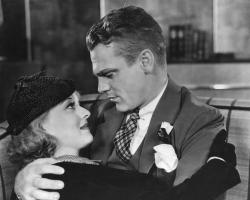 Bette Davis and James Cagney get close in Jimmy the Gent.

Jimmy the Gent was the first of just two movies James Cagney and Bette Davis made together during their long and illustrious careers. Like their later picture The Bride Came C.O.D. this one is a comedy. It was directed by the brilliant Michael Curtiz and runs at a breakneck pace for all its 67 minutes.

Cagney (sporting the most unusual haircut of his career) plays a racketeer that specializes in finding heirs to unclaimed fortunes. If he cannot locate a legal heir he has no qualms at all about creating a fake one. In one of the funniest scenes he coaches a heavily accented New Yorker in how to speak like a Southern gentleman, peppering his speech with “yassuh’s” and “sho-nuffs”.

Davis plays an ex-girlfriend and former employee that jumped ship to work for his well-mannered competition. She was fed up with Jimmy’s unscrupulous practices and doesn’t realize her new boss is just as crooked, but hiding behind a carefully crafted façade of respectability.

When a homeless woman dies and is discovered to have accumulated a 200,000 dollar fortune, the race is on to find her next of kin. Here the hectic plot gets even screwier as Cagney uncovers an heir who is accused of murder and living under an assumed name. Quickly devising several fake marriages (you have to see it to understand just how it works) he denies the prosecution their star witness, thus gaining access to 50% of the money. In the process he proves to Davis that her new boss is just as shifty as he is and wins her back with a half-hearted promise to reform.

Cagney and Davis prove a formidable comic pair. He blusters and charms his way through, mouth going 90 mph throughout. Davis (also sporting a rather unusual coiffure) easily keeps pace with her own unique brand of charisma. It’s a shame these two highly original stars didn’t make more movies together as they create sparks while smacking lines back and forth like two tennis pros. Her best moment comes when she plants her feet, places her hands on her hips and tells Cagney, with that exaggerated enunciation of hers, “You can go down deeper, stay under longer and come up dirtier than any man I know!”

This pre-code effort includes a few racy lines. In getting the women to agree to marry his client Cagney asks each of them what they would do for 100 grand. One says, “What wouldn’t I do?” and the dumb blonde, played hilariously by Alice White, enthusiastically replies, “I’d do my best.”

Jimmy the Gent is a tiny little comic gem featuring two of the silver screens all time greats. 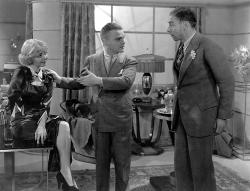 The 1930s was the Golden Age of screwball comedies. Jimmy the Gent, while probably best remembered (when it's remembered at all) for the pairing of Cagney and Davis, is a short, but excellent and often quite funny example of the genre. And I totally agree with you Patrick about the haircuts. What was up with them?

While in their later collaboration they would be on more equal footing, here Cagney is clearly the star and Davis isn't given all that much to do. Unlike you Patrick, I don't really think that they shared that great a chemistry together. I think the sad fact is that this part was beneath Davis's talents. All that was really required is to have someone cute and innocent enough in the part. I had a hard time believing Davis was as naive as her character was supposed to be. While she does get in a few digs in that distinctive style of hers, really almost any actress of the time could have played this part.

Cagney on the other hand, plays his part like no one else could. His pugnacious little tough guy with a heart of gold persona is on full display. He's constantly two steps ahead of everyone else. How many actors have moved as easily between tough guy and comedy parts as he did? And he played both of them well.

The supporting cast is also quite good, with Alice White stealing every scene she appears in. When Cagney gives her $250 and tells her, "Take this on account.", she replies, "On account of what?" And the way she flips from man to man at the end of the movie is worth a good laugh. Many of her lines and other jokes would definitely not have been allowed after the Code was enforced.

Fast paced and laugh-out-loud funny at times, Jimmy the Gent is an obscure little film that deserves to be remembered more than that is. 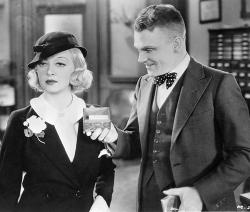 With his military type haircut, Cagney plays an insecure, unscrupulous business man from the wrong side of the tracks.  He pines for Davis and thinks if he can be more of a gentleman, he can win her back.  She does not realize that her boss is as phony as they come.

When Cagney goes to his competitions office, where Davis now works, he keeps getting a tea cup shoved in his face.  When he gets to see the boss, he asks, "How long would it take a mug like me to talk your kind of lingo?"

As my brothers have pointed out, Jimmy the Gent is full of great lines.  When Cagney tells Davis he has been thinking about her, she responds, "I'm liable to catch something hanging out in your mind."  I also enjoyed Alice White's dumb blonde routine.  Marilyn Monroe may be the most famous dumb blonde but Alice White proves she was hardly the first.

The movie ends on a hilarious note with Davis and Cagney together, with her still having to remind him to to send the money to the rightful heir.  These are some great characters.  Cagney was known as a tough guy but he was also very competent in a comedy. 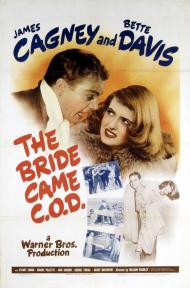