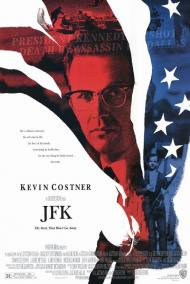 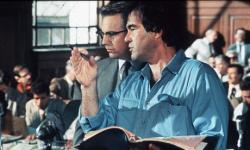 Oliver Stone's JFK remains one of the most controversial movies ever to come out of Hollywood. I mean how many movies can boast truthfully that it led directly to an act of Congress? In 1992 the President John F. Kennedy Assassination Records Collection Act was passed, and signed into law by President George H.W. Bush. Known as the AARB, this group functioned until 1998, interviewing witnesses and reviewing old medical records. The Zapruder film was purchased by the US government and some formerly-classified documents pertaining to the assassination were released, with a law stipulating that all remaining assassination-related documents will be made public by 2017.

I'm not going to get into how factual or not this movie is. Just a quick search online reveals there are many people in both camps. There is a plethora of reading material on the subject. Some that support Stone's theories and others that refute them. However, if Oliver Stone's objective was to get the country talking and thinking about JFK's assassination then he most definitely succeeded. This November marks the 50th anniversary of that fateful, tragic day in Dallas, so it seemed like the right time to revisit this movie.

The cast, led by Kevin Costner, is quite good and filled with recognizable faces. I find it ironic that just a few years before playing Jim Garrison, Costner gave a speech in Bull Durham where he says (among other things), “... I believe Lee Harvey Oswald acted alone...” The antithesis of what Jim Garrison believed. At any rate Costner does a credible job playing a man obsessed with this case at the expense of his home life.

The script for JFK was written by Oliver Stone and Zachary Sklar and was based on two books, Jim Garrison's On the Trail of the Assassins, and Crossfire: The Plot That Killed Kennedy by Jim Marrs. Remarkably for such a technically complex movie, Stone shot the entire thing in just 72 days. It contains his trademark frenetic (and in this case Oscar winning) editing style and remains quite modern more than 20 years later. JFK also won the Oscar for cinematography.

Stone writes memorable dialogue... Joe Pesci as David Ferrie: “Oh man, why don't you fuckin' stop it? Shit, this is too fuckin' big for you, you know that? Who did the president, who killed Kennedy, fuck man! It's a mystery! It's a mystery wrapped in a riddle inside an enigma! The fuckin' shooters don't even know! Don't you get it?” or Costner as Jim Garrison: “Now we're through the looking glass here people. White is black and black is white.” And my favorite lines by Sissy Spacek after she learns of Robert Kennedy's assassination. Liz Garrison: “Oh my God. Both of them? Both brothers?”

Stone's storytelling technique is fairly straightforward. He has his characters discuss events leading up to the assassination, then using reenactments shows us what they are discussing as it allegedly occurred. It is very effective propaganda as he smoothly spoon-feeds his theory to the audience, all of which culminates with the inclusion of the film's most controversial figure. The man played by Donald Sutherland and known only as X. He's a fictional composite, based on Richard Case Nagell and retired Air Force colonel Fletcher Prouty, who links JFK's assassination to the highest levels of our government.

In all likelihood the American people will never know exactly what happened on November 22, 1963 in Dallas, Texas. Historically accurate or not, Oliver Stone's JFK remains one hell of an interesting and well-made theory concerning the calamitous events of that fateful day. 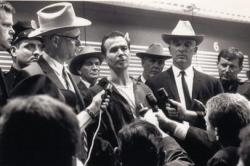 The assassination of John F Kennedy truly marked the end of America's innocence. It caused some of the population for the first time to highly question what was being reported and to think twice about what our government wanted us to believe. This movie has one goal. To prove that Oswald did not act on his own. It also accuses the CIA of planning and executing the entire thing with Oswald simply made to be a patsy. The motivation being that Kennedy wanted to end the war in Vietnam and the people making money off the war did not. Sound implausible? Those very accusation were made by the liberal media of George W. Bush going into Iraq but not ,of course, Obama escalating things in Afghanistan.

This film implies that Kennedy's assassination was covered up from the start. Important key players kept coming up dead, including Jack Ruby, David Kerrie and of course Oswald himself. Clearly someone in power did not want these people, and others, to talk. It was intended for Oswald to take full and sole blame for the assassination. This brought to mind the recent attack on our embassy in Benghazi. Before any details were fully reported, everyone in the Obama administration, including Obama himself, raced to the nearest microphone to tell the American people that U.S. Ambassador Chris Stevens was killed because of a YouTube video that had outraged a Muslim mob. Within weeks it was firmly established that the video motivation was an entirely fabricated lie. The lie though, is not the story. Why there was a coordinated lie, is. Whether Oswald acted alone or how he participated in killing Kennedy is not the real story, why Kennedy was killed is.

Like the YouTube video that the Obama administration wanted the masses to accept for the cause of the Benghazi murders, the powers that be in 1963 wanted all eyes on Oswald. The problem being that people, like Jim Garrison and for that matter Oliver Stone, kept asking questions. With every question asked, more questions arose. Another comparison to Obama's current problems are that at one point in this film, the IRS decides to look into Garrison's finances. It is fairly common knowledge that Kennedy used the IRS against those who did not step in line long before Obama did.

After watching this film, I spent the rest of the afternoon researching the Kennedy assassination. As Patrick wrote, there are people in both camps still blogging about it today. Many still believe Oswald acted alone and think Stone fabricated much of this film. Although he took some dramatic license, most of what is depicted here can be corroborated. The Kennedy assassination cover up was quite shocking to a nation as was Watergate. Today we have have become numb to such scandals. The recent IRS scandal is vastly worse than what Nixon was impeached for. The Benghazi embassy attack is full of unanswered questioned to an obvious cover up. I hope some film maker, some day will eventually gets the balls to do a film about Benghazi and all the unanswered questions therein like Stone did here.

The end of JFK warns of a nation becoming complacent to a government's secrets. Have we? We need people to question when and why we go to war as well as how long they last. We need people to keep asking questions when one of our Ambassadors is murdered and our nearby military is told to stand down instead of helping. We need to persecute the IRS for its bias actions and those who directed it. Costner says near the end of the film that, "...someday, somewhere, somebody will find out the damn truth." We can only hope.