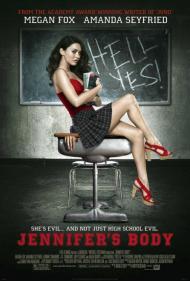 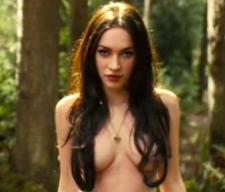 When her mouth is shut and her clothes are scarce, Megan Fox shows real talent. The rest of the time, not so much.

Although common for an actor or a director, it's pretty rare for a writer to be the flavor of the month, but that's exactly what Diablo Cody became following the success of Juno. Her distinctive voice filled that popular movie and made it one of the most quoted and and parodied films of 2007 while propelling it to critical and box office success. Jennifer's Body, Cody's sophomore effort, while still containing her trademark wit and distinctive dialogue, lacks Juno's spark and perhaps more importantly, its charming cast.

Amanda Seyfried (Mamma Mia) and Megan Fox (Transformers) play two high school girl BFFs. Fox plays Jennifer, the slutty popular girl, while Seyfried is the ugly pretty nerdy girl nicknamed Needy. Following a fire at a local bar, Jennifer is taken by an Indy rock band out into the woods and sacrificed to the devil. The band is hopeful this will ensure their success. What they don't know is that Jennifer is about as far from a virgin as it's possible to get. This causes the sacrifice to go wrong and instead of dying Jennifer is transformed into a succubus; devouring teenage boys to feed her demonic appetite.

What follows is a mildly entertaining Horror/Comedy that isn't scary or funny enough. It's like a bad episode of Buffy the Vampire Slayer, only without the wit or the intelligence. A hot teenage succubus could certainly have been used as something symbolic about a certain type of high-school girl, but nothing here is beneath the surface. It just is what it is.

Megan Fox is one of those actresses who gets by purely on her looks. She's an average actress at best and she seems pretty vacant. Her charms are purely physical and while she's prettier and more glamorous than Juno's Ellen Page, she lacks Page's innate charm. Her best moments in this movie are the same as they are in every other movie I've seen her in; with her mouth shut and in as little clothes as possible. I have trouble envisioning her with a lengthy career.

Seyfried, on the other hand, does the best she can with what she's given. She has an innocence that is believable and likable. You have to wonder what she could have done if her character had been turned into the succubus instead. Transforming the good girl into the man eater while the bad girl suddenly has to be the heroine of the story certainly sounds like a more intriguing idea than the one they actually went with.

It's not that Jennifer's Body is horrible. It has some funny moments, some mild titillation that should have been amped up and a running time that's short enough to keep you from getting bored. It's just that I kept waiting for it to step up to that next level, but it never does.

I have a feeling that Diablo Cody is talented enough so that she'll eventually have another hit on her hands. I doubt however, that it will be the sequel that this one has left itself open for.

OMG! Jennifer and Needy are like so lesbi-gay for each other.

Having created Juno, I expected Diablo Cody to write more original characters than these. From Heathers to Bring it On, Hollywood has been reminding us just what bitches teenage girls can be. Mean Girls did it best, and no one has come close to it since. Turning a rude highschool slut into a succubus is hardly even imaginative. The ugly/pretty girl, has likewise worn out her welcome. All of the highschool boys are stereotypes. There is the jock, the Goth. and the boy next door. The only trait any of them have is that they can all be lead around by their libido.

My favorite scene is when the boy next door, Chip (seriously, that's his name) is having sex for the first time with Needy. She is losing her virginity, but lays there looking bored, like she is wondering if there is a new episode of The Hills on. While Chip is on top trying to work the magic, she starts to have bloody visions of Jennifer and the dead jock, that cause her to gasp and screams. Chip looks down and asks, "Am I hurting you? Am I too big?" It is the most unintentional funny scene of the year.

The only character I was mildly interested in was that of lead singer Nikolai. He is the real villain in the movie. Jennifer has no control over her actions. He wants to be cool, just like Adam Levine from Maroon 5. Referring to the small town they are performing in, he says, "I think it's important to reach out to our fans in the shitty areas, too."

Cody peppers this movie with cute little phrases and dialogue. Sometimes they work, such as when Jennifer comments on Needy's finger nails, "You need a mani bad. You should find a Chinese chick to buff your situation." and sometimes they do not, as when Needy's Mom tells her, "I didn't let 'em get to you, 'cause I'm a hard-assed, Ford-tough mama bear." Cody relies far too much on pop culture references, "I can take care of myself. I've been using the Bowflex." Chip assures his mother.

Not only is Cody not on her game, but Karyn Kusama was not a good choice as director. She is the one that nearly destroyed Charlize Theron's career in 2005, with AEon Flux. The one thing I wanted to see happen in this movie was for Nikolai to get his comeuppance. That was the only death that was worth rooting for. Kusama never shows it happening. We just get some bloody stills during the credits. Whoever is foolish enough to hire Kusama next, deserves her.