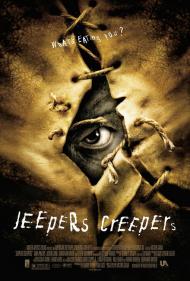 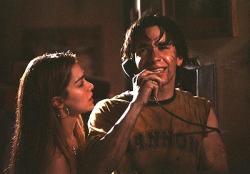 What begins as a creepy story ends on a disappointing note. Jeepers Creepers is a scary, but unsatisfying roller coaster ride of horror. Still, it is worth a few moments of fear.

A bickering brother and sister, Darry and Trish, are driving home from college. On a country road, a man in a hat and trench coat passes them, nearly driving them off the road. A bit later, they pass the man on the side of the road apparently dumping a body down a hole. Of course they end up going back to the hole to investigate what it was. Darry going down the hole and what he finds is easily the creepiest moment in the movie.

The trench coat man is actually a demon known as The Creeper. He eats people for a particular body part that he desires. The usual chase scenes and scares occur. What makes this monster different from the usual slasher movie monsters is that The Creeper flies.

What also makes this movie different is that there is no sex. The first Halloween movie started a horror movie tradition that A Nightmare On Elm Street and Friday the 13th followed. Teenagers have sex and then die a horrible death. What kind of metaphor is that? Why the maker's of this movie decided to go with siblings and not lovers is pointless. A little on screen nookie may have added a little spice to this mediocre film.

The ending is surprising, but not good. I will not spoil it for you, but it does not match the eerie set up from the early part of the movie. Still, this is an okay Halloween movie that may have you do a double take the next time you see a scarecrow at night.

Jonathan Breck as The Creeper poses as a scarecrow in Jeepers Creepers.

Eric, writer/director Victor Salva says he intentionally made the main characters siblings in order to, “...eliminate any sexual tension and keep them focused on escaping the Creeper”. It could also be seen as an homage to the zombie classic Night of the Living Dead. Like that movie, Jeepers Creepers opens with a brother and sister driving along a lonely rural stretch of road before being attacked by a stranger. The lack of sex didn't bother me. It would only have slowed things down.

I agree the set-up is quite effective. Of course these teens, like teens in all horror movies, behave in a completely unbelievable manner. There is no way they would have gone back to investigate that pipe after being chased and nearly run off the road. As a post-Scream horror flick Jeepers Creepers is somewhat self-aware. When Darry decides to actually crawl inside the pipe, Trish quips, “You know the part in scary movies when somebody does something really stupid, and everybody hates them for it? This is it.”

The title of the movie comes from the 1938 Harry Warren/Johnny Mercer standard, that was originally written for the movie Going Places, and performed in that picture by Louis Armstrong. In this movie the song serves as theme music for the Creeper. Whenever it is heard it heralds his arrival on the scene. The lyrics to the song bring a macabre meaning to the final scene.

Some movies get better as they go along, while others run out of steam. Jeepers Creepers suffers from the latter fate. As Eric wrote, it has a creepy premise, and several scary moments. Up close the Creeper looks a bit on the cheesy side but from a distance he is quite frightening. His wings give him an added demonic appearance. The scene where he poses as a scarecrow is visually terrifying (see photo). Although technically set in springtime it definitely works as a Halloween movie. There is even an old woman with thousands of cats. If only they could have come up with a more satisfying climax, this could have been a minor horror classic. 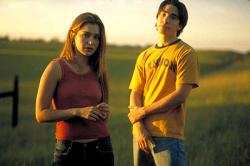 I agree with my brothers. Jeepers Creepers starts intriguingly and features a rather iconic villain, but it suffers from a poorly written script that relies on too many contrived situations for its frights. However, even with its weaknesses, it does manage to entertain on a very shallow B-movie level. At just 90 minutes, the pace remains brisk and there are some genuinely creepy moments.

The first 20 minutes of the film are its strongest. The bickering siblings on a lonely highway, menaced by a souped-up antique truck, who catch a glimpse of a mysterious man dumping something wrapped in a bloody sheet down a well, is a very intriguing start. As Eric pointed out, what follows is a creepy and frightening discovery that is almost strong enough to cover up for the fact that Patrick pointed out, which is that no way in hell would these two seemingly sensible siblings be stupid enough to venture back to that farm and down that hole.

This stupidity on the part of the characters is the film's weakest aspect. Whatever the situation, these two geniuses tend to take the exact wrong action. They investigate what they shouldn't, they stop their car when they should be driving away as fast as they can and they stop and stare long enough for the Creeper to catch up with them. There were several moments while watching where I was literally screaming at the screen for them to keep moving. By the end of the film, I was virtually ready for the Creeper to kill them both as retribution for their stupidity.

I agree with Patrick that the characters being siblings rather than lovers is a good thing. A sex scene would have slowed down the pace and making them brother and sister is one of the film's only semi-original points. Plus, stars Gina Philips and Justin Long have a good sister and brother chemistry. They bicker with each other in a believable manner and very quickly establish their characters in the opening scene.

The Creeper is an intriguing and frightening villain. His impersonation of a scarecrow following the scene with the creepy old lady with all the cats, is one of the film's most atmospheric moments. Wisely, or perhaps because of budget constraints, we never get a really clear look at him until the end, which adds to his creepiness. With a better script he might have ranked up there with Michael Myers, Jason or Freddie Krueger. 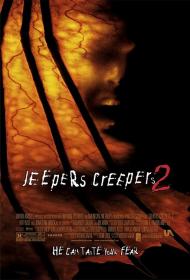