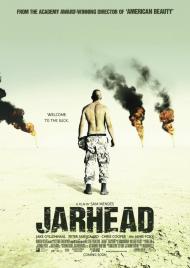 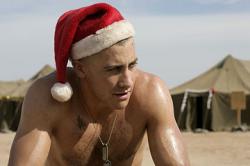 Along the way he meets the usual assortment of military characters that appear in these sorts of films; the crazy guy, the innocent guy, and the career drill instructor who's tough as hell on them, but has a heart of gold underneath. The latter is played by Jamie Foxx who continues to prove himself as an actor, but isn't given nearly enough to do here.

The majority of the movie is spent in the desert during the Shield portion of the war and shows how the Marines cope and sometimes don't cope with the wind, the sand and the mind numbing boredom of constantly waiting. Perhaps director Sam Mendes wanted the audience to get the feeling of what it was like for the soldiers because like them we are force to wait for far too long as this portion stretches on and on until we're experiencing the same boredom that the characters are.

The movie and war differ from older movies and wars when Desert Storm begins. Since, if you're old enough to remember, that war seemed to be almost entirely determined in the air, the marines are left with nothing to do but walk across the desert amongst the dunes and the burning oil wells. The only enemy that is seen is through the scope of a sniper rifle and even then they are deprived of the kill by an air strike. The only death that is shown is the remains of bodies on the ground that were killed from above.

With Hollywood's habit of Bush-bashing I fully expected this movie to make a political statement. However, it is almost completely devoid of politics. When two marines begin arguing over the political reasons behind the war, another marine (Sarsgaard) cuts them off by telling them, "Shut up. We're here. That's all that matters. All the rest is just bullshit." And given their predicament, it is easy to see his point. When you're there on the ground with no control over your own destiny, the politics behind the war must mean much less then just staying alive.

This lack of a stance though ends up handicapping the movie. Without a clear position, other than the fact that war is hell for soldiers on the ground, the movie conveys no other message, but then maybe that's all it's trying to say. 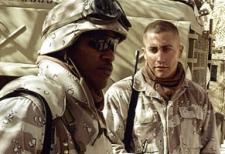 Marines all geared up with no one to kill.

Jarhead is not about war being hell for soldiers on the ground. It barely ever shows the war. The only message I saw in this movie was that it really sucks to be a marine. From start to finish, the marines threaten and intimidate each other. They are asked to sign a waiver in case the pill intended to help him does not. They have to wear a plastic hood over their head in 112 degree temperatures to show off for a reporter. They are told what to say to the reporter. Anthony gets latrine duty, in which he has to collect barrels of shit and burn them. The movie goes on and on about how bored all of the men are.

Jarhead strips away any of the glory one may expect from joining the service and replaces it with boredom and bullshit. Not only does this movie portray being a marine as an endless chore, but it also shows that it will destroy your personal life. The men have a wall of whores, where they put the pictures of all of their unfaithful girlfriends. Anthony Swofford’s girlfriend follows suit. One guy finds out about his wife’s adultery by her sending him a video of her doing the neighbor.

Most war movies have the theme that war is hell. Written by the real Anthony Swofford, based on his time in the marines serving in Desert Storm, Jarhead has a theme that being a marine is hell. The one thing the guys are looking forward to, besides going home, is the chance to actually shoot their guns at an enemy. It is what they trained for. It is what they are paid for. The only thing anyone ever shoots is a camel. It would be like getting called up to the majors, but only getting to practice, and never getting a chance up at bat in a real game.

Jarhead may be a realistic look at what it was like for Anthony Swofford to be a marine, but it does not make for an entertaining movie. What did the producer think when he read the script? A bunch of marines go to Kuwait where they sit around bored and then do not see any action once the war starts? Jarhead may not be about politics, but it has an agenda. The only reason to make this movie is to be anti-military. The only thing it accomplishes is that it takes a very negative look at our military servicemen and the lives they lead. Never does it suggest that anything good may come out of being in the marines. You know, like writing about your time in, and getting your book turned into a major motion picture.