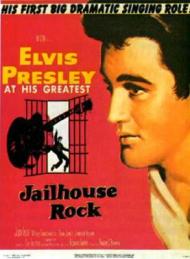 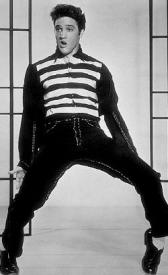 Elvis Presley, a rebel for applause.

After the death of James Dean, in 1955, Hollywood went looking for 'The new James Dean.' Plenty of teen dramas were made with good looking young men trying to act tough and rebellious. Elvis Presley was a singing rebel. He danced and gyrated like no white man before him. With good looks and some decent acting talent. Elvis made his bid to fill Dean's shoes. His third film, Jailhouse Rock, might as well have been called Jailhouse Rebel with a Song.

In Jailhouse Rock, Elvis plays a punk jail bird named Vince. His cell mate is an old country singer, Hunk, who teaches Vince how to play guitar. Vince already has a knack for singing. The two sign a contract with each other that says all profits from either of their future singing careers will be split 50/50. Vince gets out of prison and starts a singing career with the help of a girl he meets named Peggy. She helps him get a demo cut and shops the song around town. After some set backs and some sexual tension Vince and Peggy form their own recording company. Vince soon becomes a singing sensation.

Hunk eventually shows up and expects the contract that he and Vince signed in jail to still be valid. Vince laughs the contract off and hires Hunk on as a flunky. Vince then goes to hollywood to make a movie. Before long he is dating his starlet costar and acting like a prima donna. Hunk eventually gets tired of Vince's attitude and kick's his ass. The fight ends when Hunk hits Vince in the throat and crushes his larynx. Everyone worries that Vince may never sing again. The weak final scene is Vince singing next to a piano as Hunk and Peggy look on. But not to worry, the world can continue to rotate. Elvis can still sing!

This movie is filled with 50's lingo like 'Daddio.' In one scene, Vince just finishes singing when a girl approaches him and says that his singing is 'real gonesville.' Shortly afterwards, his girlfriend asks him what he thinks of her new outfit. Vince replies that it is 'flippy.'

Elvis eventually became an overweight Las Vegas joke, but in 1957 he was the coolest, hippest daddio on the planet. In this movie he sneers, slaps people around and attracts every girl in sight. Every guy around him looks square. When he is in the recording studio, his band looks like a bunch of middle aged musician who haven't got a clue. When dancing to the title track he is surrounded by a bunch of left foots who can't keep up.

Elvis never created the same onscreen charm as James Dean but he never had to. He was a one of a kind superstar who deserved to be remembered for what he was. Before Justin Timberlake, George Michael and David Cassidy there was Elvis Presley. Watch Jailhouse Rock and discover that teen idols have really not changed much and that if Elvis was alive and 22 years old today he would be outselling them all.

Elivs Presley, a rebel without a sub-clause (in his recording contract, that is).

Elvis, in 1957, had more raw charisma and natural stage presence than just about anyone else who ever lived. He also possessed the perfect mix of innocence and rebelliousness. This movie captured these qualities at there very peak. Still with the exception of the classic title number in the cell block where he finally lets loose with his rock-n-roll voice, this is an entirely forgettable movie. Like virtually all Elvis movies this one is beneath his talent and full of silly, predictable plot devices. From the scene at the beginning when Vince kills a guy in a bar fight and then serves time in prison on manslaughter charges to the final happy Hollywood ending when he realizes he can still sing there is not one surprising moment in Jailhouse Rock. It does, however, as Eric mentioned, capture perfectly the music and speech patterns that appealed to teenagers in the late 1950's. Girls swooned for Elvis and guys envied him. The second most famous song from this movie is 'Treat Me Nice'.

But either you're a Presley fan or you aren't and no review in the world is gonna change anyone's mind about that.

I am curious though about the lyrics to that title song. When he sings, '#47 said to #3, you're the cutest jailbird I ever did see. I sure would be delighted with your company, com'on and do the jailhouse rock with me'. Just who is he singing to? There isn't a female in sight. I can only assume that both jailbirds are guys. And if so how did such a blatantly homosexual line ever get put in an Elvis Presley movie in 1957? 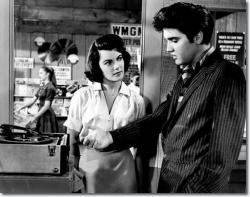 Elvis Presley, a rebel with some flaws.

Jailhouse Rock isn't that great a movie, but it is interesting and occasionally entertaining. It's certainly worth seeing for the title number alone, which is one of the seminal moments in 20th Century pop culture history. It captures a moment in time when Elvis was red hot and cutting edge. He would remain popular for the rest of his life (and well past), but this pre-army Elvis strutting his way across the silver screen was at the peak of his cool.

What makes this movie fairly unique is that Elvis is playing a bit of a bastard here. He's selfish and arrogant and doesn't really care whose feeling he hurts and he never really changes. The ending of the movie sees him seemingly reunited with his "friend" Hunk and his girlfriend Peggy, but he never apologizes to either of them and gives no real indication that he's changed. It'd be rare for such a character to be in a movie today, but in 1957 it's almost shocking. I kept waiting for the heartwarming ending where he redeems himself, but it's surprisingly absent. He's a prick and he benefits by being one.

The lyrics of the title song have been analyzed before and mentioned as homoerotic. Any search of the internet will show you the debate continues, but to my mind, they're simply words from a more innocent time and have no subtext or any real logical meaning to them.

Like you Eric, I laughed at the slang being thrown around. Elvis was so cutting edge, with the way he talked, moved, did his hair and dressed, there's no way he could stay cool for long. He was so very much of that moment in time.

Although Elvis was never a great actor, you can see that this point in his career he was still trying to be taken seriously. His later movies would find him playing the same likable guy in different settings, but here he's playing it straight and serious. For this movie, he actually seems like an actor rather than just a star.