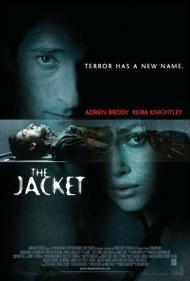 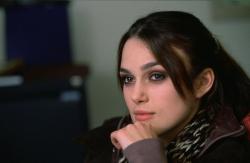 Keira Knightley in The Jacket.

The Jacket is an interesting movie that fails to deliver on its promise. It has an ambiguous ending and feels as if several key scenes were trimmed or cut completely for time. The finished product has the feel of a poorly executed X-Files' episode played with big-name movie stars.

Adrien Brody stars as Jack Stark, a Gulf War Vet who only just survived a gunshot wound to the head. Invalided home, he meets a young girl and her mother on the side of the road one day and stops long enough to help them get their truck started. Later that same day a driver, who, it turns out, is wanted by the law picks him up as he hitchhikes. After a police officer is murdered and Brody is wounded in the head again, he ends up in an insane asylum found guilty of the murder of the cop.

One of the doctors (Kris Kristofferson) in charge of the hospital where Jack is committed has developed a new and controversial treatment for the criminally insane. First, he puts them in a straitjacket (hence, the title), then pumps them full of drugs and then he sticks them in a morgue drawer for a few hours. When he tries this treatment on Jack, Jack is resistant at first, but then he discovers that while he's in the drawer he's able to travel forward in time to the year 2007. In that year, the little girl that he helped by the side of the road has grown up to be Kiera Knightly. And she tells Jack that he died in 1993, only a few days in the future from Jack's perspective, but many year's ago from hers. Determined to change his fate, Jack begins flitting back and forth between the different times, trying to figure out what's going to kill him and how he can stop it.

A plot device like time travel is difficult to rationalize and this movie never even tries. Jack is able to travel through time somehow and you just have to accept it. The characters in the movie seem able to accept it so easily that apparently the director and screenwriter's assume the audience will as well. Kiera's character in particular is overly gullible, not to mention poorly written. It's necessary to move the storyline along, but she behaves in the stupidest manner possible. She meets a strange man on the side of the road, so naturally she invites him home and then naturally she decides to take a bath (Yes, she does a nude scene.) when they get there and then she protests for about five minutes when he tells her that he's from the past, but then believes him without question and then, logically, she has sex with him, because apparently that's what you do when someone's traveled through time.

If there's one thing I hate in a movie, it's an ambiguous ending. I don't mean a cliffhanger, but an ending that's unclear or leaves the story open to your interpretation. That's exactly what this movie does. This makes it easier to write about, since I can honestly tell you that I have no idea whether Jack lives or dies, but it makes for a frustrating moviegoing experience. I just spent nearly two hours watching this nonsense; at the very least you can tell me what the resolution is.

I'm sure that this movie will develop a cult following. It has just enough weirdness in it to inspire the right sort of people, but for me, I'd just like to see an extended edition on DVD that fills in the many gaps left out of this version. 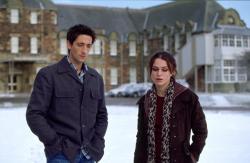 Adrien Brody and Kiera Knightley in The Jacket.

My impression of The Jacket is exactly identical to my brothers. Like him I hate ambiguous endings, to me they always feel like laziness on the part of the writer/director. If they can't be bothered to figure out how the story ends why should we?

This movie has interesting characters played by a good cast with a fairly intriguing and original premise. But just what the hell happens at the end? Does Jack end up in 2007 living with the now grown up Jackie or do they both die and go to heaven? And why is it that Kris Kristofferson and Jennifer Jason Leigh never get cast in any good movies?

If you don't mind your movies a bit muddled and unclear plot-wise then you will probably enjoy The Jacket. It probably also means you enjoy David Lynch movies. Call me un-hip but I like a storyline that I can follow or at the very least one where I don't have to guess if the main character lives or dies at the end. 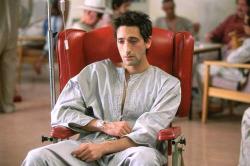 Is Adrien Brody pondering what happened to his career? I may have an idea.

I agree with my brothers that The Jacket is a pointlessly confusing film. Time travel via a morgue drawer, a strait jacket and lots of drugs leads us to think it may all be in Jack’s head. Later we learn that he is actually time travelling so all of the misleading was for not.  The editing is poor. Whenever he time travels we are offered a headache in the form of flashing lights, loud music and brief snippets of other scenes. This is a fantasy film in which the gimmick of time travel is the most entertaining aspect. There is no need to make such a dramatically vague issue out of it.

John Maybury is a horrible director. He focused too much on the scenes of Brody being locked in the morgue drawer. All we ever needed to see was the door close behind him. Where Maybury should have spent more time was on the emotional reactions of the characters in question. As Scott wrote, Jackie quite easily accepts the fact that Jack is a time traveling stranger she once met as a child. They quickly fall for each other even though the only thing she knows of him is his time travel story?

We never feel anything for either of these two. Jackie is a fairly pathetic creature. She picks up a strange bum and takes him home? Jack is a victim over and over again. It should have been very easy for us to sympathize with him but, again, Maybury has no clue how to bring him, or any of these characters, to life. The scene where we are to believe that Jackie’s mother changes her way of life just because she reads a letter from someone she does not know is about as realistic as time travel.

There are so many possibilities for films that involve the ability to move a character through time. The fact that he knows things that others do not is touched upon but never fully explored or put to humorous use, and this film could definitely use some lighter moments. What about his family? Did he not have anyone he wanted to contact? Why does Jackie’s life supersede his?

As far as the ambiguous ending goes, I have no idea what my brothers are talking about. Although Maybury could have spent a bit more time on it, I think the ending is obvious.  SPOILER ALERT: For whatever reason, after Jack dies, he travels in time to the point where he first traveled in time and met Jackie. Only now she is better off because her mom read the letter and Jackie had a better life. After Jack endured three severe head wounds, false imprisonment and Daniel Craig’s horrible accent, the script owed him a happy ending. If only The Jacket could have found a way to reward the paying audience as well.