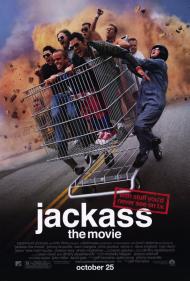 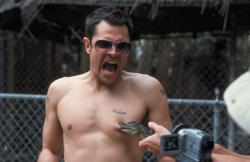 Johnny Knoxville in Jackass: The Movie.

My family lived on the top of a hill. I remember sledding down the middle of it in winter. Our street intersected with a busy road at the bottom. I was in my early teens. We didn't let the sled go all the way into the busy street though. I mean, we were not completely stupid. We would purposefully run the sled into a telephone pole or something to stop the sled. We some times had up to 4 kids on the sled at a time. So when we hit the pole the ones on the back of the sled would go flying over the heads of the ones in the front. It was fun! We could of gotten hurt. Hell, we could have been killed, but we were young and the danger was part of the fun.

This mentality is exactly what the entire movie of Jackass is about. Only here it is a bunch of twenty-somethings. This group, lead by the masochistic Johnny Knoxville, is pretty much just a bunch of guys getting off on doing stupid, juvenile stuff. Their stunts range from shoving a toy car up their ass to taking a shit in a hardware store display model toilet.

Johnny Knoxville is into pain. He lets himself get shot by a riot gun that shoots small bean bags. It leaves a nice bruise he proudly displays. He lets some of the other guys paper cut him between each finger and toe. My favorite one of his self inflicting pain routines is where he lets the baby alligator bite his nipple.

A couple of the other guys are into wearing nothing but thongs. One will walk up to an unsuspecting man on the street, pull off his own clothes leaving nothing but his thong on and then gyrate against the guy. One of the more interesting stunts had one of the thong guys laying on his back on a balcony wearing only his thong. He then shoots bottle rockets out of his anus with a string attached to it and the other thong guys dick.

There are routines involving destroying a rental car and jumping in golf carts. Those jokes just seem like old Candid Camera routines. Some of their best routines come from them just sitting around a hotel room under the influence of beer. In one such situation they use muscle relaxer electrodes on different parts of their bodies. Yes, one Jackass puts them on his balls.

One running gag has the guys made up to be old men. They have people run to help them as they pretend to be helpless old people. The jokes could have been funny, but this group thrives only on shock and not finesse. So the best you get from the old man routine is having one pretend to loose control of his ride and roll down a hill as people try to save him.

Watch this film if your feeling really juvenile, or have a good buzz going. It is about life without responsibility. It is about being free to do anything with repercussions. Alright, its about a bunch of Jackasses doing stupid and sometimes funny things. 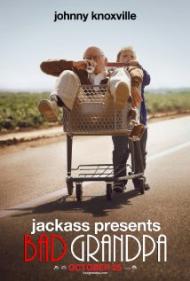