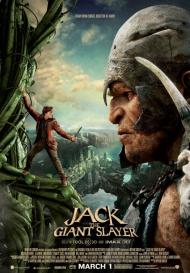 Jack and the Bean Stalk is a centuries old English folktale. The first printed version of the story appeared in 1807. It was an old tale even then having been passed along orally from generation to generation for many decades prior to this. It was first adapted as a motion picture by Edwin S. Porter in 1902. It has been redone in countless animated forms and television sitcoms. A feature length movie starring Abbott and Costello was released in 1952, the Three Stooges stumbled through their own short version, and Hanna-Barbera won an Emmy for their 1966 live action television special starring Gene Kelly. Not to mention the many other filmed interpretations too numerous to list here.

Jack the Giant Slayer is the latest screen adaptation of this universally recognized fable. Directed by Bryan Singer it also incorporates elements of the ancient Cornish fairytale Jack the Giant Killer, which told the story of a resourceful lad who slayed a number of giants during King Arthur's reign. The movie is colorful and vibrant. It takes the viewer on an exciting adventure that doesn't let up until the end. The CGI is the real selling point and it tends to overwhelm the story a bit, particularly the scenes involving the giant bean stalks (in this version there are more than one).

The original story was rather simple with a limited cast of characters. It was also morally ambiguous. Jack, a rather lazy boy, is told by his widowed mother to sell the family cow at market. Instead Jack trades it for some magic beans. His mother angrily tosses them out the window, where a giant beanstalk grows. Jack climbs up to a land among the clouds. He robs the Giant who lives there, climbs back down and chops down the beanstalk, killing the giant as he climbs down in pursuit of Jack. The end. Now did Jack really deserve the riches he stole from the giant? And didn't he commit a rather cold-blooded murder of a man who was simply trying to protect his home and possessions from an intruder?

This modern Hollywood version ups the stakes quite a bit and removes any morally questionable behavior from its hero. Jack is as honest and noble as they come. And the story is like Jack and the Bean Stalk on steroids. First of all there isn't just one lone giant. Oh no, there is an entire army of giants. They were defeated long ago in a battle against the ruler of this ancient kingdom's even more ancient ancestor, King Erik. As the movie begins these creatures have long ago faded into legend. There is also a princess and a fairytale kingdom for Jack to contend for. And just for good measure Ewan McGregor shows up as a heroic royal guard, although he doesn't compete with Jack for the princess's hand.

Children and adolescents are its target audience and they will find plenty to enjoy. Jack the Giant Slayer has enough action and adventure to mask its lack of story or character development. This is one of those pictures where you just sit back and let the movie magic wash over you. Whatever you do don't try to analyze or rationalize any of the logic involved. I detest 3D so I cannot comment on how well it was done here. I hope it's a passing fad that soon disappears. It adds very little to the movie going experience in my opinion.

Nicholas Hoult leads the cast as the titular hero Jack. The About a Boy star is now 23. He proves himself a competent actor even though he lacks true Movie Star charisma or looks (clearly the producers knew what they were doing when they cast McGregor). The remainder of the cast is filled with talented old pros like Stanley Tucci and Ian McShane. Bill Nighy provides the voice for one of the two-headed giant's heads. Bryan Singer certainly knows how to stage battles and film action sequences as his work on superhero movies has proven in the past. But somehow despite the timelessness of the source material, the talents of the cast and director, and the creative use of modern movie technology, Jack the Giant Slayer is still destined for the celluloid dustbin.

Patrick is too harsh on this enjoyable film. Sure, it's not perfect, but it's far from being destined for the dustbin. Patrick also seems to have a fairly low opinion of star Nicholas Hoult, but this marks the second movie of his within a month to open in first place (the other being Warm Bodies), so someone in Hollywood sees star quality within him.

The target audience might be a younger one, but not exclusively. This is a movie that anyone can enjoy, being played as a lightweight adventure story rather than as a dark, deep or twisted tale. Characters do die, but there is very little blood and the danger is accompanied by a sense of fun and a touch of comedy, such as when McGregor's Elmont is about to be cooked and is wrapped up, along with some literal pigs in a blanket of a dough.

Although the trend these days is towards more strong willed heroines, capable of fighting for themselves, the princess in this story is a bit of a throwback. She does have a habit of seeking out adventure, but when the trouble starts, she seems content with playing the damsel in distress, with Jack coming to her rescue time and time again. Even when the time comes for a magical crown to be worn that belonged to the princess's ancestor, it is Jack who dons it rather than the rightful heir.

I do agree with Patrick that the story doesn't always make logical sense, but then what story that includes giants living in a land above the clouds really could? This isn't a movie for thinking about too deeply. It's a movie for, as Patrick said, sitting back and enjoying. I'm not a fan of 3-D either, although I don't dislike it as strongly as Patrick. Even without that extra bit of eye candy, the visuals are still quite well done, especially the beanstalks, which are bigger and more elaborate than in any previous version of the tale.

For me, this likable cast, plus an exciting adventure tale that is capped off with some nice eye candy, adds up to a fun film that I could easily see myself watching more than once. 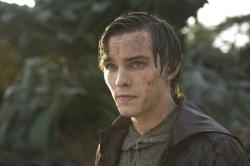 Jack the Giant Slayer is a special effects filled two hours of movie magic. Patrick seemed bothered by all of the CGI animation, but how else could you properly tell this tale? I do agree with him though about the lack of character development.

There are two stories being told here. The first is of the giants and the bean stalks that grow up to their world. This provides the excuse for all the computer animation, which are quite amazing. Whether looking at the castle from an aerial shot or the many different giants, your eyes never get bored trying to view all the details.

My favorite scene is when Jack tries to rescue Isabelle and Elmont from the disgusting Giant cook. It is also one of the film's funniest scenes. My son enjoyed it when Jack rode his horse like mad to warn the king of the approaching Giant army, but that effort becomes moot when the Giants burst through the trees in hot pursuit.

The second story is that of the budding romance between the princess and the farm boy. She is the intended bride of someone who clearly is up to no good. She cares not for him while he cares not for her either, other than the position the marriage will place him in. Isabelle and Jack are of two different social classes but from the opening scene we know they are intended to be together.

Then we have the inclusion of Elmont, the King's champion. Ewan McGregor is at his most dashing playing the role of hero but it is unclear what his role actually is here. He looks on awkwardly when Isabelle and Jack embrace. Elmont is very protective of Isabelle. Is it out of affection or merely duty? Either way, I never felt that I truly understood the dynamics of the relationships as presented.

As far as Nicholas Hoult's star quality, I will just add that as long as he stays within the limits of his charisma, he will have a long career. Take a look at his roles and you often find an outsider looking in. This is represented here as well as in Warm Bodies (2013) and in X-men: First Class (2011). His nervous stare is his money shot. (see above photo)