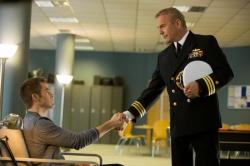 Jack Ryan: Shadow Recruit is the fifth movie (and second reboot) in the Jack Ryan film series. It is the final film featuring Tom Clancy's iconic character written by the author himself, who died in October 2013. It is also the first film in the franchise that isn't based on a Jack Ryan novel. Chris Pine (who also famously recreated the role of James T. Kirk in the Star Trek reboot) becomes the fourth actor to play Ryan following in the footsteps of Alec Baldwin, Harrison Ford and Ben Affleck.

It begins with a young John Patrick Ryan as a college student in London on September 11, 2001. After watching the terrorist attacks on the World Trade Centers on television Jack enlists in the Marines and serves in Afghanistan. He is seriously injured while on a mission and meets his future wife, medical student Cathy Muller (Knightley) while convalescing. He also meets veteran CIA operative Thomas Harper (Costner) who convinces Ryan to go back to school to earn his PHD and then come work for the CIA as an economics expert.

The movie then jumps ahead ten years. Ryan is a plant working for a large Wall Street investment firm. His employers don't know he really works for the covert government agency. He is living with Cathy who is now a respected doctor. Here's where the main plot kicks in. Ryan uncovers some suspicious banking activity involving a Russian company that happens to be one of the largest investors in his firm. (What is it with Ryan and the Ruskies? The Cold War has been over for decades and we've never suffered a domestic terrorist attack at the hands of the Russians, so why are they continually trotted out as the enemy in every single Jack Ryan movie?)

All of this leads Ryan to Moscow where the inexperienced numbers cruncher must learn on his feet how to act as an agent in the field. There are several decent action sequences including a brutal fight between Ryan and a large man (Anozie) sent to kill him in his hotel room. Of course Cathy winds up in Moscow too, as bait in harm's way. But she also gets to help out as Jack infiltrates the crooked Russian firm. The sequence where she has dinner with the villain while Jack sneaks into his office to steal important computer data is quite tense even though it's a bit implausible. Kenneth Branagh (who also directs) hams it up as the Russian bad guy complete with scary arm tattoos. But it's a part he could play in his sleep.

Shadow Recruit is fast-paced and fairly entertaining but it seriously lacks in originality. Nearly every scene features tropes of the espionage thriller that we've seen countless times before. When Jack sneaks into the Russian office building Thomas has a convenient bird's eye view from a neighboring building from which he's able to not only warn Ryan about the location of the security guards but he can pick them off with his sniper rifle as well. The climax takes place back in Manhattan where Ryan pretty much single-handedly foils an attempted terrorist attack on Wall Street that is meant to coincide with a planned economic disaster that is never fully explained. (That's not a spoiler since we all know Ryan would come out on top.)

Chris Pine makes a rather generic Jack Ryan. Although to be fair this sort of fits the character. His clean cut all-American looks also suit the role. At one point Costner's Thomas asks him if he can wipe that “Boy Scout on a field trip look off his face”. The difference between Ryan and James Bond or Jason Bourne is the fact that he isn't really a super agent at all. He's an office worker who always somehow finds himself caught up in the middle of some dangerous shit. But you just know he will always rise to the occasion by acting impossibly heroic. It's a tried and true formula that works. Still I couldn't help but wish they had injected a bit more originality into the story. 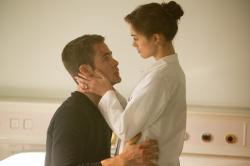 Patrick is right in that we have seen these archtypes before. On the surface, Costner is playing the mentor while Pine is the rookie. Knightly is the dutiful girlfriend/damsel in distress. However, there is a bit more depth to Ryan and Cathy and their relationship.

Jack Ryan is the ideology of the American male. He is smart but can fight back when necessary. He is respectful but strong willed. He is also optimistic in a way that is nearly exclusively American. Patrick mentioned Costner’s line to Pine about, “…wiping that Boy Scout on a field trip look off his face.” Pine’s smiling response is, “Not a chance.”

For the longest time, American movie heroes were about honor. See Humphrey Bogart or John Wayne movies for good examples. We had the gritty urban hero that Clint Eastwood and Charles Bronson so defined. Then we had the mindless action hero. See any number of Stallone or Schwarzenegger movies. We have the super spies that Patrick mentioned. Jack Ryan is unique to this list in that he leads with his brains and not his brawn.

Cathy is a self-reliant goal oriented woman. Like Ryan, she has a doctorate and is smarter than most movie wives. She loves Ryan but knows something is going on with him that gives her pause when it comes to his marriage proposal. Her discovery of his secret explains his actions and her suspicions. It is only after she knows that she can trust him that she accepts his proposal.

Although we know from the previews that he will have to save her, Cathy, in fact, first saves Jack. When he is in the hospital, she encourages him to not give up while also getting him to not rely on the meds. Without her, he may not have turned out to become the man he did.

The best scene in the film as far as their relationship goes happens shortly after the tense scene Patrick mentioned of Ryan sneaking into the office building while Cathy distracts Viktor. Ryan and Thomas are trying to figure out what Viktor’s next move is while Cathy looks on. Ryan’s brain is working overtime as it is running through information while snapping out instructions to people manning computers. Cathy, for the first time, is witnessing Jack do what he does best. It is in that moment that Cathy is finally aware of whom Jack Ryan is, professionally speaking.

Chris Pine is one of many actors who broke into films because of his looks but with roles like this, is distinguishing himself as a very competent actor. He is convincing as a wounded veteran and a man in over his head when he suddenly becomes an active field agent. His look of fear while walking through Moscow and talking to Cathy on the phone is subtle but very humanizing. I hope Pine is able to make a few more Jack Ryan movies before the role is passed onto yet another “all American” looking movie star. Maybe by then Hollywood will have grown big enough balls to make Muslims the bad guy. 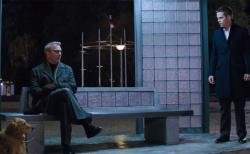 Like my brothers I'm a bit puzzled at the choice of villain in this film. If they wanted to make the Russians the bad guys, then why not make this a prequel instead of a reboot and set it in the 1970s or 1980s? And if they'd rather keep the plot set in contemporary times, why not make the villains Middle Eastern or North Korean or some other part of the world where Anti-American sentiment runs high?

As Eric pointed out, Chris Pine broke into films based on his looks, but where he sees him evolving into a competent actor, I say that it's the looks that are the the only thing keeping him in work. He fits the suit well enough, but he brings nothing special to this part. It doesn't help that Ryan is such a boy scout with very few nuances. However, the same was true when Baldwin and Ford played this character and they managed to bring some depth to the role.

The action scenes are well done and tense enough, but as Patrick pointed out they are also implausible, although where he says, "a bit", I say "very". Are you seriously telling me that Jack is the only person who can break into Cherevin's office? Wouldn't it make more sense for Jack to keep Cherevin occupied over dinner while someone else breaks into the office? Instead we have a contrived scene where Cherevin doesn't find it odd that Jack, someone he already suspects and tried to kill earlier, takes a walk during dinner. And are we also supposed to believe that Cherevin keeps his top secret plans to decimate the USA behind a password that his American financial partners know? If that password opened those files, then why is it that Jack needed to go to Moscow anyway?

If you don't think about things too much, the action is enjoyable, particularly the well-filmed fight scene in the hotel room. Of course stopping to think about why Cherevin wanted Jacked killed won't help matters since when they finally meet Cherevin has already sold all of the questionable accounts that drew Jack's attention in the first place. Trying to kill him only draws attention to his guilt.

The most interesting character to me was Costner's Harper. There's a mystery about him that is lacking in Jack. I wanted to know more of his backstory. If they do make a sequel to this film, I hope that Costner comes back along with Pine.

If the casting of Pine and making this an origin story was intended to bring a young audience to the franchise, the filmmakers failed. More than a third of the film's opening weekend audience was over the age of 50 and just 15% were under 25. It also opened with a lower box office than all previous films in the franchise, despite opening in more theaters and with the benefit of inflation.

Despite my heavy criticism, I did enjoy this film at a very basic level. If somehow a sequel does get made, I hope they start with a smarter script than this one.