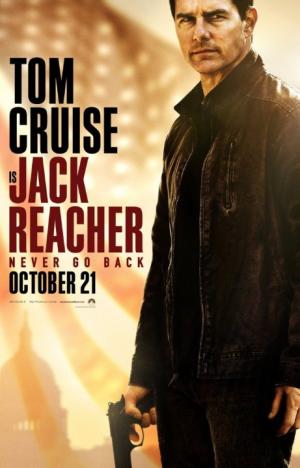 Tom cruise is at a point in his career where he cannot get any more famous and filling his bank account is merely piling money on top of money he will never need. This means he can choose projects because he wants to involve himself in them and not do others because he needs to. Here he not only stars but produces Jack Reacher: Never Go Back. Although I think Tom Cruise is a decent actor I never saw Jack Reacher on screen. What I saw was a fifty something year old man trying to play an action hero. Reacher is described in the book as a blond, 6'5", 250lb, 50-inch chested bad ass loner who washes his clothes in motel sinks. Cruise is a 5'7", chest shaven former pretty boy who looks to have botox injected cheeks.

I bring this up because the film begins with Cruise having already beat up four men in a diner. Not only is that a stretch of the imagination but he is merely sitting at the counter waiting for the law to show up. Once they do, he embarrasses them and shows off. Granted they are bad cops and he is waiting for the good cops to show up but why did he not just call the good cops from the start and avoid the fight altogether? It is not as if we even see it. And what is the point of the phone call to the bad sheriff? Reacher is then shown walking past the good police without ever being questioned and onto his next adventure, even though they would require him to stick around for the trial.

Anyhoo, Reacher decides to meet up with a female army officer he has only talked on the phone with in Washington DC. Upon arrival he discovers that she has been arrested and he soon finds himself in the middle of government collusion and illegal activity involving the killing of innocent soldiers, smuggling and a bunch of domestic terrorism. On top of all of that, a teenage girl enters his life who may or may not be his illegitimate daughter. But hey, this aging diminutive pretty boy can handle anything, whether it be escaping from prison or falling off a building.

There is plenty of action to keep you entertained but it sometimes does not work. One ridiculous action scene involves Reacher suddenly surrounded by four baddies who just happened to know which dark abandoned alley he would walk down and cut him off at the crossroad. He easily gets away from them but then waits for them to catch up so he can fight them all bare handed. They show up with guns and instead of simply shooting him on sight, give him to time to talk and of course fight his way out of a situation he should have never even been in.

Jai Courtney nearly stole the first movie from Cruise. He played the heavy but showed some real screen presence. This time the enforcer is played by Patrick Heusinger, who resembles Courtney. He likewise makes an impression. We understand his character's motive and he seems to truly enjoy his work.

Jack Reacher in the books sounds like an interesting character. He is a loner who proudly lives off the grid, wandering to what ever places he wants, occasionally having anonymous sex. This makes him a veritable free man. I believe every man who ever lived has, at least once, wondered what such a life would be like. Add his attraction to mysteries and solving crime and you have as human a superhero as you can get. Author Lee Child even describes him as a "knight-errant".

That character interests me and I may even pick up a Jack Reacher novel next time I am in a book store. However, Tom Cruise's Reacher is rather dull. He does not have sex. He acts depressed half the time. His tone is sometimes sanctimonious and his ego a bit over blown. Yeah, he helps people but it almost seems like he does it just so he can reinforce his belief that he is smarter than everyone else. Maybe too much of Cruise came through the screen. 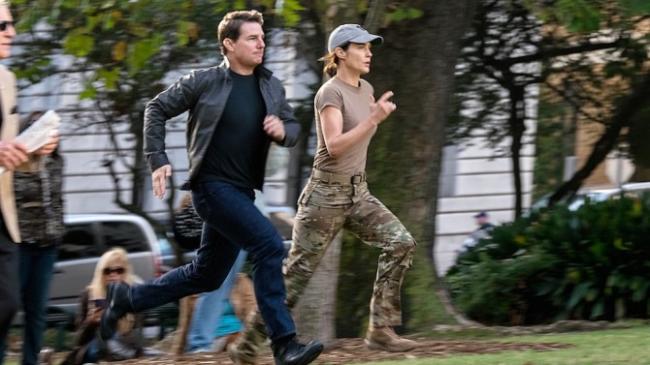 Like Eric wrote, Tom Cruise is quickly becoming an elder statesmen of the movies. He's been famous longer than the Millennial Generation has been alive and at 54 he is beginning to show his age. But like John Wayne and Clint Eastwood before him he will likely continue to play action heroes long past the age where he should realistically be able to. But then that's Hollywood for you. He has at least kept himself in good enough physical shape to still plausibly pull off the many fight scenes. And as he has done in nearly every movie he's ever made, he has several running scenes (see photo).  Clearly he has spent time on a treadmill.

Jack Reacher: Never Go Back takes a small step down from the first movie.  It has some pretty bad dialogue.  Like the scene shown in the trailer where Cruise is in the diner and the pay phone starts ringing.  "It's just gonna keep on ringing."  He says with all seriousness as if a ringing telephone itself is somehow menacing.

Never Go Back has a distinct feminist message.  The other two main characters are both female and they both give as good as they get.  The scene where Reacher and Turner argue over which of them should stay with the girl in the hotel room while the other goes out on a dangerous mission is the most obvious example but all through the movie there are feminist points being made in the form of the relationship between Reacher and these two main female characters.

Tom Cruise can likely continue making action movies for another decade at least, but I wish he would stretch himself as an actor once in a while by making other films as well. 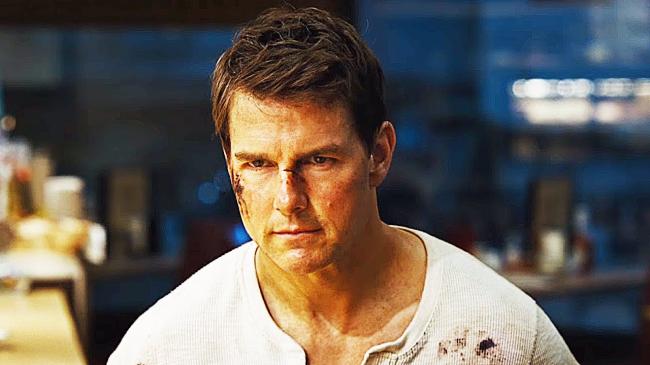 Tom Cruise returns in the role of Jack Reacher under the direction of Edward Zick, doing what he does best. He smiles and broods. However, he remains THE preeminent male movie star of his generation, bar none. Apart from fellow Tom, Tom Hanks, he is the only movie star from the 1980s still regularly headlining movies. As Patrick noted, he rarely stretches himself as a performer anymore. He seems more interested in remaining a movie star than he does honing his acting craft. It's as though he's afraid to stop running, both literally, as noted above, and figuratively. Perhaps he's been making movies for so long that he's afraid that if he stops now, he'll never get started again. Certainly something is driving him since presumably he has more money than he'll ever need and it seems nearly impossible for him to become more famous than he already is. However, this concern to keep working at all costs means that unfortunately he has become less circumspect about the quality of his films and he keeps churning out middle-of-the-road actions films like this one.

I have to admit, I went into this movie expecting to like it. I enjoyed the original somewhat and expected its sequel to be at least as good. However, as I left the theater, my primary feeling was disappointment. It wasn't just the plot holes or the badly written scenes, like the one in the diner that both my brothers mentioned. It was more a disappointment in the lack of suspense and real tension. Never once did I feel Jack Reacher was in danger. In this film he becomes a walking Superman, capable of any feat or action, able to come through it all unscathed, except perhaps for a sexy cut here or there.

Maybe one of the reasons Cruise keeps working and why he chose this character is something toward which Eric hinted, and that is his height. At 5' 7", Cruise has spent his entire adult life pretending to be taller than he really is. Despite all the fame and the money, that has to have had an effect on his male ego. Is it any wonder that he would leap at the chance to play a character described as 6' 5"? Not because he thought he could pull off that height, of course, but because it would give him the chance to prove he could be just as badass as a character who is that tall.

Certainly ego, perhaps tinged with insecurity, seems to play a big part of the Cruise persona. A recent appearance on the Graham Norton show where he was promoting this movie, saw him bragging about his ability to hold his breath for over six minutes. Perhaps this self love is why Cruise so rarely has a romantic chemistry with any of his co-stars. There's no room in a Cruise movie for him to love anyone but himself. Certainly that is the case here where he shares zero romantic chemistry with co-star Cobie Smulders. Their relationship is set-up to be a flirty one, but the flirting falls completely flat. He shares a better relationship with Danika Yarosh, playing his "daughter", than he does with Smulders.

Following 1986's The Color of Money, Cruise seemed to find a mentor to emulate in Paul Newman. And you can definitely find similarities between the two stars' careers. Like Cruise, Newman was often seen as a pretty boy, nominated for Oscars, but never winning, and as he aged, Newman made a few forgettable movies until he finally settled into the role of aging star. Perhaps Cruise will eventually reach a similar point in his career and he too will finally gain some recognition for more than just his ability to run fast and flash a winning smile.

I suppose it is possible to enjoy this movie at a very shallow level, just check your mind at the door. Thinking too much will definitely kill your enjoyment of it. 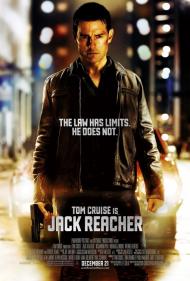