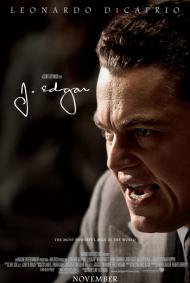 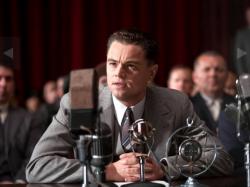 J. Edgar Hoover was a contradictory figure. On the one hand, he created an efficient crime fighting organization and helped to modernize policing, overseeing an FBI that solved many crimes and put away many well known criminals. On the other hand though, he was a megalomaniac who used and abused his department to keep himself in power for nearly 50 years. He was also someone who demanded impeccable standards of behavior from his agents, but yet lived a lie with reports of his closeted homosexuality and transvestism. Making a movie that fully captures this complex man is certainly a challenge for any filmmakers. Director Eastwood, star DiCaprio and writer Dustin Lance Black do their best and the result is a fascinating look at an interesting character, but the film itself is flawed.

Hoover's story is told in two intercut time periods. We see him in the 1960s through the early 1970s, but there are also flashbacks to the 1920s and 30s as we see the birth of the FBI. These flashbacks take the form of Hoover telling his story to a string of young FBI agents who are writing the "official" history of the Bureau.  What's interesting about this method of telling the story is that in the past we're seeing Hoover's version of the story, and later we learn that not everything he's said was true. Other flashbacks take the form of Hoover's personal memories and it's in these moments that we learn the personal details of Hoover's life.

According to this film, there were three people of lasting importance in Hoover's life.

First and foremost was his mother, played here by Judi Dench. A religious woman who doted and dominated her son. You'll lose count how many times you hear Edgar say, "Yes, Mother." It is partly because of her hold over him that Edgar is never able to find personal happiness. At one point, in so many words, she tells him that she'd rather have a dead son than a gay one.

Second, was Helen Gandy, portrayed by an under-used Naomi Watts, his personal secretary of 54 years. They begin their relationship on a few dates, but the fact that Edgar's idea of a date spot is the library of congress, is a good indicator of where their relationship is headed. Following her rejection of him, their relationship becomes strictly professional, but given how long they worked together and how much he trusted her, I have to think that this movie skims over how deep their feelings must have been for each other. I don't mean romantically, but Edgar trusted her in a way that he trusted no one else.

The third figure that dominated Edgar's life was Clyde Tolson, Edgar's right hand man and unconsummated (according to this movie) love of his life. There's an instant attraction between Clyde and Edgar and they come close on at least one of occasion of making their relationship physical, but Edgar can not bring himself to go against his upbringing.

DiCaprio delivers another Oscar worthy performance in the lead role. He plays Edgar at different ages and plays it convincingly at both. This is an egotistical, arrogant and deeply insecure and paranoid man and DiCaprio delivers a multi-layered performance that is sure to feel the love at awards time. He so dominates this movie that it's really a one man show.

Of the supporting cast, Dench is best. Her relationship with DiCaprio is both loving and creepy at the same time. As I said, Watts is under used and her relationship as Helen with Edgar, is never as fully explored as it could have been. Armie Hammer has the most important supporting role and is the most disappointing member of the cast. He makes a very unconvincing old man and in his most dramatic scene, DiCaprio acts circles around him.

The constant cutting between the time periods is interesting but doesn't necessarily add anything to the story that telling it in chronological order wouldn't have done. I also have my usual complaint that the movie runs too long. It's well over two hours and there's plenty of room for editing and tightening.

A complex man doesn't necessarily need a complex story, in fact, I might argue that with such a complex character, the simplest method of telling his story might be the best one. In any case, this is a great performance inside just a good movie. 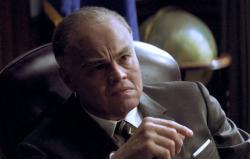 DiCaprio as the older J. Edgar.

As depicted in this movie J. Edgar Hoover was a repressed homosexual with mommy issues. His relationship with Clyde Tolson has all the dynamics of a marriage, only without the sex. Some may argue that this fact makes it seem even more like a marriage. At any rate he was certainly a complex human being, reigning with an iron fist over the FBI under 8 Presidents, from Calvin Coolidge to Richard Nixon.

The Flashback scenes focus mainly on the infamous kidnapping of Charles Lindberg’s baby. It was the most famous case Hoover was ever personally involved in. The time period of the 1930s is vividly recreated. After Hoover becomes famous as the national face of G-Men he reluctantly admits under oath that he never actually made an arrest. He quickly remedies this by accompanying his men on jobs as they bust criminals and then highly publicizing it. The man had a huge ego and loved the spotlight.

As a huge fan of 1930s Hollywood several scenes stood out for me. Two James Cagney pictures are briefly shown. One, The Public Enemy, is typical Cagney gangster fare. The other, G-Men, has Cagney on the side of the law playing an FBI agent. Ginger Rogers and Shirley Temple both show up in different scenes. The actress playing Rogers doesn’t particularly resemble the real woman and just why Shirley Temple is attending the premiere of G-Men is never explained. She was under contract to Fox and G-Men was made by Warner Brothers. But perhaps I am nitpicking?

The movie certainly picks and chooses which aspects of Hoover’s life to shed a light on. We see him in a confrontation with Robert Kennedy and his unsuccessful attempt to intimidate Martin Luther King into refusing the Nobel Peace Prize. He is also shown as a borderline paranoiac, seeing a communist under every bush.

Leo does an impressive job playing such an iconic figure. He buries himself in the part and alters his speaking voice. Hollywood loves it when an actor drastically changes his appearance, be it extreme weight loss or gain, or by playing a much older character as DiCaprio does here. Is Oscar gold in his future? We’ll know soon enough.

The movie’s structure can be annoying at times. It not only moves back and forth between young Hoover and old Hoover it also jumps around, seemingly at random, during both of these periods. It is chronologically challenged. The result being that the order in which events took place can be confusing.

J. Edgar attempts to reveal the inner life of one of the most famous and influential Americans of the 20th Century. It only partly succeeds. As the ending reveals, Hoover’s personal files were never found, which means that many of the private scenes are speculation. Still it’s a fairly fascinating look at the man and it gives DiCaprio a chance to play a really juicy role. 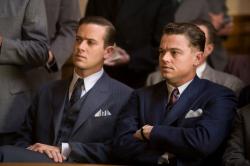 The details of the relationship between Hoover and Tolson will likely never be completely known.    Do an image search on the two of them and you will find a bunch of photos of them together, often in matching suits, sometimes sitting comfortably close.  The picture to the right is a common pose found between the real Hoover and Tolson.

According to an article written by Beverly Gage for Slate.com, 11/10/2011, Hoover wrote a letter to Tolson that stayed in Tolson's file.  "Words are mere man-given symbols for thoughts and feelings, and they are grossly insufficient to express the thoughts in my mind and the feelings in my heart that I have for you,” Hoover wrote to Tolson in 1943. “I hope I will always have you beside me."

One rumor was that Meyer Lansky, a Mafioso boss and inspiration for Hyman Roth in The Godfather Part II, had photographs proving Hoover was a homosexual and used them to stop the FBI from investigating him.  The photos never surfaced.  The most famous rumor was that Hoover cross dressed.  It has never been substantiated, but the film includes a scene of Hoover putting on his mother's dress after she dies.

The movie makes a point to keep Hoover's and Tolson's relationship sexless.  It does however, present them with some romantic situations.  When Hoover asks Tolson to be his right hand man, Tolson smiles and insists that they have lunch together every day.  The scene in the hotel, with the fight, has Tolson tell Hoover that he loves him in a most casual way.  Hoover immediately talks of dating Dorothy Lamour and taking a wife.  This upsets Tolson and it leads to the fight.

According to J. Edgar, Hoover was a bitter man because he never found completely satisfying love.  Tolson, as depicted in this film, loved Hoover but they never consummated their relationship.  This film makes the argument that had Hoover and Tolson boned each other silly, Hoover may not have been so bitter.  I am not sure this movie got Hoover right, but it is as accurate as any film bio can likely be about him.