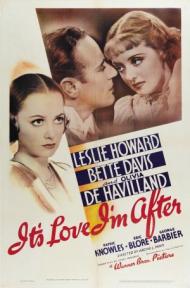 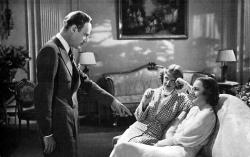 Although she is primarily remembered as a fiery dramatic actress, Bette Davis also appeared in several comedies. It’s Love I’m After is a delightful theatrical farce that reunited Davis with Leslie Howard with whom she had already made two successful dramas, Of Human Bondage and The Petrified Forest. This was their final movie together.

They play Basil Underwood and Joyce Arden, darlings of the American stage. They are the reigning IT couple of the theater as famous for their on again/off again wedding plans as they are for their Shakespeare. The movie opens with them performing the death scene in Romeo and Juliet on New Years Eve at a Los Angeles theater. The two of them whisper cruel insults in each other’s ears as they mime tragic and romantic gestures for the audience.

Olivia de Havilland plays Marcia West, a young woman in the audience that night. She is engaged to Henry Grant (the reliably handsome Patric Knowles) but is smitten by the charms of Basil as they come flooding across the footlights. The silly plot involves Henry, whose father was a close friend of the actors, requesting that Basil spend the holiday at the home of Marcia’s parents with the intention that he behave like a cad in order to deter the blossoming feelings Marcia has for him. Joyce shows up and complicates things further.

This situational comedy of manners is exceptionally entertaining. Leslie Howard hams it up as the egotistical actor. He spouts lines like, “After all, what am I? Just the greatest actor in the world.” His relationship with his effeminate and very dedicated valet Digges (the hilarious Eric Blore) creates many laughs. Basil is forever asking Digges how a certain line from a play went and then launching into a soliloquy. For his part, Digges is clearly in love with Basil and there is plenty of obvious gay subtext for anyone wishing to see it.

Bette Davis likewise chews much scenery as the hot tempered Joyce. Although hers is the smaller part she has several memorable moments arguing with Basil. One bit was so popular that she recycled it with James Cagney in The Bride Came C.O.D. four years later. Joyce goes into her room, slams the door and begins piling furniture in front of it to keep Basil out. He gets his man-servant to keep pounding on the door and then surreptitiously climbs through the window and sits watching Joyce.

Olivia de Havilland steals the movie as the innocent, enthusiastic and headstrong Marcia, doggedly clinging to her infatuation with Basil no matter how much of a bounder he becomes. She steadfastly defends him at his rudest by rationalizing, “What are manners? Little rules for little people!”

This is the type of comedy Hollywood has forgotten how to make. The dialogue is witty and intelligent, the actors urbane and sophisticated, the sets and clothes glamorous. It’s Love I’m After is 90 minutes of breezy cinematic joy.