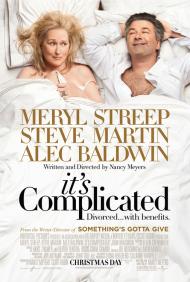 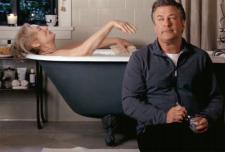 Jane and Jake have known each other for more than 35 years, but still do not know if they are meant to be together.

It's Complicated is a romantic comedy intended for the empty nest age group. With that for it's target audience I assumed this would be a mature look at love for those getting close to their golden years. I was wrong.

Jane has been divorced for ten years and is sending her youngest daughter off to college, while her son is about to graduate from college. Her oldest daughter is engaged. While attending her son's graduation, Jane hooks up with her ex-husband, Jake, who is remarried to a much younger woman. They start having an affair. She also finds herself attracted to an architect, Adam, that she has hired to remodel her home.

Streep and Baldwin are great acting like two love struck morons. The discovery that they both still do it for each other is a nice change of pace. Too often romantic comedies are about young, attractive people. Much is made of Jane and Jake having plenty of water under the bridge. In one scene, Streep visits a plastic surgeon to discuss some excess skin under her eye. Baldwin does a nude scene, and makes a couple of comments on his large belly.

Although they acknowledge they are older, they too often act immature. The first time Streep (who is 60 in real life) and Baldwin (who is 51) have sex is after a night of heavy drinking. Later they, along with Martin (64), smoke pot and get high. It causes some emotions to get revealed. For such a mature, successful group of professionals, it seemed odd that the only time they could let loose was when they were under the influence of a drug. What is the point of having a romantic comedy about older folks if they just end up acting young?

The best thing the movie has going is the cast. I hate Baldwin’s politics, and smiled when the lady behind me said that she hopes she can stomach an entire film with him in it. However, he has a knack for comedy, and gets some of the biggest laughs in the film. Streep is as natural as ever. She does what she can with a character that seems a bit uneven. Martin gets less screen time but reveals a sensitive side. At 64 years old his face looked fake. Why do these actors keep trying to look young when they are playing characters their own age? Krasinski is worth a couple of laughs as the fiancé who knows too much.

The movie runs a bit too long and Just when you think it will have a nice romantic ending, it all becomes ambiguous. No movie should ever leave the audience guessing. The film makers get paid to complete the story, not the ticket buyers. 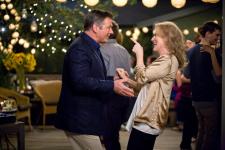 Baldwin and Streep do their best with what they are given.

The thing about It's Complicated is that it really isn't that complicated. Having a fling with an ex is a pretty common thing. And these aren't kids having the affair, they're both supposed to be at least in their 50s so they've had some water under their bridges. Streep's Jane owns her own business and has grown children and seems perfectly grown-up and mature in all aspects of her life except her love life when she suddenly reverts to being a child. It's not very convincing or believable.

Personally I never care about an actor's politics. I also don't care if they're difficult on the set or rude to their mother. All that matters to me is what they do onscreen. And Alec Baldwin is one of the brightest spots in this movie. Anyone who watched him host Saturday Night Live over the years knew that he had great comic ability and finally late in his career he's making a living off it. He and Streep share a nice chemistry together.

The rest of the cast is equally talented. Streep is...well Streep. Is it possible for her to give a bad performance? And Martin is as likable as ever in the smaller part. Like you mentioned Eric, Krasinski also gets a few funny moments when he learns what's going on with Jane and Jake. With this cast this should have been a better movie.

It's the writing that is the real problem. The ending is weak and it runs too long. It's a romantic comedy that isn't very romantic.

I might chalk up my feelings toward this movie to my not being its target audience, but my wife, who is normally a sucker for a good romantic comedy, was left as equally cold by it as I was.

The ending didn't really bother me. It didn't matter to me that I didn't learn exactly what happens to them because frankly I just didn't care. 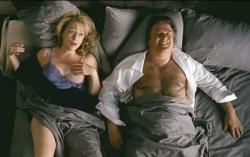 Meryl Streep and Alec Baldwin have great chemistry together.

Sure Streep’s Jane acts less mature in her romantic dealings than in every other aspect of her life. But remember this is a woman who was married young and for 20 years to the same man, the father of her 3 children. Finding yourself suddenly single in middle-age must be a life altering experience and would take years to adjust to. You would need to relearn how to relate in social/sexual situations wouldn’t you? And besides all that this is a romantic comedy so you have to be willing to allow a few inconsistencies in the characterizations.

Meryl Streep and Alec Baldwin have great chemistry together. The talents of Steve Martin, on the other hand, are wasted.

The real problem with the movie is that it is neither funny nor romantic enough. The script needed another rewrite. I agree with you Eric that the ending needed to be bigger and more definite. Here’s how I would have ended it: On the eve of her marrying Martin’s character he should have been revealed to have some insurmountable flaw that would have cleared the way for a music swelling, happy ending with her ex-husband. That’s how it would have ended in a Cary Grant/Irene Dunne comedy from the ’30’s. This isn’t an art house film it is a big Hollywood rom-com and the ending should be a given; the joy should be in the journey getting there.