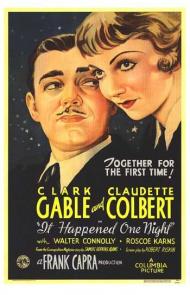 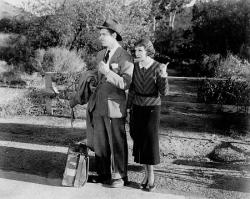 In 1934, It Happened One Night was released to both critical and popular success. It was based on a short story, Night Bus, which was first published in Cosmopolitan and it featured two of the most popular stars of its day.

It went on to win all five major Academy Awards; Best Picture, Best Director, Best Actor, Best Actress, and Best Screenplay. This was the first movie ever to win those five and it would be forty-one more years until it would happen again, when a very different movie, One Flew Over the Cuckoo's Nest, would repeat the Oscar sweep. Silence of the Lamb's is the only other movie to have also won those same awards.

The quintessential screwball comedy, It Happened One Night tells the story of Ellie Andrews, a spoiled heiress who has married against her father's wishes. He holds her hostage on his yacht in Miami while he attempts to get the marriage annulled. The ever resourceful Ellie escapes the yacht and begins her journey to New York where she hopes to reunite with her new husband, King Westley, and live happily ever after.

On the bus to New York, she meets up with Peter Warne (Clark Gable), a drunken reporter. From the moment Ellie falls on Peter's lap when the bus starts moving, and he quips to her, 'The next time you drop by, be sure and bring the folks.', and she smiles in spite of herself, you know they are destined to be together.

The bulk of the movie tells of their often hilarious trip by bus, on foot, and by stolen car as Peter helps Ellie on her way to New York so she can find King, and he can get the story of a lifetime. Of course, over time they fall in love and by the time they have reached New York, Ellie is ready to marry Peter instead of King, but again, of course it isn't that easy.

The movie contains funny scene after funny scene, many of them cinematic gems. The night at the motor lodge in which Peter ties the blanket between their beds and declares it 'the walls of Jericho', ranks right up there as probably one of the most famous scenes ever filmed. And the morning after, when the detectives show up and Peter and Ellie improvise a scene as man and wife, has to be the funniest scene in the movie. The chemistry between Gable and Colbert fairly drips from the scenery.

Gable who was one of, if not the, biggest male star of the 1930's, is remembered today for really only two roles. This one and Rhett Butler. Anyone who ever doubted his ability to act should watch this movie and Gone with the Wind. His range is phenomenal when these two movies are viewed side by side. As the flippant Peter Warne, his quick wit and charming grin make him the perfect romantic lead, and as Rhett, while he may share Peter's cockiness, he also shows enormous dramatic depth. He wasn't known as 'The King' for nothing.

Claudette Colbert, although not as well known as Gable today, is perfect as the spoiled brat; Ellen Andrews. Her playful cuteness and innocence are the perfect foil to Gable's worldly reporter. She matches him line for line and together they generate some of the best on screen chemistry ever seen.

Ranked number 35 on the American Film Institute's greatest films of all time list, It Happened One Night is a true classic in every sense of the word, one that withstands the test of time and indeed defies it completely. 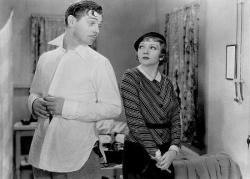 Scott has done a wonderful job reviewing this brilliant film, I agree completely that this is one of the funniest, best written and finest acted movies ever made, besides being hands down the most awarded comedy of all time. A truly memorable cinematic experience that should be viewed by all who love movies.

Gable and Colbert are indeed perfect and Frank Capra directs flawlessly without pandering to his well-known sentimental streak. It Happened One Night starts quickly and never lets up. If all comedies were paced like this one, movies would be far better off than they are today.

A few of the classic scenes in this movie worth mentioning include Roscoe Karns hilarious turn as the sleazy salesman Oscar Shapely 'Shapely's the name'. He attempts to pick Ellie up on the bus but ends up being scared off by Peter in a wickedly silly manner, which, in my opinion, is Gable's finest scene. The entire bus singing 'That Daring Young Man On The Flying Trapeze' is also completely charming and of course there is the now legendary hitch-hiking scene. As it turns out Peter may be more capable of surviving in the real world but Ellie proves there are some things a woman can do better.

What more can I say except It Happened One Night is the kind of classic movie that happens only once. 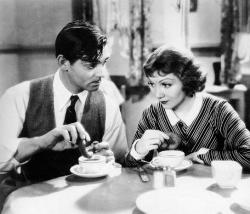 It Happened One Night was made in 1934. A mere seven years after the first talking film was made. Yet, as stated above, it is timeless.

As anyone who has ever enjoyed television shows like Friends or Seinfeld knows, good comedy is not just about situations or gimmicks. Good comedy is also about timing, delivery and the talent of an actor. For delivery and timing watch the scene in the cabin where Gable and Colbert bicker back and forth.  "QUIT BAWLING! QUIT BAWLING!"

Gable is remembered as a romantic lead. Look, however, at this movie and witness his immense comedic talents. The scene at the beginning where he is an inebriated hero to a bunch of drunks is great.   Some of his best work comes near the end when he talks with Ellie's father.

My favorite scene of his is the hitch hiking one, where he brags endlessly about his hitch hiking talents only to be upstaged by Colbert. His expression after they get a ride is a brilliant punch line.  Gable says to Colbert, "Why didn't you take off all your clothes? You could have stopped forty cars."  Colbert responds, "Well, ooo, I'll remember that when we need forty cars. "

The story of a couple that meet, fight a lot, and then fall in love has now been done countless times in movies and on TV. Just remember though, that It Happened One Night did it nearly 70 years ago and no one since has done it better.