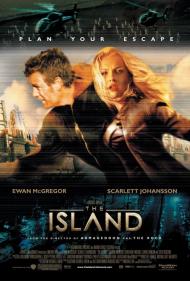 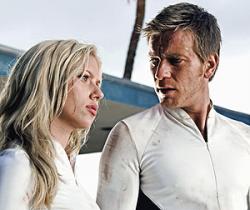 Scarlett Johansson and Ewan McGregor in The Island.

The Island is an action packed Sci-Fi adventure that carries all the hallmarks, both good and bad of your typical Michael Bay film. It contains huge action sequences that rarely let up; sacrificing thoughtful commentary for the sake of explosions, and character development for car chases. Big and bloated, it still manages to entertain, thanks in large part to its two talented leads, Ewan McGregor and Scarlett Johansson.

McGregor stars as Lincoln Six Echo, a man living in a futuristic complex with hundreds of other survivors of the end of world. Everyday they are told that there is only one place left on the outside world that remains livable; the Island. Their existence is a regimented and sterile one. Fraternization between the sexes is frowned upon and perfect health is mandatory. The one thing that everyone lives for is a chance to win the lottery, the prize for which is a one way ticket to the Island.

Lincoln though, has begun to question his surroundings and his purpose. Plagued by dreams and intrigued by odd conversations with computer technician McCord (Buscemi), he's started asking questions that are making the complex's Doctor (Bean) very nervous. After discovering a living moth, Lincoln follows it up a ventilation shaft and finds himself in a part of the complex he's never been in before. Here he learns the truth of his existence. He and everyone in the complex are clones and the Armageddon story is fiction invented to keep them all afraid of leaving. His purpose is to serve as spare parts for his real life counterpart in the outside world. Winning the lottery means that your "Sponsor" is in need of one your organs. Upon learning this, Lincoln decides to make a run for it. Stopping only long enough to grab his closest friend, Jordan Two Delta (Johansson) who just today was scheduled to leave for the "island", he manages to escape. The rest of the film is their race for freedom.

While the first act of the movie poses some interesting moral questions, the final two-thirds never answers them and will be more enjoyable if you don't question anything, as one action sequence follows another. There are futuristic car chases, innumerable explosions and even a shootout on the side of a skyscraper, all carried out with director Bay's trademark flair for excess.

Grounding the story and keeping you with it are McGregor and Johansson, both serious actors. Their wide eyed innocence and desperate fight for survival in the middle of all the action helps keep it plausible and forces you to care about their characters. They both manage to keep their heads above the water of action overkill, especially McGregor who gets to play an amusing sequence with himself when the clone meets his "sponsor". The two leads also get a humorous scene when they have sex for the first time, or as Lincoln puts it, "That tongue thing is so cool."

With the technology for cloning quickly becoming a reality and the controversy over stem cell research a current topic, there was plenty of room for this movie to make a statement, but it never does. And maybe I'm expecting too much from a summer action movie directed by Michael Bay, but a few less explosions and a little more weight to the subject matter could have turned an action flick into a Sci-Fi classic. 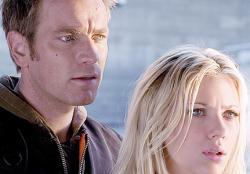 Ewan McGregor and Scarlett Johansson in The Island.

One of Hollywood's biggest problems is that it never wants to offend anyone. Okay, I amend that statement. Other than Christians, conservatives and overweight people, Hollywood never wants to offend anyone. You cannot help but think of stem cell research as you watch The Island. Supporters of stem cell research have been spouting the need for it because it may help people survive and overcome medical problems. Other than showing that the President of the United States has a clone, The Island never gets political.

That is unfortunate, because The Island could have been a thoughtful film. But remember this; it is the liberals who are all in favor of stem cell research and this movie does not put it in good light, so of course it will steer as far away from condemning it as possible. The bad guys in the movie are, of course, stereotypical capitalist money grubbers.

Bay does action well but the action sucks the drama out of the movie. The final scene should have felt more liberating than it does. The action scenes distract so greatly from the emotional center of people being used to harvest organs that I found myself caring less about their plight. A little more character interaction and less grandiose action sequences could have added more depth and thus meaning to this movie. Also, having the balls to take a stand on stem cell research, for or against, would have added greatly to the films meaning. As it is, Bay reduces this potentially thought provoking movie to merely a good action film. 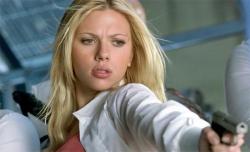 Scarlett Johansson in The Island.

The Island has nothing whatsoever to do with stem cell research. It is about full fledged cloning and, as portrayed in the movie, it takes a very clear stand against it. Yes, some of the action was a bit much, but I think the character development of the two clones was handled decently.

This is the kind of movie that is better if you have no idea where the plot is heading. If you stumble across it late at night on a pay channel and let yourself get caught up in the story it will be very enjoyable. If you ask me this is the perfect "Guy Movie". The beginning is intriguing without being too deep or confusing. The main character is a man who saves a hot female who becomes his companion and then lover. All of this is followed by a helluva lot of action. What more does your average man want from a movie?