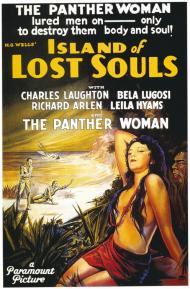 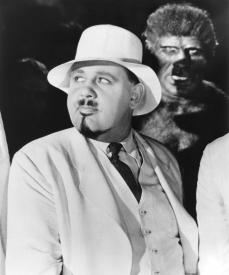 Charles Laughton as the creepy Dr. Moreau in Island of Lost Souls.

Island of Lost Souls is a story in search of a plot.  Adapted from H.G. Wells' "The Island of Dr. Moreau", it certainly has a good enough pedigree, but while things happen in the movie, it feels more like a series of events than a plot.  Instead of trying to make any sort of point about god or science, it's more content to play up the sex and horror in the story and so doesn't really say anything at all.

Edward Parker is the sole survivor of a shipwreck.  He's picked up from the ocean by a passing ship, but when he angers the captain, he is dropped off along with the cargo on the mysterious island of Dr. Moreau.  There he discovers a race of beast men who have been created by Moreau in the name of science.

Along with the beast men, Moreau has created a beast woman out of a panther.  The good doctor is curious to see if his latest creation can feel love like a real woman so he throws her and Edward together to see if sparks will fly.  Edward just wants to leave the island though and get back to his fiancee.

Laughton as Moreau is easily the best part of the movie.  He's creepy and crazy and he plays the part to perfection.  Arlen as Parker has matinee idol looks, but he's not a very good actor and he's no challenge to Laughton.  In fact, all of the "villains" of the movie are better and more interesting than the good guys.  Kathleen Burke as the panther woman gets to run around in an animal skin bikini and Moreau's assistant Montgomery has a murky past that makes him interesting.  Parker and his fiancee are boringly bland.

The makeup on the beast men is surprisingly simple yet effective.  The hairy man who lusts after the women looks like a cro-magnon man.  Although Bela Legosi's mask ends up looking like a bad wolfman.  Maybe they wanted to disguise his features so that people wouldn't wonder what Dracula was doing on the island, but it's one of the weakest pieces of makeup in the film.

There are a few exciting moments in the movie and it only runs about an hour so the pacing is quite brisk.  You can tell that the film makers were more interested in making a horror/thriller than making any kind of statement.  Still, the best reason to watch this movie is for Laughton's performance as the maniacal Dr. Moreau.

I'll admit that part of the reason I watched this movie is because of the poster, which features the Panther Woman so prominently along with the tagline, "The Panther Woman lured men on - only to destroy them, body and soul".  I was ready for some hot pre-code Panther Woman action, but the poster and the tagline are both highly exaggerated.  She does look hot and sexy for the time, but that's not an accurate description of her character.

As a quick little old time thriller, this movie has its merits, but a more clever writer could have made it just as entertaining but thrown in a message as well. 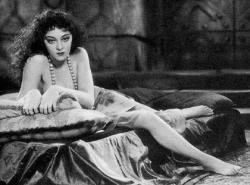 Kathleen Burke as Lota the Panther Woman in Island of Lost Souls.

H.G. Wells’ Dr. Moreau is the original mad scientist with a god complex living on a remote island and performing unspeakable biological experiments. I can remember as a kid seeing the remake in the 1970s. It gave me nightmares afterwards. Then in the 1990s Marlon Brando took on the role opposite Val Kilmer. Now having seen the original version I must say that in some ways, and despite the primitive special effects then available, they did it best way back in 1933.

As Scott wrote, Charles Laughton is great as the mad doctor. He remains outwardly cool but has a maniacal gleam in his eyes. He gets all worked up thinking about his panther woman and Parker getting together and tries to use her feminine wiles to lure Parker in.

Richard Arlen (again agreeing with Scott) was a strikingly handsome leading man but lacked personality. He is most famous for starring opposite Buddy Rogers as flyboys in the very first Best Picture Oscar winner Wings. He did fine work in that silent movie but here where he has to handle dialogue as well his performance falls flat.

What works best about Island of Lost Souls is that it isn’t trying to make any philosophical statement. Its intentions are totally to titillate and terrify. It asks no questions about the moral consequences of Moreau’s actions because, as the title suggests, it assumes that everyone in the audience will be on the same page in regards to the evil nature of said experiments.

With this flick Paramount Pictures was clearly trying to cut in on the horror movie genre done so successfully over at Universal. The use of Bela Lugosi was an obvious attempt to capitalize on his fame as Dracula although, as mentioned above, he is completely unrecognizable as the Sayer of the Law.

Island of Lost Souls builds quickly to its inevitable climax. The Dr. meets his gruesome fate, finally getting a taste of his “House of Pain”. As the island burns, the survivors row away and are cautioned against looking back. 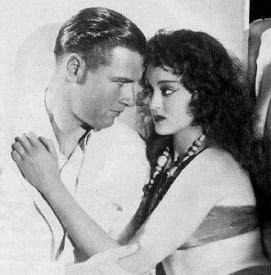 Richard Arlen and Kathleen Burke in Island of Lost Souls

Personally speaking, the best time to watch an old black and white film is late at night.  Perhaps it stems from when I was a child and there were movies shown on network television late at night.  I remember trying to stay up late to watch them with my dad.  Either way, an old film just seems suited for watching late at night.

Both of my brothers mentioned how Island of Lost Souls has no depth.  It certainly is ripe with possibilities of social commentary on science, religion or even sex.  The deepest it gets is when Dr. Moreau says, "Mr. Parker, do you know what it means to feel like God?"

Richard Arlen had one of the least auspicious means of getting into the movie business.  He was a motorcycle messenger when he crashed his bike into the gates of Paramount Pictures.  He broke a leg but the studio provided him with medical care.  A studio executive was impressed by his good looks and gave him a contract once his leg healed. He started as an extra in 1925.  He eventually became a leading man, but he soon was back to supporting roles and became a working actor, doing small roles for the rest of his life.

Kathleen Burke won her role as the Panther Woman through a photo contest.  Her career only lasted six years, playing mostly exotic roles. She is oddly sexy.  She rubs up against Arlen in one scene, just as a real cat does when they want to be petted.  The effort works as he suddenly kisses her.

Like Patrick, I found the ending fitting,  Dr. Moreau's fate is justifiably horrible.  With it's short length and dark tone, Island of Lost Souls is a great late night watch.