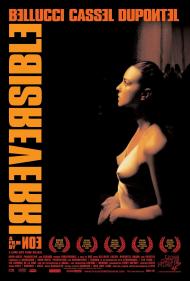 It eventually goes back to where we see three friends together, two men, Marcus and Pierre, and a woman, Alex.  She and Pierre used to be lovers, but have remained friends.  She and Marcus are now together.  The three are light heartedly discussing why Marcus can give Alex orgasms, while Pierre could not.

After leaving a party alone, that all three attend, Alex is brutally raped and beat.  It is one of the scenes where Noe leaves the camera stationary.  We witness the entire rape without a single edit.  Alex is taken to the hospital as she has been beaten unconscious.  Pierre and Marcus take it upon themselves to find the rapist and exact revenge.

In one of the first scenes in the movie Pierre and Marcus wander through Rectum looking for the rapist.  There is plenty of male nudity and gay sex going on in the background.  One guy is in stirrups and he begs Marcus to fist him.  At first I thought Noe directed this scene as such to avoid lingering on such decadence, but as the film progressed I think it had more to do with representing Pierre's and Marcus's state of mind.  At this point in the story neither is thinking clearly, and the camera movement demonstrates their lack of clear thought.

Near the end of the film and beginning of the story, Marcus and Alex lay naked in bed.  The scene is fairly long as they snuggle, talk and otherwise enjoy being alone and naked with each other.  The camera follows them around the apartment, never cutting to a new angle.  The affect is amazing as they seem very natural.  Both actors do nude scenes, although we see more full frontal of Cassell than we do Bellucci.

Bellucci is gorgeous as hell, and has the most amazing body, but she is also a good actress. I am not an actor.  I am not sure how you play a rape victim, but Belluci had to go somewhere dark inside herself for that scene.  As anyone who watches WWE knows, it is not the person doing the hitting that sells the act, but the one getting hit.   Belluci makes the rape scene look horribly real.

I normally hate it when a director is too "artsy" with his camera work, but not here. Noe's choice in direction clarifies what is going on. He films the two lovers in a single shot as that is a moment of clarity, as is the rape scene.  The scene in Rectum is filmed very jerky as the guys are stressed and worked up.

Irreversible is a unique film for mature audiences only.