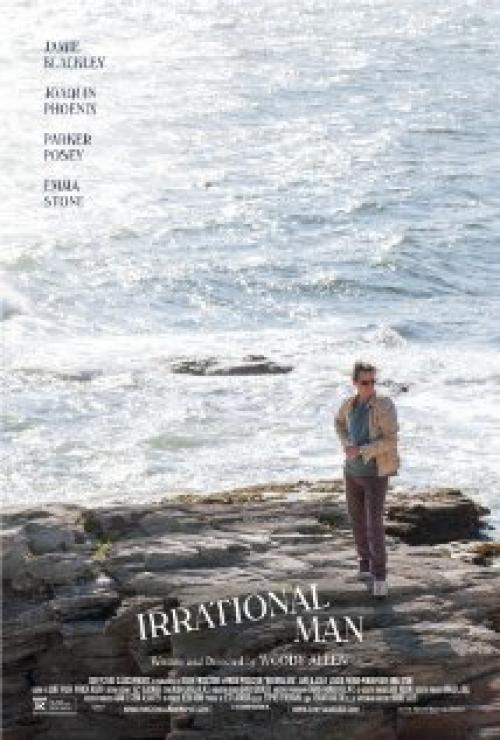 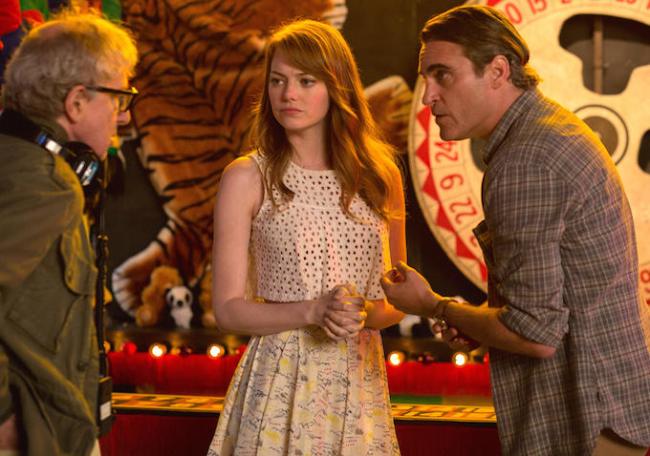 This year's annual Woody Allen offering finds him mining familiar territory. Add Irrational Man to the list that already includes Crimes and Misdemeanors (1989), Match Point (2005) and Cassandra's Dream (2007) (and probably others I'm forgetting) of his films where the protagonist commits murder. Borrowing the title from William Barrett's influential 1958 work Irrational Man: A Study In Existential Philosophy that first introduced existential thought to the English speaking world, Allen once again questions the meaning of existence.

Joaquin Phoenix (sporting a large pot belly) plays Abe Lucas, a philosophy professor newly arrived at a small New England college. Abe's reputation as a radical thinker, a womanizer, and an alcoholic all proceed him. Emma Stone (in her second film as Allen's current muse) plays his student Jill who -in true Allen fashion- is instantly smitten by the older man. This set-up allows Allen to quote the works of such existentialist thinkers as Kierkegaard, Heidegger and Sartre while having his characters engage in pseudo-intellectual conversations of the type for which he's famous.

Irrational Man isn't a comedy. It's a drama with murder. This being a Woody Allen movie, however, there is bound to be at least one laugh out loud line. At one point when Jill describes the professor to her parents she gushes, “He's conservative but in a liberal way.” It got a big laugh at the theater I saw this movie in. Something about Emma Stone's earnest delivery makes it funny.

Without giving too much away, the gist of the plot is that, as the story begins, Abe is in the middle of an existential crisis. What everyday people call being depressed or in a funk - but since he's an intellectual it's an existential crisis. The result is he's suffering from writer's block and impotence. At the new college Abe quickly begins two relationships. One is with a fellow professor (played by an underused Parker Posey) and the other is what starts off as a platonic professor/student friendship with Jill (Stone).

A chance encounter where he overhears a conversation at a diner provides Abe with an epiphany. He plans and carries out a murder that he thinks is morally justified. Suddenly he's got his mojo back. Now anyone who's ever seen a Woody Allen movie will know that things will quickly begin to unravel for Abe. As derivative of his earlier work as it is, there's still some joy to be had watching it all unfold. Allen manages to toss in a few nice little flourishes on the way to the finish line and the small but talented cast gives it the old college try.

Irrational Man is Woody Allen on autopilot but even so he's still more compelling than most movies currently filling theaters. 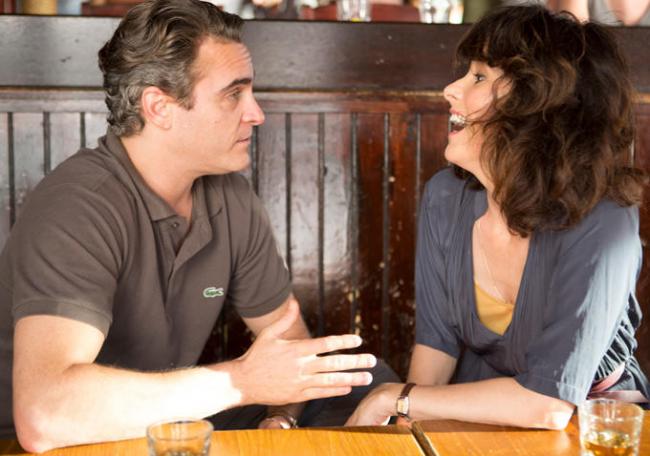 The highest compliment I can pay this movie is that at least it's not the worst one Woody has ever made. As Patrick said, despite feeling derivative of earlier, better work by the prolific filmmaker, there are a few redeeming features. The tone and mood are, despite the dark subject matter, kept light and breezy and the whole thing clocks in at just 90 minutes. It's more of a short story than a novel.

Even after all these years, or maybe because of all those years, Allen can still attract big name actors to his films. However, it has to be said that the cast does little to lift the film out of mediocrity. Phoenix is bland in the lead and I was constantly distracted by his pot belly which is featured prominently. Stone is as radiant as always, but her character is pretty flat. I agree with Patrick that Posey is underused. She manages to hint at greater depths than is written into the script with her world weary professor in an unhappy marriage character.

The real problem is the script. Allen's ear for dialogue has deserted him for much of it. Take the dinner scene where Abe and Jill discuss the murder with her parents. It's filled with stilted, exposition laced dialogue that sounds completely unnatural. And it's not the only scene that sounds so. The darker side of Abe's crime is glossed over and the situation is reduced to a philosophical debate that seems to have no connection with reality. It feels more like an excuse for Allen to list all of the philosophers he's read than an attempt to provoke any sort of new or original thought.

I've said this before, but I'll repeat it here. Allen refuses to stop working, churning out a movie a year as if he's afraid that if he stops he'll never get started again. Well, maybe taking some actual time and care over the script next time wouldn't be such a bad idea. Quality being more important than quantity seems to be an idea that Allen has never agreed with. Because of this constant need to churn out film after film it's always a crap shoot as to how good the next Allen film will be. Irrational Man falls somewhere in the middle of the Woody spectrum.