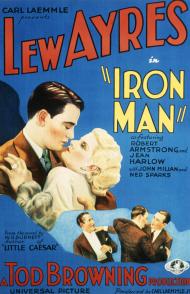 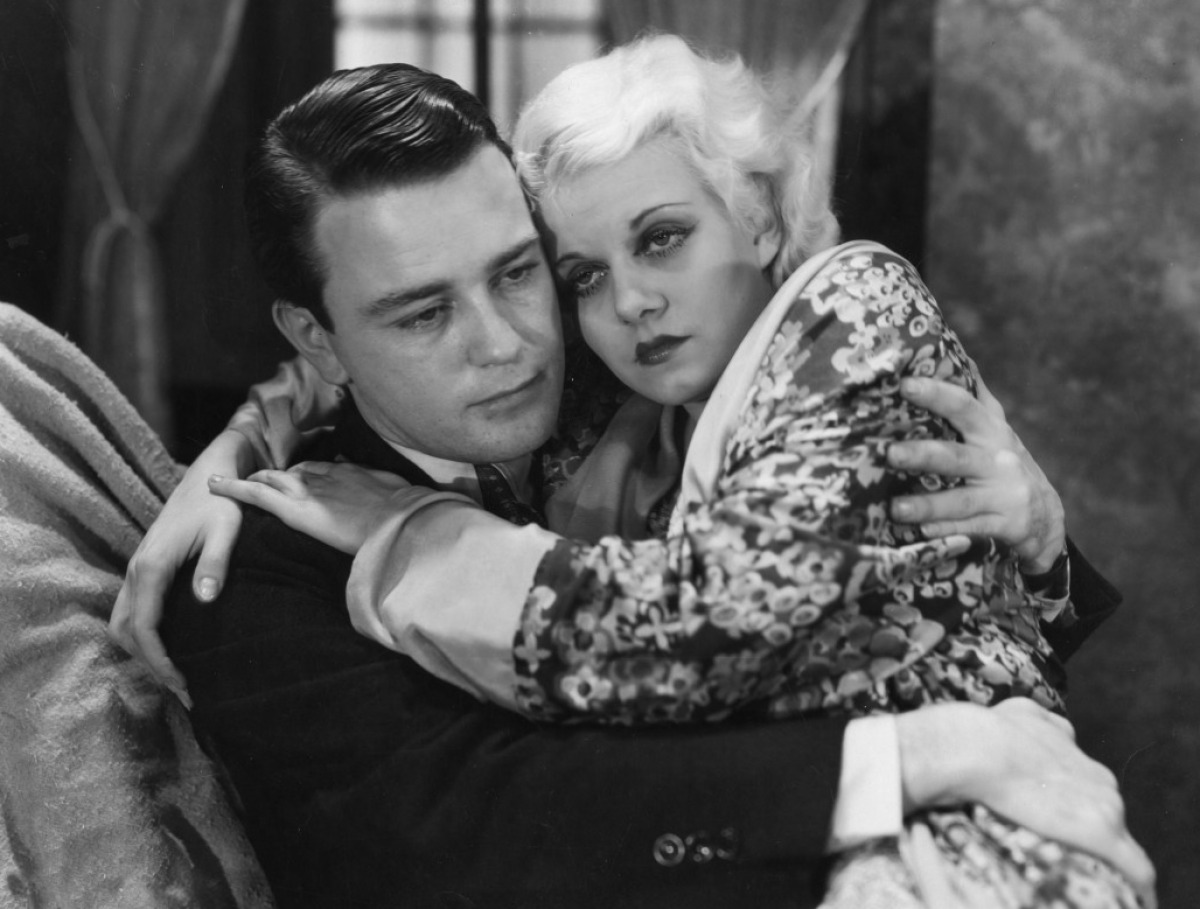 Iron Man is a boxing melodrama from the pre-code days of Hollywood. It stars Lew Ayres, Robert Armstrong, and Jean Harlow in an early supporting role. Although it has a few interesting moments, mostly from a historical perspective, its entertainment value is limited.

Ayres stars as Kid Mason, a boxer with talent, but not much in the brain department. When the story starts he loses a fight because he didn't listen to his manager George (Armstrong). His wife, the faithless Rose (Harlow), decides she doesn't like being married to a loser and so ditches him at the first opportunity. After she leaves, Mason's prospects improve. George trains him up for a shot at the championship. Once his star rises, Rose sees dollar signs and so worms her way back into the big palooka's life, but she brings her lover back with her. With her encouragement, the Kid gets a swelled head and it's up to George to bring him down a peg or two, but is it too late?

For a movie about boxing, little of it takes place in the ring. The few scenes that do take place there are filmed very poorly. Most of them are shot from a long way away. It's as if you're sitting in the back row of a very large auditorium with the boxers just tiny figures in the distance. Only during the final fight do we get closer to the action, but this isn't exactly Rocky or Raging Bull.

And for that matter, Ayres is no Stallone or De Niro. He's lean, with zero body fat, but he lacks the muscle or definition to be a convincing boxer. The fact that he spends so much of the movie without his shirt (and oddly, even conducts an interview with a few reporters while in the nude, although he's only shot from the waist up) makes his lack of muscle more obvious. His acting skills also aren't that strong. Ayres is best remembered as starring in All Quiet on the Western Front and in the Dr. Kildare movies, and for being a conscientious objector during World War II. He was Oscar nominated in 1948 for Johnny Belinda, but would never again achieve the level of stardom he enjoyed during the early 1930s, despite continuing to act in movies and on television right up until 1994.

Harlow, whose career was much shorter than Ayre's, is obviously much better remembered than her co-star. Her part is small and atypical. While she played the bad girl in many films, she was usually able to generate at least some sympathy for her character or make you admire her audacity. In this film she has zero redeeming qualities. Rose is a gold digging bitch looking to ride Mason all the way to the bank while cheating on him at every available opportunity. Her best moment comes when she pretends to be sick to woo Mason back to her. She's anything but subtle, but Mason is firmly wrapped around her finger.

It's the lesser known Robert Armstrong whose acting impresses the most. The prolific character actor was best known for starring in King Kong as the promoter who captures Kong, but his face should be familiar to film buffs. Imdb.com lists 182 acting credits for him ranging from silent films right through to the 1960s where he was still working, mostly on television. His gruff, but fair minded boxing manager is the most sympathetic character in this film as he sees right through Rose's shenanigans.

Like many films of the era, it runs just over an hour. So while it's far from great, at least it has the virtue of brevity. 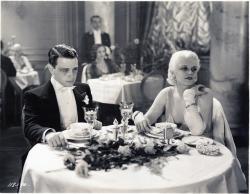 Lew Ayres was certainly not a great actor but he was easy on the eyes, especially as a young man. He looks good without a shirt on, as well as cleaned up in a tuxedo. I agree that it is Robert Armstrong who gives the better performance. He is the sympathetic heart of the story and the real hero of the piece. Harlow looks great as the unfaithful, gold digging Rose. She was at that early stage of her film career with the platinum hair and extremely heavy eye make-up. Of course today she's the only reason the film is remembered at all.

Tod Browning's career as a director dated all the way back to 1915. Although he worked in many different genres he is remembered mostly for directing horror films. He had worked with Lon Chaney on many of his silent classics, and had just directed the original version of Dracula right before making this picture. He would follow Iron Man with his second most famous film, Freaks. Although now considered a cult classic that movie nearly ended his career. Browning would direct his final movie (Miracles for Sale) in 1939.

Boxing movies were quite popular in the 1930s. Iron Man is not one of the better ones. As Scott wrote, the scenes in the ring are not only poorly shot but few and far between. It's as if they were afterthoughts rather than being set pieces instrumental to the plot. The real meat of the story is all the melodrama in Kid Mason's personal life. He is a cuckolded sap who believes every lie his wife tells him no matter how flimsy or transparent.

Harlow really knew how to wear evening gowns. She had a unique way of standing and moving about. Her posture made the most of her figure, especially in draped gowns with plunging necklines. I liked the scene my brother mentioned where she pretends to be sick. She sits in a chair with a white blanket around her that makes it look almost as if she has wings. Only she is about as far from an angel as you can get.

Lew Ayres spends quite a bit of time in various stages of undress. Clearly he was being sold as a male sex symbol. Unfortunately he lacked star quality (not to mention acting talent) and remained too innocuously boyish in manner to ever become a truly great leading man.

Although it's not a completely terrible film, Iron Man is for die hard Jean Harlow fans only.