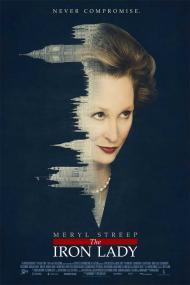 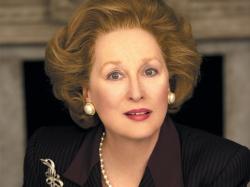 Was there ever a more obvious or perfect casting choice than Meryl Streep as Margaret Thatcher? Who else could play her? Not only is Streep a fantastic actress to an extraordinary degree, but she also bears a passing resemblance to the former Prime Minister. It's the kind of idea that just screams Academy Award and I can assure you that Streep lives up to all expectations.

If only the movie lived up to her performance. Rather than a straight out biography of Thatcher, this movie chooses to focus on Maggie in her declining days, racked with dementia and trying to overcome the loss of her beloved husband Denis.

In flashbacks we are shown the highlights of her political career, from grocer's daughter to the longest serving Prime Minister of the 20th century. They are however just that. Highlights. We are shown the moments you'd expect to see. Thatcher facing down the Unions. The IRA bombing of the Tory conference. The Falkland Islands War. The prosperity of the late 80s. And finally her fall from power.  These moments are skimmed over and offer no new or deep insights and that feels like such a wasted opportunity as well as a betrayal since the previews seem to promise precisely that kind of movie. I'm always curious when watching a biopic just how factual it will be, but there seems little reason to do any fact checking here as the details of her career are kept so vague and limited to the highlight reel.

A large portion of the movie is made up of an elderly Margaret well into retirement wandering her home and talking to the hallucination of her dead husband. It's a brilliant piece of acting by Streep and one that will most likely win her lots of awards, but instead of a celebration of Thatcher's career it gives the movie more of a feeling of mourning.

One of the most positive aspects of the movie is the relationship between Margaret and Denis. Although later in her career their relationship seemed to be a bit strained at times, they appeared to share a genuine love. The clownish Denis, who was a successful businessman in his own right, was the perfect foil for the much more serious minded Margaret. The scenes with the two of them are the most emotional in the film.

Along with Streep, Jim Broadbent does a nice job as Denis. And Alexandra Roach also does a very nice job as the young Margaret Thatcher. Her's is a small part and completely overshadowed by Streep, but her performance too is worthy of praise.

Maggie was a polarizing figure in British politics. She was (and still is by some) hated on the Left and yet she arguably changed Britain more than any other Prime Minister in history. Her social and economic policies altered the political landscape for the foreseeable future. Love her or hate her, she should be remembered as the Iron Lady who kicked in the doors of Parliament and turned her country from socialism to a modern day capitalist society for better or for worse. That's the movie I expected to see and that's how I'm sure she will want to be remembered. Not as a sad old lady, alone in her house, slowly forgetting her past.

Jim Broadbent and Meryl Streep in The Iron Lady.

I agree Scott. Other than providing the perfect acting exercise for Streep, I’m not sure why the story focuses so much on Thatcher’s waning years. What is the point of dwelling on the costly personal price she paid for being so dedicated to her career and country? It comes across as a bit disrespectful. There’s a reason, after all, why public figures stop appearing in public after a certain age or level of infirmity. The filmmakers' decision to turn the spotlight on this once great woman in her dotage strikes me as rude.

That said I agree Meryl Streep is brilliant in the role. She was certainly the obvious choice for the part and deserves the Oscar for it. She handles the scenes of a confident Prime Minister at the top of her game as well as she evokes the doddering old woman carrying on conversations with her dead husband. Here’s a humorous bit of trivia courtesy of the IMDB. A British spoof called The Strike poked fun at the idea that Hollywood would make a movie about Maggie Thatcher and cast Meryl Streep in the part. That was in 1988.

The movie does, for the most part, paint a fair portrait of this iconic woman. She is shown as absolutely confident in her staunchly conservative values. As she tells her husband at one point, she valued thoughts over feelings. Her brilliant instincts as a politician were matched only by her ambition. When then U.S. Secretary of State Alexander Haig suggested Britain not retaliate in the Falkland Islands because they were thousands of miles away, sparsely populated and of little social or economic importance, the quick-on-her-feet Thatcher snaps back, “Like Hawaii you mean? In December, 1941.”

Scott, although you’re right that the highlights of Thatcher’s political career are only skimmed over here, the director, Phyllida Lloyd, does play around with historical facts for dramatic effect a few times. For example, in 1979 the year Thatcher was sworn in as Prime Minister, there were 19 women serving in the House of Commons yet no women are included in the scene.  In an interview the director defended this decision by saying  that it's meant to represent Thatcher’s selective memory of the occasion. Another historical inaccuracy is the scene where Airey Neave is assassinated by an INLA car bomb in the parking garage at the Palace of Westminster. Margaret Thatcher was, in reality, nowhere near the building at the time.

The Iron Lady is really just an excuse for the superb Meryl Streep to tackle one of the juiciest roles in her long and distinguished career. She doesn’t disappoint even if the script does. 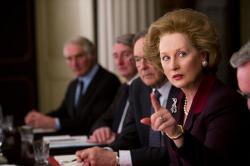 Meryl Streep as the Iron Lady.

Margaret Thatcher is one of the very few politicians or world leaders, whose quotes (or paraphrasing) I have committed to memory.  Some of my favorites are, "If you just set out to be liked, you would be prepared to compromise on anything at any time, and you would achieve nothing."  She is often given credit for saying, "The problem with socialism is that you eventually run out of other people's money."  Although the accurate quote is, "...and Socialist governments traditionally do make a financial mess. They [socialists] always run out of other people's money."

The Iron Lady has a scene that defines much of the feelings of conservatives.  While addressing her cabinet about a fair tax, she says, "You haven't had to fight hard for anything.  Its all been given to you, and you feel guilty about it.  Well may I say on behalf of those who have had to fight their way up and don't feel guilty about it.  We resent those slackers who take take take and contribute nothing to the community."  I could not verify that as a legitimate quote of Thatcher's, and is thus likely a creation of the screenwriter.

Scott wrote that she has dementia, but I am not sure if that is what the movie is going for.  Sure, she talks to her dead husband, but it is more as an inner monolog than a person seriously believing her husband is still alive.  The bits and pieces of her career are interesting, but the relationship between her and Denis is simply explained.  She is serious and driven while he has a sense of humor and patience.

I agree with Patrick that although it makes an effort to be fair, it does seem to go out of its way to show Thatcher as sad and miserable.   Either way, Streep does an astonishing job, whether she is old and talking to her husband's memory or middle aged and talking down to another politician.   Streep carries the film like Thatcher carried a country.