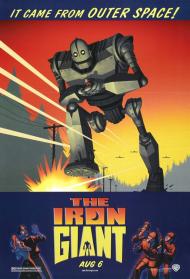 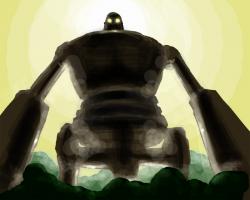 The Iron Giant is the greatest, under-appreciated, animated film ever made. It has no songs and dances or goofy sidekicks. Its animation is not the best in the business, yet its story and emotional message makes this an absolute winner.

Hogarth is a your usual outsider child. He has been put up a grade in school. His single parent mom has to work for a living and thus has limited time for him. One night he saves a huge alien robot who got caught in some electrical power lines. They bond and become friends.

The Iron Giant was damaged when he crashed to Earth, so he does not recall his original reason for coming here. A paranoid government agent soon shows up to investigate the sightings of the huge robot. With the help of a beatnik artist, Dean, who sort of likes Hogarth's mom, Hogarth is able to hide the Iron Giant.

While hiding out with Dean in his scrapyard, Hogarth shows the Iron Giant some of his comic books. One is a Superman comic and the other is about an evil robot named Atomo. The Iron Giant grabs some metal and fashions a circle with an "S" in the middle. He then places it on his chest and says, "No Atomo, I Superman." Hogarth then pretends to shoot the Iron Giant with a toy lazer gun that lights up. Something in the Giant's programming goes into effect and he shoots a real lazer back at Hogarth. Dean manages to tackle Hogarth in time to save him.

The Iron Giant then "feels" bad and walks away. The US Army soon shows up and they attack the Giant. He does not fight back. Hogarth goes to his friends aid. Together they fly away from the army with Hogarth in the Giant's hand. They are, however, shot down by fighter planes. After they crash, the Giant thinks Hogarth is dead. He then goes into full-on attack mode. Guns pop out of all parts of him and he starts blasting the army.

The hysterical government agent then orders a nuclear weapon launched at the Giant. The idiot forgot that when it hits, it will kill him and the entire town. Hogarth comes-to and races to confront the berserker Giant. The Giant aims a massive weapon at Hogarth who tells him. "You are what you choose to be."

The Giant then retracts his weapons as he overrides his aggressive programming. Hogarth then explains to him that they are all about to die when this nuclear warhead comes down. The Giant then flies up to meet the bomb. As he nears it, he recalls Hogarth telling him he can choose to be what he wants to be. The Giant says; "Superman" and then collides into the warhead.

That moment always gets to me. I know it is just a cartoon, but the message is so damn strong. A hero is someone who voluntarily puts themselves into a dangerous position in order to help someone else. In this post 9/11 world, the definition of a hero needs to be understood. This movie defines it perfectly. We choose. We are responsible for our actions.

The Iron Giant is an animated movie for adults and children. It has THE best message I have ever seen in a cartoon movie.