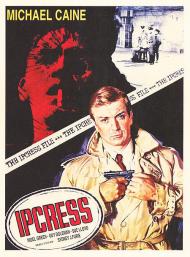 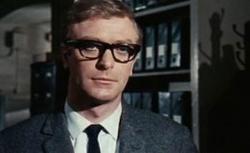 The Ipcress File was released in 1965, at the height of the 1960s Bond mania. Rather than imitate or spoof the Bond franchise, it was made intentionally as an anti-Bond film. Where 007 flew the globe battling megalomaniacs and bedding exotic beauties, Harry Palmer remains firmly in London where he spends as much time filling out paperwork as he does tracking down bad guys. It's a decidedly low-key approach and it doesn't always work, but even at its worst, it remains interesting and is a bit of a time capsule.

Michael Caine stars as Harry Palmer, an ex-military man whose army career was cut short by a bit of dabbling in the black market. Instead of going to jail, he was offered the chance to put his talents to work in a clandestine department of the government. The kidnapping of a British scientist leads Palmer to a new assignment where he is part of the team tasked with finding the missing man.The mystery leads Palmer to an abandoned warehouse where he finds a bit of audio tape labeled "Ipcress" that plays seemingly random noises. As the movie builds to its conclusion Palmer must contend with the CIA and the fact that one of the people in his group may be a double agent, but will he find out who before it's too late?

While the mystery isn't all that entertaining and certain aspects of it don't make complete sense, your attention is held because of two things. The character of Harry Palmer as played by Michael Caine and the interesting, obtrusive manner in which it's filmed.

Caine is terrific as Palmer. With his cockney accent and shabby apartment, Palmer isn't quite the jet setter that Bond is, but like Bond he seems to do alright with the ladies. He's an accomplished cook and enjoys classical music. He's a bit cocky, but always likable. Unlike Bond, there's nothing superhuman about Palmer. He even wears glasses (that would inspire Mike Myers when he played Austin Powers years later), which leads to two memorable scenes. One when he takes them off before a fight (something it would be difficult to imagine Bond doing) and later when a woman asks him if he always wears them, he replies, "Except in bed", causing her to reach up and take them off him. As I said, he does alright with the ladies.

The direction and filming style is interesting, but obtrusive. The camera angles are set up so that very often they are through a window, over someone's shoulder, from the ceiling or tilted. It makes for some interesting and memorable setup's, but also are quite jarring and serve to constantly take you out of the experience.

I mentioned that this movie was intentionally made as an anti-Bond. What's really interesting about that is that quite a few people who worked on the Bond franchise, also worked on this movie. It was produced by Harry Saltzman, who was one-half of the Bond producing partnership. The music is by John Barry who scored 11 of the Bonds. And the production design was by Ken Adams, who made a name for himself doing the design for Bond. While the look,  feel and pacing is quite different, I do have to say that the music bears a passing resemblance to Bond. A recurring musical refrain sounds very similar to the Goldfinger theme.

The most disappointing aspect of the film for me was the ending. While the first two-thirds of the movie are based very strongly in reality, the climax involves some very 1960s psychedelic brainwashing, which was apparently a hot topic at the time. It seems out of place though. I was expecting something much more down to earth to keep the feel in line with the rest of the movie. More annoying is that why the brainwashing is being done to one character rather than just killing him, is never explained.

For those looking for pure entertainment, you'd be better off watching a Sean Connery Bond film. If you're looking for something a bit different and a glimpse of London in 1965, then you might find some things to enjoy here. If nothing else, you get to see another cracking performance by a young Michael Caine.

As Scott suggests, the tone of the movie shifts dramatically during the final third. It begins in a similar neighborhood to The Spy Who Came in from the Cold but finishes somewhere just north of James Bond territory.  Harry Palmer isn't as impeccably attired or as flashy in his heroics as 007 but he isn't nearly as realistically portrayed as Alec Leamas either. And though I concur that Michael Caine is a fine actor, he isn't really suited to be an action hero. His fight scenes seem awkward and he looks funny running.

As movie entertainment The Ipcress File is only mildly successful. The pacing at the beginning is pretty slow, although the director does include a few humorous snippets. It's ironic that they set out to make an anti-Bond movie when the most entertaining section of the movie is the ending that emulates Bond. As Scott mentioned they even use an elaborate but superfluous method to get rid of Palmer by brainwashing him instead of just shooting him. A similar plot device was used in nearly every single Bond film.

The unusual camera setups that Scott wrote about are more of a curiosity than a distraction. Although in 1965 they probably bothered audiences more than they would today after years of jumpy, hand-held camera work and overtly sophisticated shots that are designed to make the director seem clever but actually distract from telling the story. The many exterior shots of London in the 1960s do provide a fascinating glimpse into the past.

File this one under Aficionados of Vintage British Spy Films or Serious Michael Caine Fans. For anyone else there isn't much to enjoy about The Ipcress File. 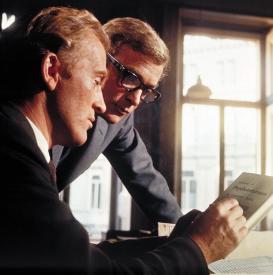 Gordon Jackson and Michael Caine in The Ipcress File

My brothers commented on the direction and I will chime in. I hated the horribly over dramatic direction. Like Scott, I found the direction to be completely obtrusive. The first action scene is pathetic as we see Caine get into a fight not only from a distance, but from inside a phone booth. A phone booth in which no one is in. I guess I should not be surprised since Sidney J. Furie also directed Superman IV: The Quest for Peace (1987), possibly the worst superhero film ever made.

Somehow this film still earned itself a Directors Guild of America award nomination for Outstanding Directorial Achievement in Motion Pictures. I guess this annoying style was quite innovative in 1965. It has not however, stood the test of time.

Another point my brothers made was that this was an anti-Bond film. Instead of Ms Moneypenny, we have an old cigarette chain smoking pepperpot. Instead of exotic locales, we have a dreary and often rainy, London.

The American secret agents are depicted as blatantly obvious. The first one wears white tape on his glasses, making him always easy to spot. The second one is African American. As he is the only person of color in the film, he cannot blend in even if he tried. The fact that both end up dead proves my point.

The entire brainwashing plot is ridiculous and poorly executed. I was never completely invested in any of the proceedings. I wished I had watched a James Bond film instead, even a Roger Moore one would have been better than this.