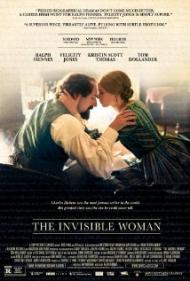 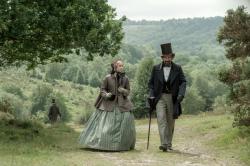 Felicity Jones and Ralph Fiennes in The Invisible Woman.

The Invisible Woman tells the true story of Charles Dickens' mistress, the unremarkable actress Ellen Lawless Ternan (called Nelly). It was based on Claire Tomalin's book of the same name. It begins in 1883, 13 years after the author's death, and several years after Nelly's marriage to the much younger George Wharton Robinson. I was going to criticize the movie for failing to age her character for these scenes (she turned 44 in 1883) but apparently Nelly Ternan maintained her youthful looks well into middle-age. She was 12 years older than her husband, to whom she lied about her true age. Although 37 at the time of her wedding, she successfully convinced her husband-to-be that she was just 23.

The story then flashes back some 25 years to when the 18-year-old Nelly first met the celebrated writer of so many famous novels. Dickens was 45 and married with a large brood of children. He was also the most famous novelist in England. He is portrayed as a man who relished the spotlight, living life with gusto and a childlike enthusiasm.

We see their initial attraction and how their affair began. A birthday present intended for Nelly was mistakenly delivered to Dickens' long suffering wife Catherine, who subsequently took it upon herself to see that the gift made it to its intended recipient. Talk about an awkward situation, although it is handled in a very polite and restrained British manner. The movie also includes the Staplehurst rail crash that killed 10 passengers in June, 1865. Both Dickens and Ternan were aboard the train on their way back to London from France.

The acting is top notch and the movie is beautiful to look at. Its Oscar nomination for Best Costume Design is well earned. In fact several scenes seem set-up just to show off Michael O'Connor's richly detailed period clothes, both male and female. One scene in particular takes place at a horse race and begins with the camera in tight on the main characters before it pulls back slowly to reveal the entire crowd of spectators. There are also several long shots of Nelly (in1883) walking briskly along the beach.

The story is told in a sincere low key manner. The only real problem with the direction by Ralph Fiennes (who pulls double duty as Charles Dickens) is the languid pace at which the story unfolds. The framing device structure adds little to the story except to its running time. I suppose it is meant to show how Nelly Ternan finally came to terms with her past and was able to live out a full life but the point could have been made in less time.

The Invisible Woman is a well-acted historical drama, rich in period detail but deliberately paced and lugubrious in mood. Its point seems to be to make this socially invisible woman, whom the story hints had quite a large influence on several of Dickens' novels and on whom he based several characters (most famously Estella in Great Expectations), visible to history. I've no doubt the movie is intended to celebrate this woman's life, but I'm not so sure that Nelly Ternan herself would approve. 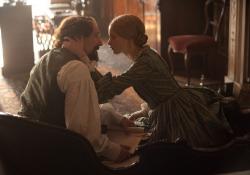 Ralph Fiennes and Felicity Jones in The Invisible Woman.

Twice in this film a character remarks that they walk at quite a pace. If only this film did the same. As Patrick wrote, one of its biggest problems is its slow, deliberate pace. Like my brother, I could have done without so much of the framing device where we see Nelly as an older, married woman. Showing her at the beginning and end would have been quite enough, without constantly returning to that later stage of her life throughout the story.

I likewise second my brother's opinion that the Oscar nomination for costume design was well earned. As he wrote, there are several scenes that seem to purposefully highlight the detailed, ornate dresses and suits of Victorian England. I'm not someone who particularly notices such things, but it's impossible to deny that they are very well done and deserves to take home the statue.

Felicity Jones does excellent work in the lead role. She plays repressed yearning with great talent as well as tragic love. Because of her acting ability we are able to empathize with her more than perhaps she deserves. After all, here is a woman (a young girl really) who begins an affair with a married man, mainly because she is in awe of his fame and talent, in an age when such things were extremely frowned upon, who must then deal with the consequences she brought upon herself.

Fiennes also does good work as Dickens, playing him as one of the world's earliest recognizable celebrities. However, the script never quite gets below his surface. I never really believed he was madly in love with Nelly, more that he was just looking for a younger, more beautiful woman to have an affair with. Even more importantly, he is looking for someone who is starstruck and appreciative of his work in a way his wife obviously hasn't been for years.

As a director, Fiennes is less successful. He frames the occasional pretty picture, but that's about all. The film's aforementioned pacing problems and its inability to get beneath the stiff-upper lip English veneer, are issues that he is unable to overcome.

Perhaps Dickens' scholars will appreciate this film, but for your average moviegoer, it's too long and too slow. Despite the costumes and a couple of nice performances, it left me cold.