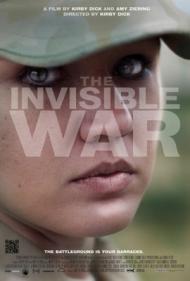 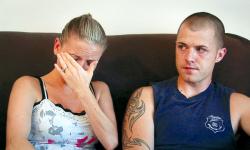 Kirby and Amy Ziering interview many women and a man, who were raped while serving in the United States military. It focuses on a few in particular who share their harrowing ordeal as well as the frustration that came when trying to get justice. The statistics this film "estimates" is staggering.

One girl Dick features here, told of being stationed on an isolated base in Alaska. She was raped more than once and some of the assailants were the military police. What recourse did she have? She spoke of crying to her father over the phone but not daring to tell him what was happening as she was told all calls were monitored.

The Invisible War goes to great length to imply many things about how the military is a cesspool of sexual harassment. It also creates many excuses as to why the crimes go unpunished. The usual excuse given is that the perpetrator is the victims' superior, or the commander of the base is protecting the rapist as they are buddies. That may often be the case, but I think this film missed a point.

Anyone who has ever achieved some higher rank or worked in management knows how responsibility, as well as authority, works. I only throw this out as food for thought, but I believe many reports of sexual assault get brushed aside by company commanders because they are concerned with their own position. The fear a company commander may have is that he makes a call to upper brass about a rape on his base and the response comes back, "Can't you run your base?" "What kind of a leader are you to let that happen?"

Company Commanders are career military men who want promotions and transfers to preferred duty stations. If they have black marks on their record such as rapes happening under their watch, they may worry it will affect how their superiors will rate them. Thus, a problem with rape going unreported in the military is the set up of the chain of command itself.

I am not trying in the least to excuse any Commander from not investigating or reporting a rape. I am condemning the upper ranks and a Government that has no clue how to deal with it. At one point it was determined that rape is an occupational hazard in the military!?! An effort to make an educational film about rape in the military is laughable. It shows a would be rape victim as the cause of the rape because she did not walk at night with a buddy.

The best aspect about this film is that it caused some conversations and brought to the public a problem that needs addressing. 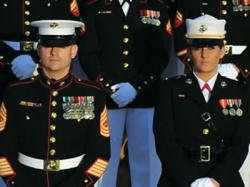 The Invisible War does throw a lot of estimated statistics at you, but it also gives a tremendous amount of facts as well and the facts alone are bad enough. The estimates are, as Eric said, staggering. In 2009, for instance, Department of Defense records show that 3,230 women and men reported being sexually assaulted, but the DoD estimates that 80% of sexual assaults go unreported so the actual number is estimated at 16,150 service members sexually assaulted on an annual basis. Neither number is good.

Eric, I do agree with your point that Commanders might want to keep reports of trouble quiet so as not to reflect poorly on their command. That's just another reason why the power to adjudicate should be taken away from the commanders. Whatever the reason, these commanders, most of whom have no legal training, and have a personal stake in the matter, take on the role of judge, jury and executioner. Many of the women interviewed for this film, speak of being informed by their commander of the damage the woman's career could suffer if they report a rape.

Even in civilian life, rape is often treated as the victim's fault. "She was asking for it." "Look at what she was wearing." "She's sexually promiscuous." It's the one crime where the accuser is guilty of lying until proven innocent. In the military, those attitudes are exaggerated even further. Eric mentioned the laughable education films that emphasize female recruits shouldn't go anywhere alone, making it their responsibility not to get raped. When a female officer, who endured the "gauntlet" during the infamous Tailhook Scandal of 1991, reported the event to her commander, she was told, "That's what you get for walking down a hallway filled with drunken aviators."

Agreeing with Eric again, the best thing this movie can do is bring the issue to light and cause conversations to make the invisible, visible and possibly lead to real change, some of which is already happening. A final caption at the end of the film reveals that the decision to prosecute has already been taken away from unit commanders. 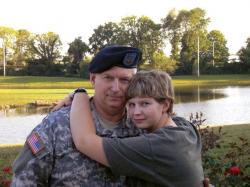 Proud Americans in The Invisible War.

The harrowing incidents of brutal rapes discussed in this movie are very disturbing to say the least. But unlike in the civilian world, where a woman has legal recourse, the repercussions from reporting sexual assaults in the military are often nearly as bad as the rapes themselves. The woman is made to feel either worthless or to blame and the harassment often continues. The perpetrator is rarely brought to justice. As one woman says, your only options are silence, suicide or desertion.

One study cited in the film shows that the percentage of men who enlist in the armed services that have previously committed rape is twice as high as the percentage of men in the general population who have committed rape. This makes sense if you think about it. Just as pedophiles are attracted to jobs where they come into close proximity with children, the absolute power superior officers have over their subordinates most surely attracts sexual predators to the military. These women are sitting ducks, so to speak.

Eric, you make a good point but you are mistaken when you say the movie missed it. In one scene a man discusses the various reasons commanding officers do not often report rape charges to their superiors. He specifically mentions their reluctance being caused by the fact that it will create a blemish on their record and is perceived as a reflection of their poor leadership capabilities.

The Invisible War doesn't just blame the men in the military, it also points a finger at those women that stand complaisantly by and say nothing against the “Old Boy's Club” mentality that is clearly still prevalent in today's military. Dr. Kaye Whitley, Former Director, Sexual Assault Prevention and Response Office, seems particularly clueless about the stated goals of the department she ran. Everything she mentions to the interviewer has to do with the behavior of the victims. At one point he asks her if it wouldn't be helpful to consider the role the behavior of the perpetrators plays in these cases. She responds with a vacant look and some vague platitudes about her area of expertise.

The makers of this documentary have done this country a great service. A broken military cannot run efficaciously. The Invisible War shines a spotlight on our military's dirty little secret. Our armed forces have an internal problem with sex assaults that, thanks to brave people like the women and men that stood up for justice and weren't afraid to be interviewed for this movie, is just now finally being addressed.