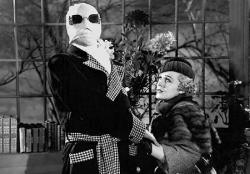 The Invisible Man is, along with Frankenstein and Dracula, one of the classic horror movies made by Universal Pictures in the early 1930s. It was directed by James Whale and launched the celebrated movie career of its star Claude Rains. Rains was cast for the “intellectual” qualities of his voice and his clear enunciation. He is only actually seen for a moment in the film's final shot.

Based on the classic H.G. Wells novel, first published in 1897, it features a script that adheres closer to its source material than either Frankenstein or Dracula had. Wells was still living at the time and he was reportedly disappointed in the portrayal of his central character. In the movie he is written as more of a psychopathic madman than in the novel.

The story jumps right into the action and never lets up in its 70 minute run time. It begins with the arrival of a mysterious stranger at a country inn in England. He's wearing an overcoat, a hat, gloves and dark goggles, and his entire face is covered in bandages. He demands a room and that he be left completely alone.

The shocking revelation that this is an invisible man comes quickly as he shows himself (or rather lack of self) to the inn keeper's wife before escaping to wreak havoc on the surrounding countryside. The rest of the story concerns the police's efforts to find him, with a subplot involving two fellow scientists and the daughter of one of them that was romantically linked to Dr. Jack Griffin (the invisible man).

The special effects hold up remarkably well. They include the Invisible Man riding a bicycle in one scene and him lighting and smoking a cigarette in another. They are simple but effective and cleverly executed. The Invisible Man is also shown in various stages of dress. Sometimes he appears as a disembodied shirt riding in a car or as a pair of pants dancing down the road. His gleefully wicked laugh punctuating the night.

The Invisible Man has a higher body count than most horror movies of that time. He commits several murders on camera and it is mentioned that he has killed a total of 20 men in the search party looking for him. Later he causes the derailment of a passenger train that inflicts death on another 100 innocent people.

The one aspect of the movie that seems dated is in the frightened manner in which his victims react. Whenever he chokes someone they just lie there helpless from terror without even trying to pull his hands off of their necks. If you can look past this fact then the movie is a gripping and fast-paced horror classic. Keep in mind the concept of an invisible person was far more fantastic, and therefore scarier, in 1933 than it is today.

In addition to Rains, the cast includes several famous actors. Henry Travers is best known for his role as the angel Clarence in the perennial holiday classic It's a Wonderful Life. Here she's young and beautiful, but Gloria Stuart found her greatest fame late in life as the older Rose in Titanic. Character actress Una O'Connor steals a few scenes as the inn keeper's wife and her performance was reportedly H.G. Wells's favorite in the movie. Walter Brennan and John Carradine each appear briefly, as the man whose bicycle is stolen and a Cockney villager, respectively.

The potent combination of the visual effects and Claude Rains masterful vocal performance are what make this a great movie. Rains delivers his lines with a chilling inflection. It will give you the creeps when he says, “An invisible man can rule the world. Nobody will see him come, nobody will see him go. He can hear every secret. He can rob, and rape, and kill!”

The Invisible Man deserves all the accolades it has received over the decades. It belongs in the pantheon of indelible movie masterpieces. 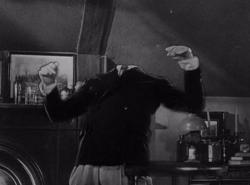 The Invisible Man was the very first film to feature full frontal nudity.  Okay, okay he is invisible, but the character is naked for extended periods of time.  Just before taking off his pants he says, "This will give them a bit of a shock."

Patrick mentioned that The Invisible Man has the highest body count of all the classic Universal horror films.  That is worth noting, but that is not enough to make this a better film than the other horror classics.  The killings are so random that they mean little.

Dr. Griffin is merely a mad killer, and thus the least interesting of all the classic Universal monsters.  Frankenstein was a victim of circumstance.  Dr. Griffin kills for fun.  Dracula fed to survive.  Dr. Griffin abandon his love while, the Mummy was motivated by his.  The Wolfman was the victim of a bite while Dr. Griffin took his own poison.  I never liked or felt the slightest pity for Dr Griffin.

The one supporting character that stands out the most, and not in a good way, is the extremely annoying inn keeper's wife.  She barges in on Dr. Griffin without knocking.  Her voice is grating.  Worst of all is her insistent screaming.  She seems to scream as much as she speaks.

As Patrick mentioned, the pacing is great, the tension is always there and the special effects still work.  However, with no one on screen to connect to, I never developed any attachment to the proceedings.   The Invisible Man is worth a viewing but it is no surprise that it failed to create the legacy of so many other Universal monster movies. 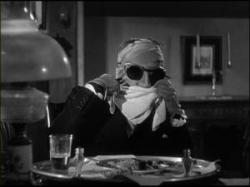 Claude Rains is The Invisible Man.

I have to agree with Eric. The lack of a clear motivation really hurts the dramatic tension. They should have provided Dr. Griffin with better reasons for his experiments. They hint at his love for Flora being his main motivation, but they should have played up that angle more. Her father is rich, they could have  made it plain that he was developing his formula as a means of getting the money to support her. If we'd cared about him before he went mad then the ending would have been more tragic.

Also, as Eric said, we don't have a strong protagonist to root for. There are a few candidates, but none of them are strong enough to truly fill the part. Kemp is a wuss. Flora's father could have been a Van Helsing type, but after  a strong start he becomes basically a non-entity. The strongest possibility is the Chief of Police in charge of tracking down the Invisible Man, but he isn't given quite enough personality. Or, if they really wanted to be ahead of their time, they could have made Flora the protagonist who would do anything to save the man she loves.

Without that motivation and a protagonist, all we are left with is the spectacle. The special effects are very well done. Today's film buffs are very familiar with green screens and green suits which can place actors in any location or remove body parts. In 1933 however, this was virgin territory. Claude Rains wore a black velvet body suit instead of a green one, but the idea was the same then as it still is, only much more low tech, but just as effective. This technique allows objects to move, cigarettes to be smoked and various other tricks, all in a very believable manner. It's easily the best aspect of the film.

I do agree with you Patrick that Claude Rains does excellent vocal work. His distinctive voice is memorably perfect. It's dramatic, sinister and threatening all at the same time. It's easy to think that anyone could have played his part, but that would be like saying anyone could have voiced Darth Vader as well as James Earl Jones. Sometimes the voice can be the most important aspect of a character.

This is an entertaining movie and even a memorable one, but without a stronger story, I wouldn't refer to it as a masterpiece. It's a classic 1930s horror film, but it's not perfect. 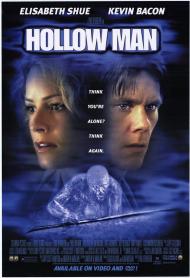