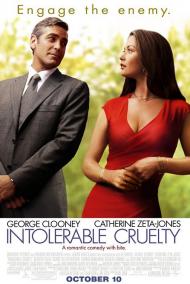 With stars like George Clooney, Catherine Zeta-Jones, Billy-Bob Thornton, and Geoffrey Rush, a movie would have to be pretty damn bad not to be entertaining. Intolerable Cruelty is entertaining, but while it features some truly funny moments and a knockout comedic performance from George Clooney, the romance is lukewarm and at times Catherine Zeta-Jones looks almost bored. It quite nicely proves the point that a great cast cannot cover up all of a movie's weaknesses.

Clooney plays Miles Massey, a high-powered and very successful divorce attorney who's run out of challenges and is growing bored with his job. A lawyer of the Billy Flynn variety, Miles is all about appearances and money. His constant obsession with keeping his teeth pearly white is a running joke. Clooney shines in the role and most of the movie's laughs come from his performance. The only downside to his character is the way he suddenly becomes so trustingly naïve halfway through the movie, but which is a fault of the script and not Clooney's performance.

A challenge finally comes Miles' way when Rex Rexroth (Edward Herrmann) comes to him for representation. Rex's wife (Zeta-Jones) is seeking a divorce because of Rex's philandering, which she has on videotape. The challenge is that Rex, due to business reasons, wants his wife to get absolutely nothing in the settlement. Miles happily accepts the case.

The pacing is quick and as long as the jokes keep coming, the movie sails along nicely. However, the one or two moments when this movie dips into sentimentality, like Miles' keynote speech at the N.O.M.A.N. Conference (National Organization of Matrimonial Attorneys, Nationwide, whose motto is 'Let NOMAN put asunder...'), tend to drag the movie down.

Perhaps the blame for this movie not quite reaching the perfection its premise and cast deserve, falls on the Coen brothers, who directed, produced, and wrote the movie. More known for off beat films like Fargo, Raising Arizona, and The Hudsucker Proxy, this movie bears little of their off kilter sensibilities. Probably the only scenes that carry their signature are those when Miles meets with his law firm's senior partner, a man so ancient that only the 20 to 30 machines feeding and removing various fluids from his body, can keep him alive. It's the movie's only surreal moment.

As an admitted attempt to imitate the screwball romantic comedies of the 1930s, Intolerable Cruelty works with some success as a comedy. As a romance, however, it falls far short of its goal. 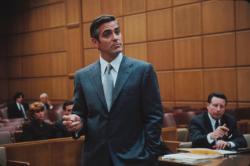 Yes, Intolerable Cruelty is greatly inspired by those screwball comedies of the 1940s. Its opening shot is reminiscent of the Tracy/Hepburn classic, Adam's Rib, in which Judy Holiday catches and shoots her philandering husband. Intolerable Cruelty opens with Geoffrey Rush brandishing a gun as he discovers his wife and the pool man. "Do we even have a pool?" He asks his wife, who attempts to cover the affair by saying he was only there to sell pool cleaner. Although this movie has some genuinely clever moments, they are not plentiful enough to sustain this otherwise unengaging film.

A new set of morals has been established in this country because of Bill Clinton. He showed us that just because some one has affairs on their spouse and demonstrates by that action that they are a selfish, uncaring, liar, doesn't mean you shouldn't like him. Intolerable Cruelty has Zeta Jones as a whore. Okay, she marries for money, but the principle is the same. Clooney plays a lawyer who will lie and destroy anyone just to win. Thanks to Clinton and his liberal supported media, we have learned that we are not supposed to judge people by their actions.

Just another reason why I am not a liberal. The fact that two such self centered, uncaring lowlifes end up happy is a sad comment on modern society. Have our morals been so screwed up that we can no longer see the good guy from the bad? Miles and Marilyn are bad people. Where is their comeuppance?

The best thing in this film is proof positive that Clooney has long been wasting his career. His performance in One Fine Day put me to sleep. Ocean's Eleven is really a dull movie, as is his performance. However, with the Coen brothers, Clooney is an excellent comic actor. As his work in Brother Where Art Thou proves. Clooney can do comedy very well. Forget the drama George. Do more romantic comedies. You could be the Clark Gable of your time. 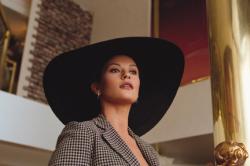 First of all this isn't a romantic comedy, it's a screwball comedy. The romance is secondary to the laughs.

Eric mentioned the Tracy/Hepburn films of the 40's but this movie is really more like those ultra-silly screwball comedies of the 30's like My Man Godfrey, Nothing Sacred, or Libeled Lady. Case in point: during one court scene whenever the attorney yells objection the judge overrules until at one point the other attorney is literally choking the witness. When the defense attorney yells objection again the judge replies, “I'm going to allow it."

I completely disagree with Scott that apart from the obvious sexual chemistry there really isn't a reason the two leads fall in love. Hello. They are two peas in a pod. In Marylin Rexroth, Miles Massey has finally met his match.

I'm not even going to comment on Eric's holier-than-thou attitude about the characters' moral fiber. Except to say that he needs to lighten-up, this is a silly movie and nothing more.

I agree that Clooney is good but Zeta-Jones is better than my brothers give her credit for. And I thoroughly enjoyed all the crazy twists and turns in the plot. Well done! Intolerable Cruelty is the closest in spirit and style to those old screwball comedies of yesteryear that I have seen since What's Up Doc? and I predict that this movie will grow in stature over time.