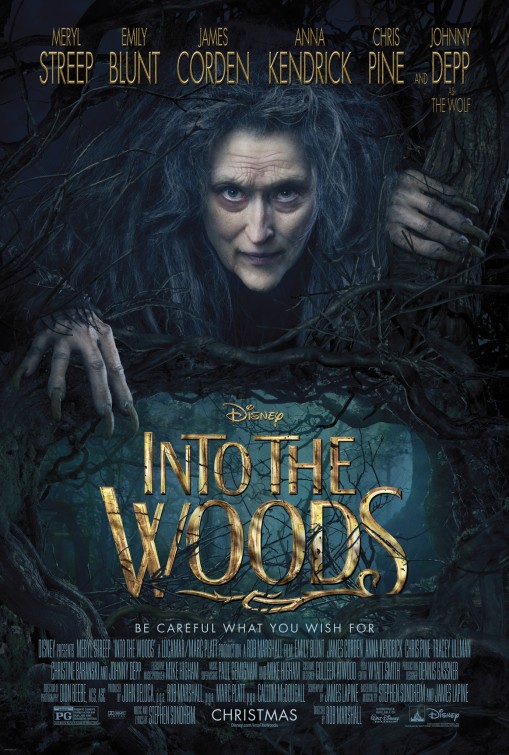 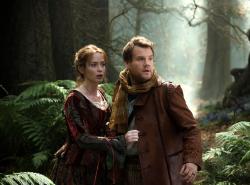 Emily Blunt and James Corden in Into the Woods.

On the surface Into the Woods seems like an ideal Disney vehicle. After all it takes 4 well known fairy tales and intertwines them together. However, this is a darker story than your typical Disney tale, harkening back to the original Grimm source material. This movie version, produced by Walt Disney, retains some of that darkness, but reduces it, most notably the sexual elements of the original stage version. That, coupled with a cast made up of stars known more for their names than their singing ability, produces a neutered musical that manages to entertain without producing any real "Wow!" moments.

The plot centers on a childless baker (James Corden) and his wife (Emily Blunt). To undo a curse put upon them by the witch (Streep) who lives next door, they must venture into the woods and collect 4 items. These 4 items lead them into contact with Little Red Riding Hood, Cinderella, Rapunzel, and Jack of the beanstalk fame. There are princes, step-mothers, magic beans, giants and other of the usual fairy tale trappings. And while this plot seems rather childish, there are dark elements and a couple of deaths. The woods of the title serve as a metaphor and there are themes revolving around growing up, parents, children, and what happens when your wishes come true.

Directed by Rob Marshall (the Oscar nominated director of Chicago) from the Tony Award winning musical by Stephen Sondheim, the film certainly has potential. Unfortunately, it never fully realizes that potential.

Once again Hollywood has made casting recognizable faces a priority over casting singers in a musical. Something it has been doing for decades. This renders most of the songs in the film fairly weak. Streep's witch gets some of the best songs in the original musical, but Streep (as I thought she forever proved in Mamma Mia) is no singer no matter how much treatment the sound department can do for her. Kendrick, of the main cast, has the strongest voice. Corden as the Baker seems to be speaking his songs at times. Blunt, who is by no means a great singer, still manages to acquit herself well as the Baker's wife and generates the most emotion.

Perhaps most surprising is how the film fails to open up the sets to any great degree. Despite being on film, the woods setting remains rather claustrophobic apart from a few scenes. Disney hasn't exactly gone hog wild with the special effects. Even the giant is kept half hidden among the trees with its CGI seams showing.

In a nod to its potential younger audience, the film has also removed most of the sexual content. Red Riding Hood and Jack have both been made younger for the film and the sexual innuendos between Red and the wolf have been removed. This removes the underlying meaning of Red's songs. And it goes without saying that the wolf suit worn on stage, complete with prosthetic penis, is nowhere to be seen. A later sexual tryst between two other characters is also played down and left more to the viewer's imagination. Other changes include the removal of the narrator and the mysterious stranger along with several songs, including one of my personal favorites, "No More", which is sung by the Baker and his father.

I'm curious as to how this movie will fare at the box office. It's too dark, with a downer of an ending, to appeal to the Frozen crowd. And yet that's exactly the audience most likely to be intrigued by the marketing. Even if it appeals to the hardcore Broadway audience it seems unlikely to find mainstream success. 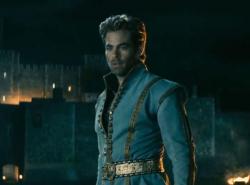 Chris Pine as Prince Charming in Into the Woods

I agree with Scott that the cast is unimpressive. I hope the casting of Meryl Streep came only after the producers became bored with begging Barbra Streisand, Bette Midler or Diana Ross to play the witch. Streisand already proved on The Broadway Album that she can make "Children Will Listen" a better song than it deserves to be. Midler could have added much to the campy humor. Ross already wears big dresses and has even bigger hair. She would have been a natural and added some color. This is usually Patrick’s complaint but the only time we see a person with dark skin is in passing or in the background.

As Scott wrote, the woods are symbolic of life. We all must, at some point; venture into the woods not knowing what exactly may happen to us. The first two acts are all fairy tale. The movie could have easily ended with the scene of Cinderella and Prince Charming riding in their carriage passed the baker and his wife. However, Into the Woods has a moral to teach. Apparently life is not a fairy tale and we do not all end up with the life we dream of.

The last act is as slow as a tired snail and as exciting as a scoreless Soccer match. These already fractured fairy tales take a turn for the worse as reality sets in. Some people die while others are unfaithful. Oh but wait, there is still a somewhat happy ending. The message being that just because your life does not turn out as you hope does not mean it will not turn out well.

Scott really hit the productions problem on the head when he wrote that there is no, "Wow!" moments. Les Miserable has “I Dreamed a Dream.” Dream Girls has “And I am Telling You.” West Side Story has “Somewhere.” Funny Girl has “Don’t Rain on My Parade.” I could go on and on. None of the songs from Into the Woods have stayed with me.

If I had to choose a favorite moment it would be Chris Pine singing in agony about how hard it is to be a prince in love. I kept thinking how I will never take him seriously again as Captain Kirk. He was bred to be charming, not sincere.

Lilla Crawford and Johnny Depp in an uncomfortable moment from Into the Woods.

Into the Woods may not have a truly memorable score but it does manage to entertain. Especially during the first act where the story is fast-paced and well written. It's quite amusing watching the Baker and the Baker's Wife cross paths with these iconic fairytale characters in their desperate search for the four items required to break the Witch's spell. The cast may not include any great singers but for the most part they manage to sell Sondheim's songs on the strength of their acting abilities and a helping hand from Auto-Tune. I agree with Eric that it would have been interesting to see what Barbra Streisand could have done with the role of the Witch but in all honesty it really isn't that great of a part.

I didn't hate the second act nearly as much as Eric did, but it is definitely the weaker half of the show, and I agree that it moves at a snail's pace. This darker, more adult section of the musical was changed the most from stage to screen. The scene Scott alluded to between the Baker's Wife and Cinderella's Prince Charming being one example. Their interaction is left much more ambiguous here than in the original Broadway production. The destiny of several characters was changed in the transition from stage to screen. Jack's Mother's fate was toned down (and was oddly edited) as was Rapunzel's.

Johnny Depp as the Wolf is completely wasted. His is the one number that should have been cut entirely. Even with the toned down sexuality of the scene it still seems out of place given the child-friendly tone of the rest of the movie. And by changing the age of the actress playing Little Red Riding Hood (whom I found to be very annoying) to a younger girl it actually makes the Wolf's lascivious leering seem more like pedophilia.

The look of the movie is hit and miss. Some of the scenes are breathtakingly beautiful but I agree with Scott about the not very good CGI during the scenes with the Giant (Frances de la Tour is becoming typecast – if you recall she played the giantess Madame Maxime in Harry Potter and the Goblet of Fire back in 2005). I too enjoyed “Agony” the most of all the musical numbers. It is the funniest song in the score and perfectly delivered by the two princes. Chris Pine even does a very brief William Shatner impression at one point.

Into the Woods isn't a classic movie musical but it's far from a terrible one.