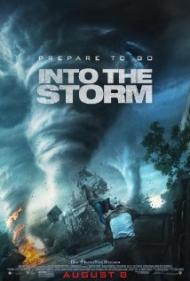 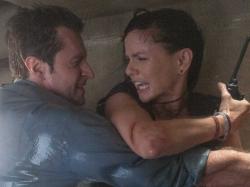 Richard Armitage and Sarah Wayne Callies go Into the Storm.

The 1970s were the high point of the disaster genre. Everything from airplanes to skyscrapers to cruise liners and just about every other location imaginable were stuffed full of recognizable actors. The first half of the film would build up the backstory of these characters and the second half would proceed to kill off most of them. Not all of these movies were classics and some were quite bad while others became increasingly campy. Still, on the whole they had a certain charm that means many of them are still enjoyable to this day despite their quaint special effects. Unlike those films, Into the Storm, a modern day disaster film with almost no recognizable actors and which features cutting edge computer generated special effects, will be lucky if it's watched by anyone this summer, let alone in 40 years time.

Annoyingly, this is a found-footage film, meaning that everything you see in the film appears to be shot by a camera in the film, be it a handheld video camera or CCTV footage or in a running attempt at humor, the cell phone camera and helmet mounted camera of two rednecks making videos to post on YouTube. As with most films of this type, the reasons for constant filming are flimsy at best. The story centers around two brothers at a high school who are members of the video club and who are supposed to be filming video diaries of the students. Another part of the story centers around a team of storm chasers. While it's logical that they would film the storm, they also, for some reason, like to keep their cameras on during the quiet moments between storms, including filming private phone conversations. As always, it's a pointless filmmaking style and they'd be better off just shooting it as a normal narrative.

The film's big names are Richard Armitage, who you might recognize as Thorin Oakenshield from The Hobbit films, and Sarah Anne Wayne Callies from The Walking Dead. He plays Gary, a small town assistant principal at the local high school and father to the two teenage video geeks. She plays Allison, a single mom meteorologist on the storm chasing team. Her team hasn't had much luck lately so they're excited when two large storms converge on Silverton, the town where Gary lives. Gary, meanwhile, is trying to cope with graduation and raising two sons on his own, one of whom blows off his graduation filming duties to romance a hot chick in an abandoned old factory which she wants to shoot a film about. That's about as much back story as you need.

Of course, it's the storms that are the real star of the film. This is hardcore weather porn. There are multiple tornadoes, tornadoes on fire, buildings, cars and even airplanes being tossed around on the wind and eventually one massive mother of a twister that's big enough to lift several thousand different Dorothy Gales to several thousand different lands of Oz. The effects are impressive, particularly seeing the airplanes lifted and tossed around, but they carry no emotional weight. Despite several different characters dying, the audience is never moved. They're generic characters who never feel real and they aren't helped by cliched situations and poor dialogue.

One of the best things about the movie is that it only runs about an hour and 20 minutes. Sure that's about an hour too long, but compared to the butt numbing running time of most of today's special effects riddled movies, that's quite brief. Although even that modest amount of time is probably longer than the memory of this movie will stay with you.

Into the Storm is under an hour and a half and as such, it never over stays its welcome. The first twenty minutes establishes two groups of characters, throws them together and then into danger for the rest of the movie. I cared about most of these characters as much, or more, than I did for any of the ones from those 70s disaster films.

I have two sons so, of course, I felt a connection with Gary. He is a bit distant from his kids since losing his wife. He is the vice principal at the same school his sons attend. He treats them more like employees than offspring. They, in turn, have issues with him. The oldest blames him for his mom leaving while the youngest simply feels left out. They felt real enough to me. What this family needs is a series of life threatening storms so they may learn to appreciate each other.

Where I agree completely with Scott is with the handheld video camera way of telling the story. Scott mentioned the many different ways it attempts to have cameras in the right place at the right time and how flimsy the excuses become to have them around. In fact, that camera technique is even abandoned later in the movie, making the whole idea moot. It is a completely pointless filmmaking style and should never be used again. EVER!

Although there are no “A” list actors in this film I recognized many faces. Besides the two Scott mentioned, I was surprised how Nathan Kress has filled out. What! You have never heard of Nathan Kress? Then you must not have a teenager in your house that watched Nickelodeon. Kress was a regular on the popular "I Carly" television show. Jeremy Sumpter was great in Peter Pan (2003) and had a role in the indie baseball film, Calvin Marshall (2011). Scott Lawrence was once a regular on my onetime favorite show, "JAG". He has since gained notoriety for his resemblance to Barack Obama.

Michigan successfully stood in for Oklahoma and the special effects are truly amazing. The tension builds as the storms increase. Not everyone lives but only one death held any emotional weight and it was not much to speak of. For the characters that survive, their fate is not entirely resolved and some hints at romances are never followed up on. Several scenes of actual tornado damage were used. It adds a small level of realism but if I want to see destruction, I will watch the news whenever it features Detroit.

Sure, this is not a great film but it is entertaining enough.

Into the Storm has impressive special effects. The scenes of destruction and mayhem are excitingly staged and well filmed. The pace is great and there's even some humor thrown in for good measure. The characters are indistinct but they fill the necessary role since they are all accessories in support of the star, which is the CGI department. This isn't the type of movie that you make an emotional investment in but it does offer a fairly entertaining thrill ride – provided you check your brain at the door.

Most of the acting is adequate with some of it bordering on amateurish. But then again the dialogue is all pretty stilted. I lost track of the number of times one character asks another, “Are you alright?” The movie works best when its cast is holding on for dear life while all hell breaks loose around them. The quieter scenes work less well but at least there aren't all that many of them.

SPOILER ALERT: Eric mentioned that several deaths occur. And that's true. And they are all easy to guess since Into the Storm features many tropes of the disaster/horror genres. There is one black guy on the storm chasing team so you know he'll die. Also the fanatical leader of the storm team has to go out in as dramatic a fashion as possible.

I'm with my brothers on the found-footage technique. Lose it already. Memo to Hollywood filmmakers: audiences know that movies aren't real. One unintentionally funny scene also happens to be one of the movie's CGI showpieces. Silverton, Oklahoma is shown to be a sleepy little town in the heartland but when the F5 tornado strikes it suddenly becomes home to a major international airport with dozens of jumbo jets being blown through the sky. It makes for a memorable visual sequence but from a story perspective makes little sense.