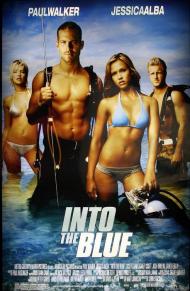 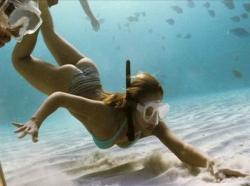 Jessica Alba in Into the Blue.

Into the Blue is a good opportunity to see Jessica Alba and her nice round ass. It is featured through out the movie, from bikini's to tight jeans. Often the camera is angled so that her rear is in the shot just for the sake of being in the shot. At least the director fully understood that he was directing a bomb and that he had best put the film's best asset on display as often as possible.

Alba plays Sam, who lives in the Bahamas with her beach bum boyfriend, Jared. They are joined by Jared's partying friend Bryce and his latest lay Amanda. Together they accidentally come across a sunken pirate ship that they believe is filled with gold. Near the site they also discover a recently crashed plane filled with cocaine. The drug lords soon get involved. They get attacked by sharks. They argue amongst themselves and some people get killed. I was completely bored.

How can I care about these characters when they act stupid and do things that are impossible in real life. For example: Jared is forced onto a drug lords boat at gun point. Something sinister has obviously gone on as no one is around. The two men, who brought Jared, go below to investigate. When they don't come back what do you think he does? No, he does not get back onto the speed boat, that brought him, and get the hell out of there, he goes below to see what happened to the bad guys who brought him to see the bad guys boss.

In another scene Jared jumps over board without any air tank. By just holding his breath he swims down a good 30 feet, then swims along the bottom of the ocean for a while, then over a reef, then sees a plane, swims over to it, then goes inside it, then discovers that it is full of cocaine by opening one of the packages, then finally swims back out of the plane and up 30 feet to the surface so he can finally breath again. He is not a beach bum he is Aquaman.

While in a bar, Bryce starts a fight with the cocain dealer/owner of the establishment because he offered his latest lay some cocaine. He could have just walked away but he decides to piss off a drug dealer by punching him. Did I mention that Bryce is a lawyer. Two scenes earlier Bryce was telling Jared he was going to cut Amanda's cut out of the money from the treasure for no apparent reason. Then all of a sudden he is defending her?

Into the Blue is just a bunch of tan, in good shape, young people running around in beach wear for a hour and 45 minutes. There is some action and suspense but who cares when the idiots invited all the danger themselves. Jessica's ass looks nice but I truly hoped for more.