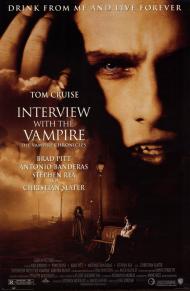 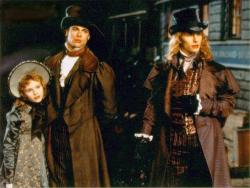 Kirsten Dunst, Brad Pitt and Tom Cruise in Interview with a Vampire.

Anne Rice is the mother of the modern vampire.  Twilight, True Blood, Vampire Diaries and every other variety of 21st century bloodsucker owes an enormous debt to her.  It was she who transformed the image of vampires from Eastern European Counts with strong accents and a bat fetish, into the modern young, glamorous and angst ridden undead super-heroes that we've come to know today.  Although several attempts have been made to adapt Rice's work to the screen, so far Interview with a Vampire, directed by Neil Jordan, written by Rice herself and featuring an all-star cast, is the only  one to be successful.

The title stems from the idea that Louis (Pitt), a vampire, tells the story of his life in modern day San Francisco via an interview.  This allows Louis to narrate the story from a modern perspective and provide commentary on it as it goes along.

In 1791, Louis, distraught over the death of his wife and child, becomes suicidal, only instead of finding death, he finds undeath in the arms of the vampire Lestat (Cruise). Becoming immortal does little to improve Louis' mood as he finds it comes with the price of having to commit murder every night to stay alive.  Lestat, on the other hand, lives for the kill and loves everything there is to love about being a vampire.

At the time of its release, the casting of Cruise as Lestat was the biggest news about the movie.  Rice famously disapproved and then changed her mind (whether sincerely or simply to help sell movie tickets is anybody's guess) about the casting choice and legions of the book's fans were in an uproar over it.  He actually does a decent job in the part.  There's really only one thing wrong with this movie version of Lestat and that's the god awful wig Cruise is forced to wear.  I know that they wanted to make him blonde as he is in the books, but that was really the best they could come up with?

In an effort to keep Louis happy, Lestat creates a vampire child for him.  Claudia (a young Kirsten Dunst), is exactly what Louis needs to draw himself out of himself.  He and Lestat become her "parents".  While young, Claudia and Lestat become close as they hunt together, but as Claudia ages, but her body remains that of a child, she begins to resent him.  Her relationship with Louis matures and they become something like lovers, which leads them down a path that separates them from Lestat and sends them to Europe where they hope to discover something of the truth about vampires.

While Pitt and Cruise are both serviceable in their parts, it is Dunst who truly delivers the best performance in the film.  She has a maturity in the part that truly belies her young age and you have no problem believing that she really is a grown woman in the body of a child.  She is the most sympathetic character.  Louis mopes too much and Lestat is fun, but he only has himself to blame for what happens to him.  Claudia, while a killer, is the true victim of the three.  "Yet you could do it to me. Snatch me from my mother's hand, like two monsters in a fairy tale. And now you weep!" she tells Louis.

Much of the credit for this movie must go to director Neil Jordan.  It is beautiful to look at and dripping with atmosphere.  Rice's script, while filled with some great lines, is also highly dramatic and the mood of the film goes hand in hand with it.  Surely he must have had a hand in pulling such a grown-up performance out of Dunst as well.

It's far too late to reassemble the cast from this movie for a sequel now, but if they could bring Neil Jordan back on board as director, I would be the first in line to see it.  With vampires at such a peak of popularity right now, I can't believe no one has thought of reviving the books as either another movie or even a television series.

There is nothing gay about this.

Before the Twilight books, Anne Rice's Interview with a Vampire was the vampire book series of choice.  She was the dark queen of Goth fans.  It lacks the romance of Twilight, but her vampires could wipe the floor with anyone in Twilight.

Scott complimented Jordan's direction, and he does maintain a dark dreary tone consistently, but he   romanticizes the time period.  The hot as hell Negro servant, concerned for her master's eating habits is laughable.  The "in the know" slaves who practice voodoo.  It all takes place in a very fictionalized world but is presented as truth.

The direction and story work but not the two main characters.  Lestat is insane and ultimately heartless.  He created Louis as a companion, and for some reason stuck with him even though Louis provides him with nothing but grief.  Louis despises Lestat but is ultimately a wimp.  He never stops Lestat from killing, he just piss-n-moans about it.  Neither is a likable character.

Only Claudia makes any sense.  You understand her motives and issues.  She is smarter than them both.   She outwits Lestat and does much of the thinking for Louis.  The corpse in her bed is a disgustingly revealing moment. 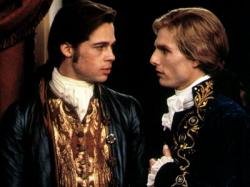 Brad Pitt and Tom Cruise, as Louis and Lestat, gaze deeply into each other's eyes in Interview with a Vampire.

Interview with a Vampire is an epic tale that covers several centuries and crosses several continents. Yes Anne Rice created the modern vampire. At the time of this movie’s release I was one of the fans complaining about the casting of Tom Cruise as Lestat. I have now changed my mind. He is actually quite good in the part. I also had a problem with how they aged Armand as played by Antonio Banderas. In the books he has the appearance of a youth of about sixteen.

For all the uproar over Tom Cruise’s casting, it is actually Brad Pitt as Louis, a vampire with a conscious, that carries the movie. He does a decent job, down to the voice-over narration. “Her blood coursed through my veins sweeter than life itself. And as it did, Lestat's words made sense to me. I knew peace only when I killed and when I heard her heart in that terrible rhythm, I knew again what peace could be.”

I disagree with my brothers on one point each. Scott, I don’t think the movie ever implies a lover-like relationship between Louis and Claudia. It is much more parent/child. And I disagree with Eric about the lack of romance. It is there between Lestat and Louis and then later between Armand and Louis.

It seems Brad Pitt is just as desirable and sexy playing the undead as he is as a human. Every male vampire he meets seems to have romantic feelings for him. Notice all the caressing of hair and faces going on and the lover’s quarrels between Louis and Lestat, as well as the tender lover’s dialogue between them. Here’s a typical shared exchange: Lestat, “No one could resist me, not even you, Louis.” Louis, “I tried.” Lestat (with a seductive smile), “And the more you tried, the more I wanted you.”

An eleven year old Kirsten Dunst is brilliant as the child vampire Claudia. I like the way she says, “I want some more.” after her first taste of blood. In her innocence the line is much more chilling. As a child that gets older but never grows up she is the most tragic character in this gothic story. Christian Slater (whatever happened to his career?) replaced River Phoenix as the interviewer after Phoenix’s untimely death. The movie was dedicated to his memory.

Often I watch a movie that I haven’t seen in many years and it fails to live up to my memory. Interview with a Vampire is that rare exception. I enjoyed it more now than in 1994. It is a beautifully shot and memorably acted vampire epic.