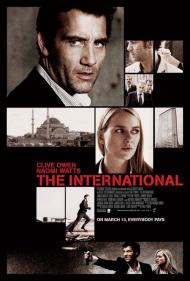 International is a well put together thriller that failed to connect with me. It has high production values, beautiful locations and some good action scenes. Yet at the same time I never felt personally connected or drawn into the story and so was ultimately disappointed.

Clive Owen stars as Interpol Agent, Louis Salinger. With the help of Manhattan Assistant District Attorney, Eleanor Whitman (Watts), he's investigating IBBC, an international and very powerful Bank. Apparently IBBC has been dabbling in arms dealing and aren't above a political assassination to seal a deal. Salinger tracks their dealings across Europe (Germany, France, Italy and Turkey are just some of the countries visited) and in New York City.

The problem I had with the movie is that while Salinger is driven to bring this bank down I never empathized with him or his mission. The heads of the bank aren't given much personality and their evil deeds are mostly done off-screen, except for the assassination, but the man they assassinate is another arms dealer. I also never quite bought into Salinger's obsession. It seems over done. They should have shown the bank being more evil if they wanted me to care strongly about bringing them to justice.

At two hours it also runs a bit long. There's too much talking without enough happening at times. This isn't a complicated movie, but all the talking makes it seem so at times.

The movie is definitely better during the action scenes. There's a large gun battle in the Guggenheim Art Museum that is well done, but a bit over the top. It's filmed well and is quite tense, but it takes way too long for the police to show up. In this day and age of mobile phones, the police would have been notified in seconds and video of the gun fight would probably have been posted on YouTube before the fight was even over.

Owen does a decent job and shows again that he has the potential to make a great James Bond. Watts is mostly wasted. Her part is so small that nearly anyone could have played her character. Although actually, her part is hardly needed at all. She could just as easily been excised from the entire movie. That's not a slam on Watts. I think she's a terrific actress, but here her part just isn't really needed. And why is the Assistant District Attorney of New York flying to and helping to investigate in Europe, anyway?

With the beautiful scenery and exotic locales there's plenty to look at, there's just not a lot to see.

Clive Owen; the man who should have played Bond.

With all of that out there, this movie decided to talk of Arms Dealers in mostly foreign countries. As Scott wrote, there is no connection to the characters or their motives. The gun fight in the Guggenheim was the best scene. The round room and ramp make a perfect shooting gallery. This movie is not shy about killing people, and the scene is definitely the most tense.

I will also mimic Scott in that this movies once again shows that Owen should currently be playing James Bond and not Daniel Craig. Owen can play the many key ingredients that make up Bond. He is tough without looking like he crawled out of a back alley bar fight. He appears intelligent and worldly, whereas Craig plays Bond like a street thug hanging with the swells.

The movies real problem though, is that it all feels like it takes place in some far off land that does not touch any of us, and as such why should we care? If they had made a film where foreign money was illegally filtered through some banks to fund an inexperienced, yet charming young Presidential candidate who, after winning the election, paid the money back disguised as economic bailout, it may have found a larger audience. I am just saying.