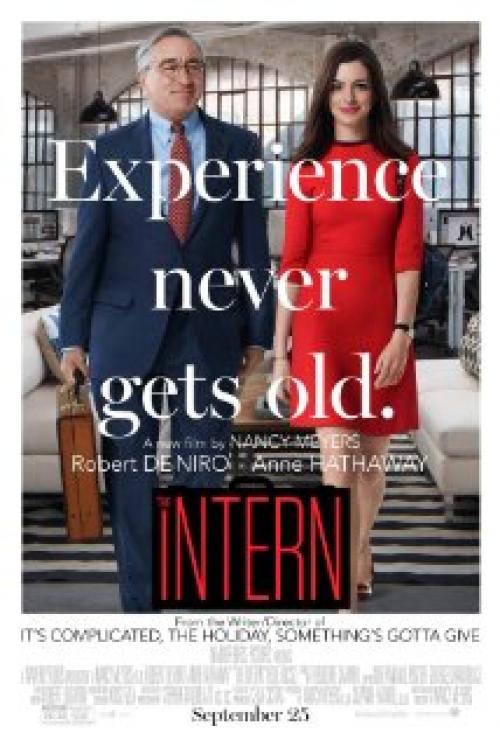 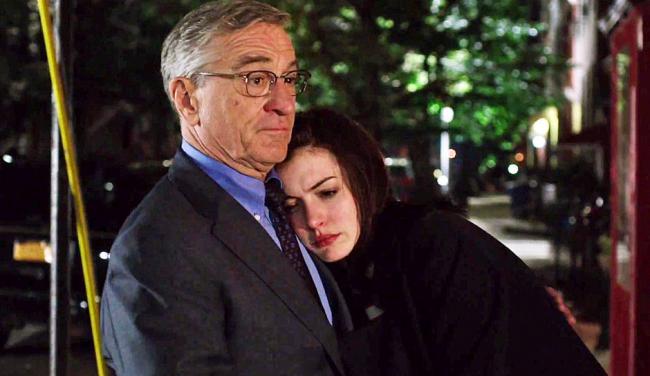 Robert De Niro and Anne Hathaway in The Intern

There has often been a stereotype about old people that is perpetuated by grandchildren. Kids like to think of the elderly as kind, gentle, understanding and always eagerly available to listen to their problems. It is sweet to think that old men just want to watch their grandchildren play little league or take them fishing while grandma is busy in the kitchen whipping up some delicious baked goods. Couldn’t we all use a grandparent at some point in our adult lives as well?

Anne Hathaway plays Jules, a married mother who spends more hours at her business, which she started, than at home. She is strapped by decisions, stress and responsibilities. Into her life comes Ben, played by Robert De Niro, a seventy year old retired widower. He is hired as her intern but over time becomes her chauffeur, which allows him to meet her husband and daughter and become personally involved with them all.

Ben also becomes friendly with several much younger co-workers, giving them advice and acting like, in his own words, “Everyone’s uncle.” Jules calls Ben “old school”, referring to his consistent wearing of a suit to work and having a readily available handkerchief when the water works begin. When one of his co-workers asks why he always has one in his coat pocket, Ben explains that they are for giving to ladies when they need one and represent one of the last vestiges of chivalry.

Ben not only dresses classy and professional he acts as he grooms. He avoids gossip and knows when to keep his opinions to himself. He is a bit uncomfortable, at first, when he and Jules’ professional relationship spills into her personal life. She likewise dislikes Ben getting to know her on such an intimate level at the beginning but their friendship and level of trust soon builds to a level of necessity, especially for her.

Jules is the modern woman. On the surface, she wants and has it all. Slowly we see that her life is far from perfect and she is in need of a grandfather’s shoulder to cry on and give her some inspiration. Jules is written as a well enough rounded character, even if she and her situation is clichéd. Ben, on the other hand, is little more than the stereotype I discussed in the first paragraph. We get bits and pieces of his past but he never becomes real. He never reveals a single flaw. When Jules and Ben have a private conversation about trouble in her marriage, Ben could have pointed out issues he and his wife once had but he does not. He never criticizes anyone or looks down at someone else in any way, even when they deserve it. Ben is like Clarence, the angel sent to help out a frustrated George Bailey in It’s a Wonderful Life (1946). Ben is that nice and that one dimensional.

I watched this at a matinee with a mostly gray haired audience and they laughed more than I. I enjoyed the humor of several scenes but this is not an overall hilarious film. Most of the jokes rely on an old person or a young person not fully understanding what the other is doing. The heart of the film comes from the generation gap being shrunk. Ben has to have someone help him set up his Facebook account while one young guy at the office admires Ben’s attaché case, and eventually buys one for himself.

The Intern tries to say something about how the older and younger people among us can learn from each other. I like the sentiment but their truly is very little originality presented. The best this movie has going for it is Robert De Niro in one of his most likable roles. Ben is how we all like to think of old men, even if we know it is not 100% realistic.