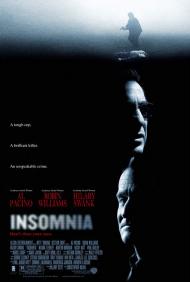 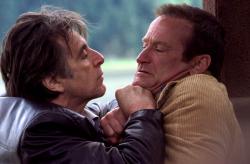 From start to finish Insomnia is a winner. Christopher Nolan pulls off a great job of directing, knowing when to give away key information and when to hold back and let the audience discover things for itself. Al Pacino and Robin Williams bring their considerable talent to what is an inspired cinematic achievement. Insomnia is modern day film noir with an intriguing storyline and interesting characters in a remarkable setting. Hilary Swank holds her own, sandwiched between the two movie legends, in a role which, fair or not, will be compared to Jodi Foster's Clarice from Silence of the Lambs. These three main players are all finely-nuanced actors with formidable screen presence.

Pacino is a respected LA cop sent to a remote area of Alaska to help investigate a murder. The plot thickens when we discover that his partner is about to make a deal and let Pacino take the fall for some past infraction. Then in a botched attempt at nabbing the killer, Pacino mistakenly shoots his partner; the catch being that the sole witness to this act is the killer himself. From here the story keeps moving, taking us along on a ride that we are not sure how is going to end.

The heart of the story is Al Pacino as Detective Will Dormer. He gives one of his realest performances in many years as a world weary cop who suffers from insomnia. And yes there are a few moments of classic Pacino ranting but in many ways it is very restrained. His inability to sleep is exacerbated by the fact that the sun never sets in this far northern climate, and as the film progresses he slips farther and farther into nervous exhaustion.

Robin Williams is Walter Finch, writer of dime-store detective novels and part-time psychopath. Williams plays the role straight, keeping his manic comic-ham persona completely out of sight. My one small complaint is that we are never really told much about how he became the killer we see. I mean he's middle-aged but never killed before? What was it about this particular girl and/or relationship that finally sent him over the edge? The audience can only guess at these things. Still he is a much more believable villain than the ridiculous Hannibal Lecter, meaning he has no special powers or talents enabling him to kill and then elude police.

Hilary Swank plays Ellie Burr, a young detective who idolizes Will Dormer and is thrilled at the chance to work with him. Before long, however, she knows perhaps too much about the man she has spent years aspiring to be like and must make a moral decision regarding his fate.

Three fascinating characters in a gripping story told with the visual style and pace of a master director. Sounds like three stars to me. 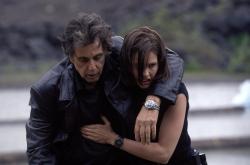 Insomnia has a great cast. Pacino plays a unrepentant cop. Williams plays against type, and plays a serious psychopath. This movie has a unique location in Alaska, where the sun doesn't set for a period of time in the summer. What this movie doesn't have is any surprises. I predicted how this movie would end 20 minutes into it.

Pacino and partner head to Alaska to help solve a murder. In the midst of some mist, Pacino's cop shoots and kills his partner, by accident. The partner had just told him that he was going to save his own butt by informing Internal Affairs about some infraction he and Pacino were previously involved in. So did Pacino purposefully kill his partner, or did he actually think it was the killer they were pursuing?

The answer is actually moot. At this point in the movie his character is so flawed that I could see the ending of this movie clearer than crystal. Patrick wrote that you don't know where this movie is going. If you can't figure it out then you have not seen enough movies.

Patrick went on about the acting these stars do. I didn't see anything impressive here. I wonder if Williams and Pacino just wanted a free trip to Alaska. They walk through there roles well enough. I give credit to Williams for not cracking any adlibs. I related to Pacino's insomnia. I use to work over night and hated trying to sleep in the middle of the daylight. However, I was smart enough to take a dark blanket and cover the window. This brilliant detective's best idea is to use some clear tape. Patrick also goes on about Hilary Swank's performance. She has one scene where she has to make a moral decision, but it really is pointless by then. It is at the end of the movie and everyone's fate is already settled. She has actually very little lines compared to the two stars. She probably took this role so she could play opposite them. Because there really is not much for her to do.

I want to make a joke where I write that this movie cured my insomnia, but it really is not as bad as that. The scenes with Pacino's detective and William's psycho play out interestingly enough. Yet, these two are both so flawed that you really are not rooting for either one to succeed. So you just watch and wait to see how each will get their comeuppance.

While this movie isn't quite so good as Patrick makes it out to be, it is also not nearly so bad as Eric pretends.  The outcome for most movies can be predicted when it comes right down to it.  The important thing is whether or not the movie is enjoyable enough so that it doesn't matter if you know how it ends.  I found this to be the case with Insomnia.

Along with the interesting and flawed characters described by Eric and Patrick, this movie contains some beautiful visuals.  Of course there are the requisite scenery shots of the Alaskan landscape, but the scene in the mist when Pacino is chasing Robin Williams, I found eerie and nicely shot.  The hallucinations Pacino experiences as his insomnia grows worse are also interestingly presented.

You might see where the movie is going, but with such a talented director and cast, it doesn't really matter, since you'll be so entertained along the way.