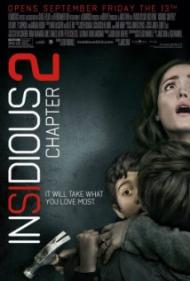 Leigh Whannell as Specs and Angus Sampson as Tucker in Insidious: Chapter 2

Insidous: Chapter 2 is more of the same.  A haunted house turns out to be a haunted person. It starts a bit slow but builds to an intriguing and satisfying resolution that answers some questions from the first film.

If you have seen Insidious (2011), you know that at the end of the movie, Josh came back from the nether world with a different spirit inhabiting his body. Unfortunately his wife Renai has not seen it and therefore does not know that her husband’s spirit is trapped in a dark purgatory while a serial killer’s soul is in Josh.

There are plenty of spooky sounds and moving objects that give Renai and her mother-in-law Lorraine plenty of frights. “Josh” tells Renai to just ignore it all and it will go away. It sounds like flimsy advice to Renai, especially after one specter bitch slapped her.

While Renai is trying to figure out who keeps playing the piano, Lorraine teams up with Specs and Tucker, Elise’s assistants, to investigate what is going on. They go to an abandoned hospital and an empty house. Empty if you do not count haunting spirits.

The entire original cast returns including Lyn Shaye as Elise, the all-knowing medium. Yeah, I know she died in the first film, but since this is a movie about people whose spirits travel between dimensions…

Throughout the film, characters are constantly entering dark buildings or rooms. They either turn on a light that does nothing for the shadowy corners or they carry a light that barely illuminates a few feet. I wanted to shout, “Hey idiots! Why not leave every frigging light in the house on?” Even Elise explains, “In my line of work things tend to happen when it gets dark.”

Insidious: Chapter 2 starts slow and seems to have a few less frights than the first chapter. It picks up with the humorous presence of Specs and Tucker. Their investigation with Lorraine is the best part of the film. Not only are they the most entertaining characters in the film, but they find themselves in the scariest situations as well as the most interesting. The film hints at the end that they may have a spin off movie. It could work. 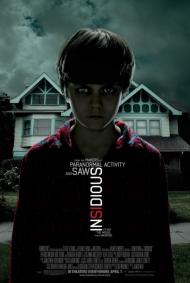