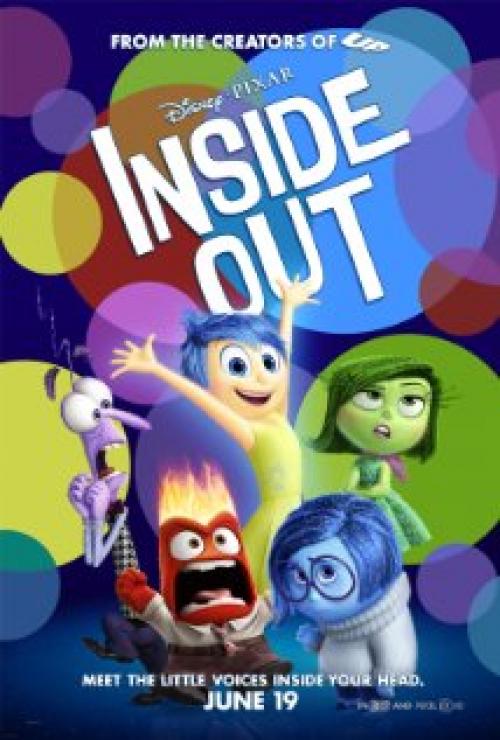 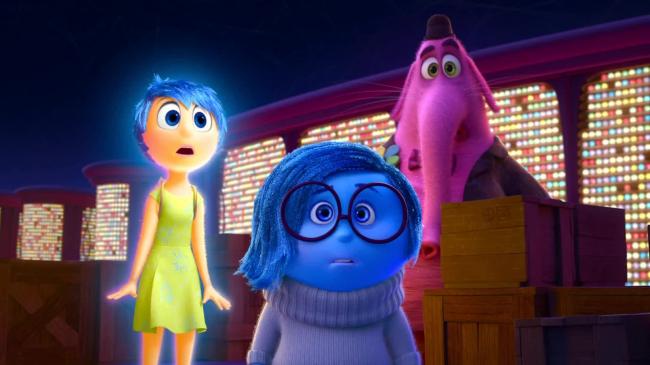 Inside Out is just the 2nd original Pixar film since 2009's Up. During those 6 years they released Toy Story 3, Cars 2, and Monster's University, which were all sequels. They also released Brave, which, while not technically a sequel, felt like Pixar's take on the Disney Princess. This movie is not only their most original film since Up, but also the best. It contains heart, humor, and cutting edge computer animation. The three hallmarks of Pixar.

The plot on the surface is very simple. A young girl named Riley and her family move from Minnesota to San Francisco where Riley must learn to adjust to her new home, school, and environment. She goes through the usual growing pains and emotions any child would go through in that situation. The real heart of the story takes place entirely inside Riley's head where her emotions are personified as little beings living and working in the control room that is Riley's brain.

The 5 emotions represented, which the writers whittled down from roughly 20, are Joy, Sadness, Anger, Disgust, and Fear. Joy, voiced by Amy Poehler, is the de facto leader, and the dominant emotion, as you might expect in a child from a happy home. Joy's chirpy optimism keeps things moving along, with the other emotions content to follow her lead. However, when the move starts to get Riley down, Sadness (Phyllis Smith) starts asserting herself, which causes some conflict. When the two polar emotions fight over a memory-represented by a glowing marble- the two of them are accidently ejected from the control room and sent to long term memory storage. The two of them must then find out if they can work together long enough to get back before Riley does something drastic.

In a way, Inside Out is revisiting some of the themes it explored in Toy Story 3. Riley is growing up. She's still a child obviously, but she's approaching puberty and the complexity of emotions that brings. She's no longer guided by one defining emotion at a time.

Perhaps the best example of passing childhood is represented during their journey through Riley's brain, when Joy and Sadness come across Bing Bong, Riley's make-believe friend. Almost completely forgotten now, he wanders the memory stacks. He is only too happy to help the emotions on their journey, with the hopes of being remembered one last time by Riley. And leave it to Pixar to make you misty-eyed over a pink creature who's part cotton candy and part elephant.

Along with the inner-workings of Riley's brain, we are also shown flashes of the inside of her parent's inner-workings. These offer a few chuckles despite being loaded with gender stereotypes straight out of a 1970's sitcom. Funnier than those moments are the similar scenes during the end credits where we see the inside of even more characters, including my personal favorite, the inner-working of a cat's mind.

Like the very best animation, this movie works on several levels. The kiddies might enjoy the bright colors and comical characters, but the grown-ups can see how everything that happens inside Riley's mind is symbolic of what's happening on the outside. Anyone who has ever been depressed will fully understand the loss of joy and sadness at the same time. And there's also a few jokes that will only be understood by the adults, such as a reference to the film Chinatown.

Although I loved Toy Story 3 and enjoyed Monster's University (the less said about Cars 2 the better), it's nice to see Pixar back on top of their form with an original film. It's not just the Best Animated movie of the year so far, but one of the best movies period. 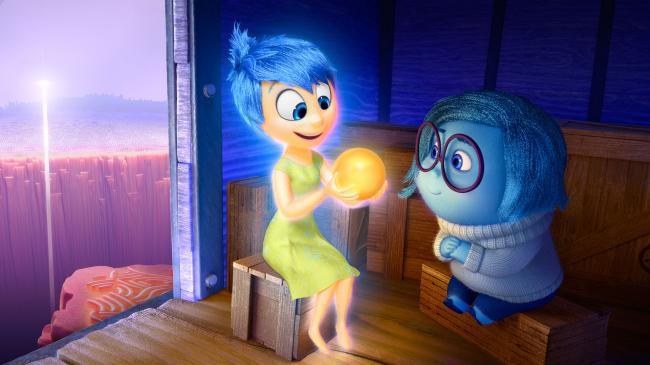 Joy and Sadness riding the train of thought in Inside Out

The plot to Inside Out is simple and not just on the surface. On the outside we have a girl adjusting to a new life in a new place. Been there, seen that. In her brain we have a group of one dimensional characters who have a single goal in mind. Joy and Sadness trying to get back into headquarters is a bit like the residence of Gilligan’s Island trying to get back to civilization.

Where the story succeeds is in its depiction of how our brains function. It is all kept at a pre-school level but it is a very entertaining way to explain our cerebral activity. Where Inside Out truly succeeds is with its explanation of emotions and in how we truly need all of them to be mature, well rounded human beings.

We instantly like Joy. She is there for all of the good times and is constantly encouraging Riley to have the happiest life she possibly can. She spends a great amount of her time trying to suppress the other emotions; Anger, Disgust, Fear and, especially, Sadness. They all come across as negatives to her singular positive disposition.

As Scott described, Joy and Sadness end up lost in Riley’s brain where the two of them must work together in an effort to get back to command central before Riley does something drastic. Their adventures provided the film’s animators with plenty of opportunity to be creative as the two emotions traverse Riley’s brain and thought processes. The journey is not as exciting as the animation would have us believe. We know where the story is heading and several times I found myself thinking how long it was taking for them to make it back.

I became a tad bored with Joy’s and Sadness’s constant setbacks but the film’s payoff is truly amazing. In this current world we live in, we are bombarded with commercials about different medications intended to make us happy. We hear constantly about depression and issues of manic depressives. People have made millions of dollars medicating the unhappy. Others have made careers out of being life coaches to the miserable. Our society has been working overtime telling us that we are all supposed to be happy all of the time.

The ending of Inside Out tells us the astonishingly honest truth that sometimes we are in fact, meant to be sad. In fact, it is sometimes necessary. We are human beings designed to feel an array of emotions and there is no set amount that each human should experience. The scene where Joy steps aside and allows Sadness to take over the controls was truly one of the greatest moments I have ever experienced in an animated film. I am having a bit of a hard time believing it took a children’s film to teach us such a basic truth about the human condition.

I would be interested to see how the occupants of Riley’s brain would act if Riley’s parents listened to the pharmaceutical propaganda and drugged her up with happy pills. Now that would be a whole new level of emotional and mental education. 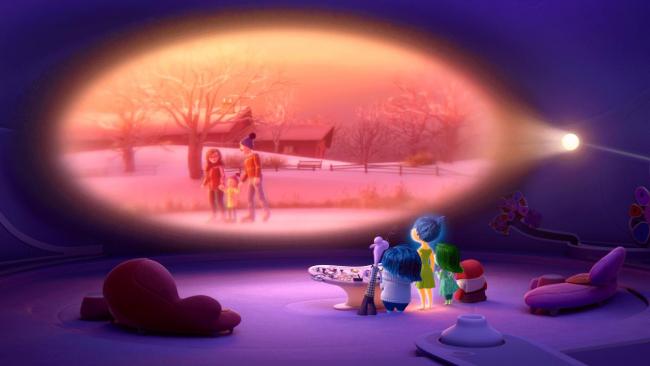 We all agree that the plot to Inside Out is simple - profoundly simple. The cleverly written script and imaginative re-imagining of the inner workings of a child's mind make this one of the most thoroughly enjoyable animated films to come along at least since Up. Everything that happens to Riley emotionally gets perfectly mirrored and expressed through the characters inhabiting her brain. The set-up is like the old Fox sitcom Herman's Head, only with intelligence, humor and heart.

Amy Poehler was brilliant casting as Joy; nobody does the constantly upbeat, can-do personality type better. Her speaking voice is vibrant, colorful and joyfully expressive. Phyliss Smith is equally good as Sadness. Her mopy delivery and incessant melancholia are perfect for the part of Sadness. Together they create a classic movie duo as they journey to save Riley.

The scene Eric mentioned where Joy turns over control of Riley's emotions to Sadness is indeed emotionally touching. It sublimely demonstrates the cathartic nature of tears. In an earlier scene the eternally chirpy Joy finally hits rock bottom (literally) and experiences sadness for the first time. It is the beginning of Riley's maturation into adulthood – a time where our emotions are much more complex and often overlap. Ironically, for the sake of a few laughs, this message is contradicted by the inner workings of Riley's parents' brains.

As Scott wrote, they include just about every gender stereotype in the book. And why are the emotions in Riley's brain personified as both male and female while those in her parents' brains are all of the same gender? That's a small problem though, although I also agree with Eric that the story takes a bit too long to reach its inevitable conclusion. Despite these minor flaws Inside Out deserves to (and will) win the Best Animated Feature Academy Award at next month's Oscars.