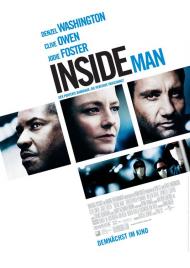 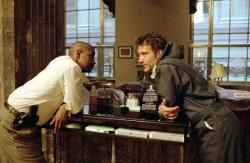 Denzel Washington and Clive Owen in Inside Man.

Inside Man is the most entertaining thriller to come out of Hollywood in a long while. Even if its resolution fails to live up to its premise, it still delivers solid entertainment from some heavyweight stars. Like too many heist movies, its robbery is a little over complicated, but any plot weaknesses are buried by the sheer enjoyability of the movie. Unlike most Spike Lee directed movies, this one doesn't sacrifice entertainment for the sake of a message, although there are still elements of Lee buried throughout the film.

Clive Owen opens the film from a prison cell, telling the camera about his recent bank robbery, which he describes as the "perfect robbery". Owen, along with his "gang", bursts into a downtown Manhattan bank where they take the customers and employees hostage, forcing them all to dress in the same black coveralls and mask. While the gang goes about whatever it is, they're going about inside the bank, the police set up a perimeter around the building.

Detective Frazier (Washington) is the officer in charge. Despite his best efforts, he can make no sense of the robbers' behavior, including their request for a bus to take them to the airport where they expect a plane to be waiting for them. His efforts in negotiating with them are hampered by Madeleine White (Foster), who has been hired by the bank's owner (Plummer) to intervene on his behalf over the matter of some sensitive material of his that is located in one of the bank's safety deposit boxes.

While the plot does contain some genuine tension, it is the characters, as embodied by the actors, which really brings the movie to life. Washington is particularly good as Frazier, bringing charm and smarts to the role. Foster is also quite good as the morally ambiguous trouble-shooter. She should consider playing villains more often as she brings a nice iciness to the part. Owen is given the least developed character in the film and we never really learn what it is that makes him tick, but this is more a problem of the script than of his performance.

Even the smaller characters, several of whom are played by big stars such as Willem Dafoe and Christopher Plummer, are given dimension. There's a nice moment with a group of police officers as they argue whether or not trains start or stop at Grand Central Station. It's in the little moments like that the movie really shines.

The ending of the movie seems a little too neat and ties together a little too evenly, but is to be forgiven. With so many 'message' movies to come out of Hollywood last year, it's nice to see one that isn't afraid to go all out for sheer entertainment. 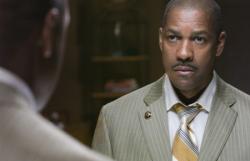 Denzel Washington in Inside Man.

I agree; this one is definitely character driven. They are vivid and compelling enough to distract from the unreality of the movie, allowing you to easily fall into the world onscreen. The plot is familiar but attractively delivered with a few surprises thrown in - some that work, some that don't.

The weakest part of Inside Man, at least as a heist movie, is the tension level or lack thereof. It starts high but by the midway point has dropped off considerably. One of the surprises that doesn't work directly affects how much danger you feel for these hostages. I won't say what happens but if you're fooled by this scene then you haven't seen enough movies.

I wasn't expecting this movie to be as funny as it is. There are some laugh out loud moments. The scene Scott mentioned with the dispute about Grand Central Station is one, the flash forward scenes of the police interrogating the hostages are also funny. The dialogue offers up a few memorable lines. My favorite is when Jodie Foster tells Denzel Washington, “Believe me, my bite is worse than my bark."

Spike Lee has pulled a Woody Allen. Like Allen's latest movie Match Point, Lee takes a step back and straightforwardly directs the story. His mark is there, most obviously with his dolly shot of Det. Frazier floating down the sidewalk. But for the most part he stays out of the way and lets the story and actors do the work. In my opinion this is the best thing a director can do.

Jodie Foster's character is probably the strongest female role in any Spike Lee movie. He has been criticized in the past for his treatment of women onscreen. Foster here is powerful, and driven by her own ambitions and goals. She's no man's plaything. Of course in the scene where the hostages are told to strip to their underwear, the camera briefly shows the men before lingering on the women. 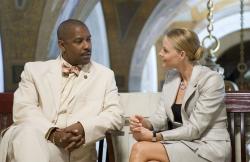 Denzel Washington and Jodie Foster in Inside Man.

It does not sacrifice entertainment for the sake of a message, but Spike Lee does include his social/political opinion none-the-less. No one character in Inside Man is completely morally upstanding. Everyone can and is, at some point in the movie, bought. Lee frames the message well. Early in the movie, Detective Frazier complains about his girlfriend's loser brother. He has a long criminal record and is "stupid" by Frazier's account. At the end of the movie Frazier walks into his apartment as the brother is sleeping on the couch. The only reason this character is even in the movie is because he represents the stereotypical image of a criminal: that of a minority young male. The bad guy in this movie is his polar opposite; a rich educated white man. Thus Lee is trying to make a point that criminals are of all skin colors and tax brackets. However, Lee's message is moot because Hollywood always has rich white men as bad guys so he just ends up perpetuating one stereotype while trying to distract from another.