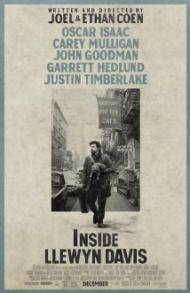 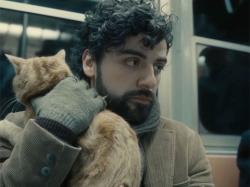 Oscar Isaac in Inside Llewyn Davis.

Perhaps the greatest feat the Coen brothers pull off in this, their latest film, is to make such a compelling story out of very little plot and an unsympathetic lead character. As with all of their films, Inside Llewyn Davis is filled with interesting characters and a rather dark humor. Over the years their work has matured and their once overt quirkiness has become more subtle and this film continues that trend.

Oscar Isaac stars as the title character in what could be a star making performance or at least a career altering one. His Llewyn is a singer on the fringe of the folk music scene in Greenwich Village in the early 1960s. He's a selfish man who seems to think only of himself. He has no home and instead floats around between friends and acquaintances who will put him up on their couches or in their spare room. One of the apartments he stays in is occupied by Jim (Justin Timberlake) and Jean (Carey Mulligan), a folk singing couple. At some point in the past Llewyn slept with Jean and so must deal with the consequences of that.

There's not much plot. We simply follow Llewyn over the course of a week. His music career is going nowhere and he debates whether or not he should continue to try or whether he should give it up and go back into the merchant marines. In a last ditch effort to spark something he goes on a road trip to Chicago to see a club owner who has been sent a copy of his album. We learn some of his past and about his family. One of the most defining events of his recent past seems to be the suicide of his former music partner, which appears to be one of the only events that evokes a genuine emotional response from him. There's also a cat that Llewyn encounters on several occasions who provides some symbolism to the tale.

In less talented hands, such a scant story might not have worked, but the Coens have made a film that keeps you watching to see what will happen to Llewyn next, while at the same time making you suspect that nothing at all will happen to him. The opening and closing scene gives the impression that his life is in a repeating cycle and this one week is probably very similar to many weeks that have come before it.

A big part of the reason the film is so compelling is the central performance by Oscar Isaac. He underplays the part brilliantly. He has no big emotional, over-the-top scene and yet he grabs your attention and keeps it. He's in every scene and he carries the film easily. There are also a few nice supporting performances. Carey Mulligan has a couple of nice scenes as the angry girl, while the always reliable John Goodman is a scene-stealer in a small part. Timblerlake, whose part is so small as to almost be a cameo, is rather bland.

Visually the film is beautiful. It perfectly captures the look and feel of the Village in the 1960s. The cinematography gives it an aged look that makes you feel as if you really are looking into the past. The sets, costumes and every little detail is evocative of the era.

The Coen brothers are two of the most interesting filmmakers working today. They and a talented cast make this one of my favorite films of 2013.

Like an alley cat, Llewyn Davis has no real home. He wanders from one place to another; stopping anywhere someone will feed him or give him temporary shelter. He cares for no one but himself. Only idiots think he is a genuine friend. Like a cat, he may climb on your lap, but for his comfort not yours. Llewyn has impregnated more than one woman, giving little thought to the women or the offspring.

Other than seeing Llewyn as a cat, this movie has little to offer. As Scott mentioned, there is truly not much story here. Llewyn wants to make it as a folk artist, but only on his terms. He turns down an opportunity to be a backup singer. Llewyn is only happy when he strums his guitar and purrs.

Although a drama first, there are a few laughs to be found here. The funniest scene is when Llewyn barely hides his true feelings over a picture of a couple’s ugly baby. The scene ends with an angry woman asking about her cat's missing scrotum. The symbolism there is obvious.

Oscar Isaac has stated that he was inspired by Buster Keaton when playing Llewyn Davis. Like the Great Stone Face, Isaac internalized much of Davis’s emotions. After all, Llewyn is not a dog, whose emotions are easily read.

That may have helped his performance but it does nothing for a plot that goes nowhere. Llewyn’s life is cyclical but that in and of itself does not an interesting film make. It ends with a cameo by Bob Dylan, but we have no reason to believe that Llewyn will benefit from the emergence of a famous folk singer. Some cats just get luckier than others.

John Goodman and Oscar Isaac in Inside Llewyn Davis.

At no point during this film did I feel as if I truly got inside Llewyn Davis. He remains an elusive figure throughout the movie, one who keeps his friends, his fans, and subsequently the movie audience, at arm's length. I get that this is just a fragment of his life but even so it feels incomplete. Clearly the Coen brothers were infatuated with the idea of a struggling folk singer in Greenwich Village in the early 1960s. I agree they've done a decent job of conjuring up the era, at least as we envision it anyway. But I don't think they had enough of a story to justify a feature length movie. I didn't find it to be all that compelling.

The cat symbolism gets to be a bit much after awhile. He abandons the cat (his dreams) on that stretch of highway only to possibly hit it on his way back to New York, thus killing his dreams of success as a folk singer. While in Chicago he looks at a poster for the Walt Disney movie The Incredible Journey; a movie about household pets who travel hundreds of miles to reunite with their owners (which, by the way, wasn't released until 1963, two years after this movie is set). The final bit of overdone feline symbolism is when Llewyn returns to the apartment of the older couple, whose cat he let out at the beginning of the movie. Guess what? Their cat has returned from his odyssey and his name, that Llewyn could never remember, is... wait for it... Ulysses.

I'm a bit surprised that neither of my brothers mentioned the songs in this movie since music is such an important part of Llewyn's life. Oscar Isaac performs a mix of traditional folk tunes as well as a few original compositions by T-Bone Burnett. “If it was never new, and it never gets old, then it's a folk song.” The best of these is a novelty song called “Please Mr. Kennedy” that is sung by Isaac, Justin Timberlake, and Adam Driver, recording as The John Glenn Singers. This song is a reworked version of The Goldcoast Singers 1962 recording "Please Mr. Kennedy", that was influenced by a 1961 tune called "Please Mr. Kennedy (I Don't Want to Go)", which was itself a parody of the 1960 novelty hit "Please Mr. Custer". (As kids we owned a recording of this last song and played it often.)

The opening and closing scenes do more than suggest that Llewyn's life is cyclical. It almost seems to be suggesting that he is caught in a week-long time-trap similar to Bill Murray in Groundhog Day. The exact same dialogue is used in both scenes and isn't that the same man waiting for him in the alley? Are the Coen brothers saying that Llewyn Davis' life is such a dead end that he is destined to repeat this week over and over again? If not and it's just a flashback device meant simply to illustrate the fact that Llewyn's life is going nowhere then, like the cat symbolism, it is overdone.

A sublime central performance from Oscar Isaac, and its hauntingly atmospheric recreation of the era, aren't enough to offset the slight plot, too obvious symbolism, and overly gloomy tone of Inside Llewyn Davis.