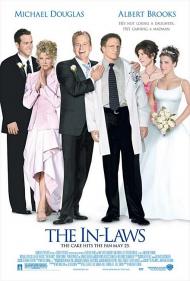 Albert Brooks and Michael Douglas in The In-Laws.

The In-laws could of and should have been a great movie. The main characters are so uneven that the film falls flat.

Michael Douglas is a CIA operative whose son is about to marry. The bride's father, Albert Brooks, ends up involved in Douglas's assignment. From skydiving off Chicago's John Hancock building to fending off the homosexual advances of a head mobster, Brooks plays the hysterical conservative.

The film contains enough action, although it is tame considering the two male leads are geriatric candidates. What comedy is here, is lacking in any punch. Brook mistakes Douglas for having sex in a bathroom stall and I hope I never have to see Brooks ass in a thong again. Candace Bergen is the funniest thing in the movie as Douglas's ex. Unfortunately, she is only in a few scenes.

Barbra Streisand may as well have gotten screen credit for this movie. She is referred to many times. Douglas and Brooks fly her jet to France. The groom and bride get a call from the jet. Caller ID picks it up as "Barbra Streisand, Private." When Brooks talks to his wife and tries to explain what's happening, his wife assumes he is with Streisand and all of the bridesmaids get excited.

Douglas's secret agent, through the course of the movie, learns to be a better father. Brooks conservative father learns to loosen up. The audience learns to respect critic's opinions. This movie should have gone over the top with the comedy. Instead, it seems to hold back to often, as if it is attempting to occasionally take itself seriously.