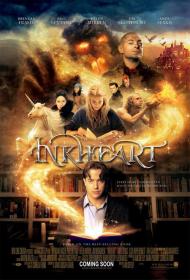 Inkheart is one of those movies that could only be a children's movie, or in Hollywood marketing vernacular; a film for the whole family, which is oftentimes just code for the fact that there are plot holes, but don't nitpick them because its aimed at kids who won't notice them. The central characters in this movie have a power that in reality would quite simply change the history of Earth and quite possibly the lives of every man, woman and child on the planet, but here in this story that power is just used to create a mildly fun adventure. If you can get around that fact in your head then you might enjoy this movie a little.

Brendan Fraser plays Mortimer Folchart, a husband and a father who has a very special ability. When he reads a book out loud, whatever he is reading becomes reality. His voices draws characters, objects and events out of the book, but puts something back into the book as well. He only learns that he has this ability quite late in life (why that is, is never explained), when he reads the book Inkheart out loud to his daughter, causing several characters from the book to come out of it, but his wife to get trapped inside it. The villains from the book steal Fraser's copy of Inkheart and he spends the next nine years trying to find another copy (apparently Amazon.com doesn't carry it) so that he can try to read his wife out of it.

Dustfinger (Bettany), one of the characters from Inkheart, the novel, wants to get back into the book because his beloved is in there (a cameo by Bettany's real-life wife Jennifer Connelly). He tracks Mortimer down and betrays him by helping Capricorn (Serkis), the villain of Inkheart, capture Mortimer with the promise from Capricorn that he will force Mortimer to read him back into Inkheart.

Capricorn, despite being mean and nasty, is the only one who realizes the potential of Mortimer's power. With the help of another reader with Mortimer's power, he has set himself up in a castle with servants, weapons and money. The only problem is his reader isn't very good and most of the items that come out of the books by him aren't very good so he wants Mortimer to start reading for him. So without giving the entire plot away, it's up to Mortimer to some how get his wife back and defeat Capricorn.

My problem with this story is that Mortimer's powers are never fully exploited. He has God like powers that could solve all of his problems very simply, especially when we learn later in the movie that he can create or control anything by just writing it himself and then reading it out loud. Therefore defeating Capricorn and bringing back his wife would be as simple as writing down that it happens. But even if he couldn't do that, why not just read out loud a story about Superman or James Bond or King Arthur or some other great hero who could help him defeat Capricorn. Or, here's a biggie, why not read the bible? What would happen if he did that? Could he create God?

The Wizard of Oz is referenced several times in the movie. They use the twister from that book as a diversion so they can escape and Toto shows up and ends up helping them out at the end of the movie. Obviously it would have cost money to obtain the rights to characters from other famous books, but they should have gone ahead and done it, because it would make for a much more entertaining movie. It really feels as though Mortimer's powers are limited because of it. You keep expecting him to read some famous book out loud and have all sorts of famous literary characters appear, but of course that never happens.

You certainly can't complain about the cast. Fraser, Bettany, Serkis, Mirren, Broadbent and even newcomer Bennett, are all quite good. They do their best with what they have to work with, but it's just not enough.

I suppose I should have just watched and enjoyed this movie for what it was, but all the time I just kept thinking of all the things it could have been. Its central premise is one of infinite promise, but it delivers a very mundane tale.

Sure, this is a family, fantasy film, but the leads all take it quite seriously, and are the saving grace for a film that has more plot holes than actual plot. The author wrote herself into a corner when she chose to give her main characters an amazing power, but never lets them use it to it's fullest. It would be like making a Superman movie where he can only sometimes fly.

The adventure is fun enough for a PG film. The pace is fairly quick. I agree though, it would have made for a more entertaining story had we seen more characters from other books. Although The Wizard of Oz is the only novel actually named, the movie does hint at others, including Huckleberry Finn and King Arthur.

I was less put off by the lack of literary references than I was the preaching to kids to pick up a book. The story seems to be working over time on trying to get kids to read. All of the main character's power comes from reading. Mirren gives a speech about how she has been all over the world, including Middle Earth, by merely reading in her library. The DVD includes an extra feature of Bennett reading a section from the book that did not appear in the movie. More thought should have been put into the plot and less into it's reading is important message. After all, if no one watches the movie, the message never gets out anyway. 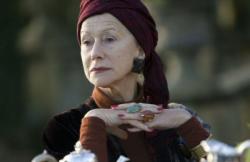 Despite the obvious plot holes I enjoyed this movie. It is fast-paced, well-acted and filled with colorful characters and exciting locales. Jim Broadbent and Helen Mirren steal the movie as the eccentric author of the titular book and the book loving eccentric Aunt, respectively. Eric, I didn’t think they preached reading too much. Sure they encourage it but in a fun manner.

As a child I read “The Wonderful Wizard of Oz” over and over and even began duplicating a library copy in longhand once (I made it all the way to the scene with the field mice before giving up). I really enjoyed all the references made here including the winged monkeys. If I had watched this movie when I was 10 I’ll bet it would have become a favorite of mine.

They also read from “The Arabian Nights”, the character Farid comes out of it and provides some laughs. He also serves as a character for boys to relate to as this is mostly a girl’s adventure story.

Wow Scott, you took this simple children’s movie way too seriously. Did you really ask the question “Could he create God?” Really? I want to ask both Eric and Scott where their inner child was hiding while they were watching this movie. Inkheart, while certainly not a classic, is quite amusing and imaginative.