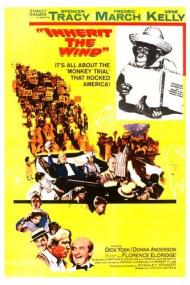 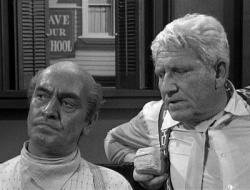 Fredric March and Spencer Tracy in Inherit the Wind.

Producer/director Stanley Kramer continued his series of socially conscious movies with 1960's Inherit the Wind. This time tackling the topic of evolution by recreating the real-life trial of a high school science teacher in a small town in Tennessee who was thrown in jail for teaching Darwin's theory to his class in 1925. Famous orator and three time democratic presidiential nominee William Jennings Bryan made headlines around the country when he agreed to represent the state. The case gained even more attention when famed attorney Clarence Darrow arrived in town from Chicago to defend the accused.

Kramer hired two titans of the silver screen to go toe-to-toe in this blistering and witty courtroom drama. Although the names are changed for the movie it is clear who the characters are based on. Spencer Tracy is Henry Drummond and Fredric March is Matthew Harrison Brady. At the time this movie was made they were the only actors in Hollywood with two Best Actor Academy Awards. Gene Kelly - in a rare nonmusical role - plays a cynical newspaper reporter from Baltimore. He is there to cover the story but is openly on the side of the teacher. To complicate things a bit the accused man is engaged to the daughter of the fire-&-brimstone minister leading the local attack. All this sets the stage for a riveting argument over an individual's rights versus a communities rights.

Although Kramer was clearly out to make a point he never forces the character of Brady into a stereotype. He is portrayed as a flawed but once brilliant man who has let his ego get a bit carried away. Fredric March is great in the part, which is by far the more showier role. He has the bravado and swagger of a man used to being the center of attention wherever he goes and the pious stubborness of someone who knows that he is on the side of righteousness. As Gene Kelly's character says at one point, 'He's the only man I know who can strut sitting down.' March manages to bring an aspect of the flawed human underneath the veneer that is quite poignant and sad.

Spencer Tracy plays Henry Drummond very much as a common man with idealistic beliefs. He is not the great speaker that Brady is but is a much better lawyer. He also happened to be an old friend of Brady's who even campaigned for him in the old days. My favorite exchange between the two men comes early in the movie when they first come face to face. Brady says, 'Now after all these years we find ourselves on the opposite sides of an issue.' To which Drummond responds, 'Well, that's evolution for you.'

This movie has some memorable dialogue. When Spencer Tracy first arrives in the small southern town he is greeted by Gene Kelly with the line, 'Welcome to heavenly Hillsboro, the buckle on the bible belt.' Gene Kelly is quite good as the smirking, quick-with-a-one-liner, reporter who, although he is professionally on the side of the teacher has no personal convictions at all. In Tracy's best scene he calls Kelly, 'a poor slob who is all alone in the world'.

This movie features several faces that would later become well-known on television. Harry Morgan, who would become famous on Dragnet and then even more famous as Colonel Potter on M*A*S*H (who, by the way, is still living as of this writing at the age of 89), plays the judge presiding over the case. Norman Fell who would later play Mr. Roper on Three's Company has a small part as a radio announcer, and the science teacher at the center of the controversy is played by none other than Darren number one from Bewitched, Dick York.

While not a perfect movie, it could, for example have been better edited and given a slightly faster pace; but then Stanley Kramer was known for being a bit long winded. Still Inherit the Wind remains an entertaining movie with an interesting topic, great dialogue and very fine acting. 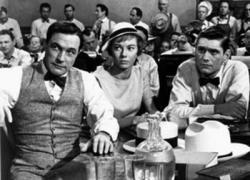 Inherit the Wind is a completely biased story. Drummond comes across as intelligent and wise while the religious Brady is portrayed as very small minded and extremely arrogant. Drummond gets all the good lines and makes all the good points. Brady just quotes the Bible and announces his faith whenever he has nothing better to say, which is often.

The movie misses the entire point of the original trial, which was that a community was outraged by the fact that they taught their children creation, as described in the Bible, while a teacher, without their permission contradicted them at school, by teaching evolution. Lets be honest, evolution is about as provable as global warming. If you want to believe in it you can collect enough statistics to convince yourself it's true. But is that not what religion is? Believing in something that you think and/or feel is real.

Inherit the Wind is about an, "argument over an individual's rights versus a communities rights." But the real trial was about the rights of a family to teach their children how they want to. We do not live in Communist Russia where children were forced to learn the glory of Stalin. We do not live in an Muslin extremist village where children are taught in school to hate America. That trial is still relevant today as parents debate the rights of schools to teach sex education and hand out condoms whether the parents agree or not.

Thus, Inherit the Wind fails miserably as a movie because it only shows one side of the argument. These people were religious, yes, but this movie portrays them all as ass-backward, hate filled ignoramuses. Sure that is how atheists like to think of people of religious faith but they are not all that way. Had Kramer spent some time making Brady and the religious population a little kinder and smarter, the debate would have been more engrossing. As it is portrayed here it is simply the brilliant Drummond frustratingly banging his head against a wall as he deals with a group of narrow minded religious zealots. The fact that Drummond says he believes in God at the end of the movie only serves as a slap in the face. The movie wants you to think that it makes him a very progressive person, when in fact it just makes him a hypocrite and the most arrogant person in the movie.

Even the liberal biased reporter, Hornbeck, rings false, because he actually admits to having an agenda. "Mr. Brady, it is the duty of a newspaper to comfort the afflicted and afflict the comfortable." You will never see one of those CBS liberal anchors admit their bias. 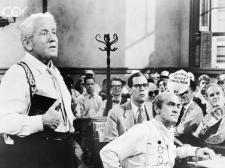 A good movie, but the true story of the Scopes Monkey Trial sounds more interesting.

Eric, I actually thought you'd like the character of Drummond. At the end of the movie he holds up the bible and Darwin's Descent of Man. He weighs both of them up as if to ask which is more important. He then puts them together and carries them away as if to say, they're both as important as the other. You seem to be arguing that creationism deserves to be taught in schools as well. Personally, I disliked the ending also, but only because I felt it was a cop out!

Here and before Eric, you've compared science to religion as if they're the same thing, but they're not and here's why. With religion you are told what to believe and are not allowed to question it. If you do question it you'll eventually be told that God works in mysterious ways his wonders to behold. With science, you are free to question all you want and if you can prove that you are right and a previous theory was wrong then science will change and adapt to this new proof. You could go through the bible point by point showing how this, that and the other could not have happened and people who believe in it will still never change their opinion. With science you can't just say something happened because the super-hero in the sky made it happen. You have to be able to show evidence and the line of reasoning that you used to reach that conclusion. Others are then free to try to disprove or confirm your theory. With religion you can pretty much just believe whatever you want without ever having to bother with things like proof.

Of course the true story of the Scopes Monkey trial is very different than how it is depicted in this movie. The true story is that the ACLU wanted to test the Butler Act (which is the law that made it unlawful, to teach any theory that denies the story of the Divine Creation of man as taught in the Bible, and to teach instead that man has descended from a lower order of animals.) So they looked for a teacher to volunteer. They convinced the businessmen of Dayton, Tennessee that the trial would be good for business if held in their town and got Scopes, a football coach who had taught science for just one day as a substitute teacher to claim that he had taught evolution. The argument Clarence Darrow used to argue his client's defense was what would become known as Intelligent Design. He basically tried to prove that teaching evolution didn't automatically mean that someone was denying the existence of god.

The irony of the Scopes Monkey Trial is that the text books used in the school where Scopes taught already included a chapter on evolution and it was taught in classes. Such was the publicity of the trial that while before the court case only 3 states had anti-evolutionary laws on the books, by one year after the trial, 13 states had laws against the teaching of evolution and 41 bills or resolutions had been introduced along those lines. Perhaps if the ACLU had merely let the educational system evolve naturally instead of trying to intelligently design it, then evolution would just have been taught as a matter of course.

I go into such detail about the true story only to show how much more interesting it is than the fiction of this movie. Why has no one ever made a version closer to the truth?

As to the movie, Patrick you rave about Charles Coburn, but clearly this is Spencer Tracy's movie. His speeches (and man, this must have been a long script) are impassioned and strongly delivered. While the supporting cast is good, the movie is carried on his shoulders and he carries it effortlessly.

Gene Kelly is also good in a part that is very against type for him. Why didn't he keep making movies? He shows here that he can hold his own in non-musical roles. It's a shame he didn't do more.

I do agree with you Patrick that this movie could have been trimmed. They could easily have trimmed 10 to 15 minutes off the beginning before the trial starts. Also, the love story between Cates and the preacher's daughter could have been cut completely. The teacher Cates is just a puppet in the trial and completely overshadowed by the two attorneys. The romance adds nothing to the movie except running time.

Although I still think someone should make the true story of the trial, this one is quite good and raises a number of points to argue about. Its main attraction though, has to be Spencer Tracy.