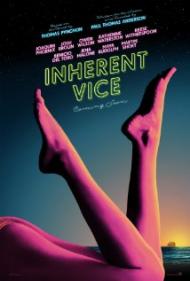 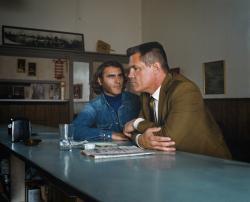 Paul Thomas Anderson's Inherent Vice, the first ever cinematic adaption of a novel by notoriously reclusive writer Thomas Pynchon, is a meandering, sometimes incoherent, unnecessarily complicated, halfhearted counterculture comedy. It's set in and around L.A. during the summer of 1970 and it combines film noir with the end of the psychedelic California dream. It features dozens of familiar faces in support of Joaquin Phoenix as private investigator -and incessant pothead- Larry "Doc" Sportello.

Doc is in nearly every scene. He's a hippie gumshoe lamenting the end of the sixties who, over the course of the movie, takes on three separate cases that eventually intertwine in an overly complex manner. I'm not going to even try to explain it all. Let's just say it's a series of scenes where Doc talks to a colorful collection of characters that epitomize the era -some friendly, others not so much- where every clue leads to yet another person, until we end up pretty much right where we started.

I'm not that familiar with Pynchon's work, but it does seem like a good fit for Anderson. I'm sure there are fans of the novel that might enjoy the movie more than I did. It might help if you don't have to spend too much time trying to figure out who the hell everyone is and exactly how they relate to Doc. The director certainly doesn't spoon feed any info to the viewer. The plot is Raymond Chandler by way of Hunter S. Thompson. It's like a weird mix of Howard Hawk's The Big Sleep and Robert Altman's The Long Goodbye. Only not as good as either of those films.

I've always admired Anderson's eye. He sets up shots beautifully, frames scenes with meticulous care, and moves his camera around gracefully. He fills the screen with historically accurate minutia (check out Doc's turquoise rotary telephone) without overdoing it in the costume or set department. It doesn't scream 1970s in the same way that American Hustle does, for example. But you know a movie isn't very compelling when you are more interested in the shot choices and décor than in the story being told. Anderson has a decent track record. He's made some really good movies like Boogie Nights, Magnolia, Punch-Drunk Love and the Best Picture Oscar winner There Will Be Blood. But lately he's been off his game. The Master was disappointing and Inherent Vice is even more so.

Phoenix does what he can in the role of Doc. But he's written as too subdued and introverted to be any fun to be around. Especially since this character completely dominates the movie. Josh Brolin fares better as the orally fixated LAPD officer nicknamed Bigfoot. He at least brings some personality to the role. In many scenes he has either a Popsicle or a banana in his mouth and (without realizing how it looks) sucks, licks and nibbles at them like a hooker giving a blow job. The joke, I suppose, being that this homophobic, racist asshole who proudly states that he spends his days violating people's civil rights, is subconsciously gay. Though just why that's funny is beyond me. On the contrary, I find it borderline insulting to gay people.

The pace is too plodding for a comedy and, as demonstrated above, the humor is quite juvenile. The cast of colorful characters breeze in and out of Doc's life in a jarring way. If the intention was to make the viewer feel like they've gotten a contact high, it succeeds. The situations the eternally stoned “detective” encounters aren't explained. You might want to take notes like Doc himself does when interviewing people for his “cases”. Or, better yet, you can just smoke a little grass yourself, sit back and let the movie wash over you. You might enjoy it more that way, although to be honest, I can't say it increased my enjoyment by much. 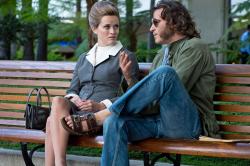 Patrick hit the nail on the head when he referred to the pace as "plodding". It is far too slow and with a running time of 148 minutes that is about an hour too long. In comedy, which is what this movie seems to be trying to be, timing is everything and comic timing is nowhere to be found here. What's interesting is that if you watch the trailer you'll see plenty of timing. Whoever edited that should have edited the movie. It's filled with quick, cleverly intertwined cuts that, while still incoherent, present the image of a movie with energy, something the finished product completely lacks.

Clearly, plot coherence wasn't something Anderson was interested in presenting with his script. While the story starts like a classic private eye film by having a femme fatale come to the detective with a mystery, that mystery then gets lost in the mess that follows. Apparently we're just supposed to marvel at each subsequent scene without worrying if they have any connection to the one that came before or after it. A funnier script and some characters the audience could care about might have made such a film work, but both of those elements are lacking. As Patrick said, all we're really left with is a series of scenes where Doc interviews a range of colorful characters, many of them played by famous actors and one played by the former porn star known as Belladonna.

I agree that the production values are excellent. The look of the film is the best thing going for it. It evokes the 1970s without caricaturing it as is the wont of most filmmakers when they set a movie in the "Me" decade. And again echoing Patrick, Anderson is a fine technical director, setting up shots in interesting and dramatic ways. However, admiring a director's technical skills isn't nearly enough to sustain such a long movie.

Phoenix certainly looks the part, but he lacks the likability needed for his character. A young Bill Murray might have been able to bring this character to life. Doc is a such dull, low-key guy that he needed more inherent charisma to draw us into his world. The rest of the cast is fine, but the slow pace and editing works against them. You can't fault them for lack of trying.

If you've ever had a conversation with someone who was high while you were sober, then you will already know what the experience of watching this movie is like. The high person thinks they're telling a funny story, while the sober one can tell that they're just mumbling and rambling. Somewhere in this mess there might be a story worth telling, but only if Anderson sobered up before writing it. 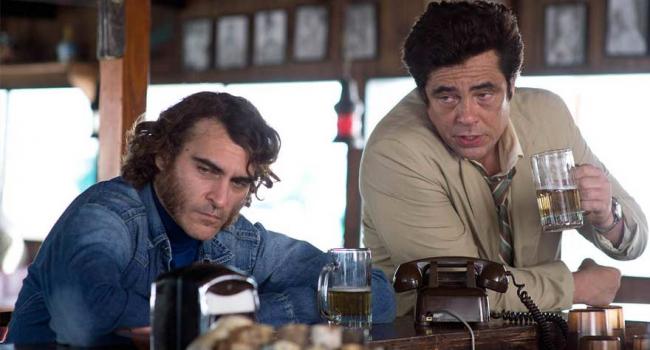 Two and a half hours is way too long for a detective comedy film that lacks a charming and likable lead character. River Phoenix's Doc is worth some laughs, such as when all the policemen constantly bully and abuse him. However, Doc is not a character a sober person can truly connect with. There should have been a more traditional detective on the case with Doc being his pot smoking assistant. It does not make too much sense that such a laid back stoner would want to do, or even be good at, detective work.

I cared nothing for the people in this film or their problems. I cared not if the mystery of the missing persons was ever solved. However, the movie contains plenty of decent humor. Some of it physical, I liked how Phoenix gets knocked out at the whore house or gets pushed around by cops. Note how all the agents interviewing Doc pick their noses during the interrogation. Like Patrick, I liked Brolin's sexual gestures. The party where the police are barbecuing in their uniforms and the girl shoves her ass in Doc's face when setting down his drink is smile inducing. When Doc talks to the dentist, he snorts some of his cocaine, just to be sociable.

The dialogue is even funnier, such as when the drug counselor says she tries to talk young people into sensible drug use (not to abstain entirely mind you) or the receptionist at the whore house talks up the pussy buffet. After placing their orders at a restaurant, The waitress asks Doc and Sauncho, "And to drink, gentleman? You're going to want to get good and fucked up before this meal!" One of the most memorable lines is when Doc's aunt tells him about a suspect, "He's technically Jewish but wants to be a Nazi" I laughed hardest when Christian's wife snatches the telephone from him and bitches to Doc about the health insurance bills.

Clearly this was written by someone who has done plenty of illegal drugs in their time. This is exemplified by all of the good times people are shown having when stoned. One of the funniest is when some police pull Doc and three other people over after they recently used some drugs. They are all paranoid and obviously under some influence but the police are ignorant to it. When the officer approaches the car, the girl driving asks him, "Are you the great beast?" After the officer points out that she is driving without her lights on, she responds, "I can see in the dark." The officer explains that he pulled them over because, "Any gathering of three or more civilians is now considered a possible cult..." Of course they do not get into trouble.

Even though the scenes change constantly and characters come and go at a rapid pace, very little of interest, plot wise, truly happens. As a detective story, Inherent Vice does not entirely work but as a comedy, it contains plenty of laughs. With such a drug addled collection of characters I kept thinking of the old saying that "the inmates have taken over the asylum." Where was Raymond Chandler when you needed him?