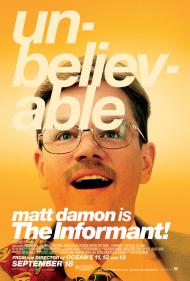 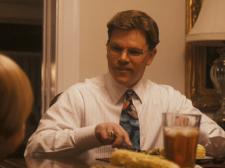 Although Matt Damon will likely be remembered for playing action hero spy, Jason Bourne, he does have some comic flair. Soderbergh drew a decent comic performances from Damon in the Ocean movies, and does it again here in The Informant.

Damon plays real life corporate snitch, and habitual liar, Mark Whitacre. As a Vice President of a agriculture conglomerate, ADM, he makes a good salary, flying all over the world to make deals and fix prices. His lies get him into trouble as he has to cover up one by creating another. Before he knows it, he is helping the FBI expose an international price fixing scam in order to cover his own butt.

Damon portrays Whitacre as a self centered nut case. He loves all of the attention he gets from the FBI. He is betraying his company but still thinks he will have a job after the fact. Every time he opens his mouth you never know if what he is about to say is a truth or a lie. As portrayed by Damon, Whitacre does not seem to know ahead of time either.

Damon packed on a few pounds for this role. He wears a wig and glasses. All of which helps him partially disappear into the role. To Damon's credit, he does a decent job. He wears an unconvincing smile the entire film that seems to be hiding something.

That makes for a good comic performance, but not a realistic one. Whitacre did plenty of things that required lots of planning and foresight. Thus adding to the mystique of whether he is crazy or devious, or both. One minute he seems absolutely slow on the uptake, and then we find out that he has another agenda all together.

Damon has a running narration of Whitacre's thoughts. Sometimes these voice overs help develop the plot, while other times they are just humorous ramblings. This serves to further confuse the audience on how to exactly take Whitacre. Is he stupid or crazy? Do we pity him, or blame him? You may likely do both.

Damon's portrayal of Whitacre as a delusional, compulsive liar is the centerpiece of this so-so film. The price-fixing scam by the company was wrong, but not very compelling in terms of story-telling. It's Damon spiraling out of control deeper and deeper into his own lies that is the real entertainment.

Clearly Whitacre (as shown here anyway) was stupid, a little crazy and also very smart (even perhaps too smart for his own good). At the same time though, he's also a very likable family man and that's what makes him so dangerous. He's just a smiling, friendly good guy whom you would never expect to be stealing from you hand-over-fist. He seems to be doing the right thing so why would you expect him to be doing so much wrong?

I disagree Eric that Whitacre's character is unrealistic at all. I think it's just that you don't know him as much as you think you do when he's first introduced. He seems like such a simple, nice guy that he's easy to figure out, but he has more layers than that. His narration at the beginning of the film just seem funny, but by the end it makes him seem crazy.

Apart from Damon though there's not much else very appealing about the film. Whitacre's bosses aren't given much personality and the effects of their price-fixing aren't spelled out in such a way that you're strongly rooting for their downfall. At the same time, once Whitacre's indiscretions come out you're not really rooting for him to succeed either.

As a character study and a chance for Damon to show off his comedic acting The Informant succeeds, but as an entire film it's lacking.

Damon really shines as Mark Whitacre. He is a complex and interesting character with a compelling story arc. The whole point of the movie is watching him become entangled in his own web of lies. I wouldn’t call him crazy; he’s just one of those incredibly stubborn people that never accept the fact that their actions were bad and done for purely selfish reasons even when irrefutable evidence is staring them in the face.

From the opening onscreen titles Steven Soderbergh sets the mood as humorous. As a satire of actual events there are moments of dramatic tension but this is essentially a comedy; a comedy about greed, corruption and mendacity.

I find it a bit unnerving that movies set in the 1990’s are beginning to look like period pieces. Computers, phones and hair styles have changed a hell of a lot in 15 years.

The supporting cast is good but I completely agree with Scott that none of the other characters are fully fleshed out human beings. This is a star vehicle for Damon and to his credit he carries it off beautifully.