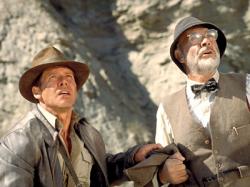 Each of the original three Indiana Jones movies varies widely in style. Raiders of the Lost Ark is darker, more adult, and the best overall movie. Temple of Doom is a kid's movie, with no character development at all. And the finale, The Last Crusade, is much more appealing to adults than Temple of Doom, but it remains light-hearted, steering well clear of the darker tone of the first movie.

I'm as happy as the next guy who grew up in the 1980s worshipping Harrison Ford that they're making a new Indiana Jones movie, but after a recent viewing of The Last Crusade, I have to say that it does a great job of finishing up the trilogy and really is a tough act to follow. It shows us Indy's origin and even ends with him riding off into the sunset after completing the ultimate quest of finding the Holy Grail. I mean how do you top that?

Of course the greatest thing about this movie is the interaction between Sean Connery and Harrison Ford, as father and son. This has to rank right up there as one of the greatest bits of casting of all time. Connery playing against type as a book-wormy professor is solid-gold when played against Ford's rough and ready, but constantly in over-his-head Indiana. From their first scene together, when Indiana swings in through the window, only to be hit on the head by his father ("I thought you were one of them!" "Dad, they come in through the door!"), the comical back-and-forth never stops ("Well, I'm as human as the next man." "Dad, I was the next man."). And it's not just comedy that they express. Underneath it all, but never in a heavy-handed way, their scenes together carry real emotion. Indiana complains that his father taught him that relics were more important to him than his own son; to the degree that he left home as soon as possible. "You left just when you were getting interesting," is his dad's reply. It's because of this underlying emotion that the finale works so well.

My only complaint about this movie, and this is the first time I really felt this way, and maybe it was just because I watched all three of the movies in quick succession, is that at times it feel too light-hearted, especially when compared with the first movie. It is really only in the first movie that you ever feel like Indiana Jones or any of his friends are really in danger. Remember the scene in Raiders when Indiana thinks that Marion is dead? He sits in a bar, drinking and then has a confrontation with Belloq. That scene is much darker and real than any scene in the other two movies. I hope that the upcoming Indiana Jones and the Kingdom of the Crystal Skull manages to have some of that darkness, but the previews make it appear to be much closer in tone with The Last Crusade.

When Spielberg takes off his serious hat and channels his inner-child, there's no one better at making sheer entertainment. And that's what the Last Crusade is; pure entertainment. It might not be as good a movie as Raiders of the Lost Ark, but for sheer fun, it can't be topped. 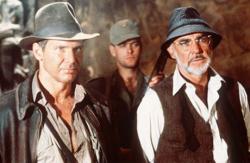 The Last Crusade is a fun watch. I just rented it and showed it to my twelve and fourteen year old. They both loved the movie and are now excited to see the fourth installment. They were not bothered, at all, by the often silly jokes, and the scene where Henry gets shot was quite concerning for them.

I do, though, understand where Scott is coming from. The scene where Indiana is breaking through the library floor, while the Librarian simultaneously stamps books, falls flat as a sight gag. It never should have made the final cut of the film. The worst moment though is during the middle of the exciting tank rescue, when Brody pauses to tell Henry that, "The pen is mightier than the sword." In reference to something Henry just did. The moment is supposed to be tense, but the line destroys the mood. I do, however, like when Elliott gets lost in North Africa and asks, "Does anyone speak English, or ancient Greek?"

What I got out of re-watching this film is just how pro Christianity it is. Indiana goes through an entire adventure that's final goal is ultimately the proof that Jesus was the divine son of God. It does not quote the bible or get at all preachy, but it does, within the realms of this movie, confirm the existence of God. When was the last time you saw a movie at the theater, that was not specifically a religious movie, do that?

All I ask of the movies that I watch is that they provide some good escapism. The Last Crusade provides as much escapism as any film you will ever see. This is mostly due to Indiana Jones, who is one of the greatest movie heros of all time. Harrison Ford seems to be having the time of his life playing him. Note the three different ways he says, "Ah, Venice." He is responsible for the movies single funniest scene, "I gone-n-caught a sniffle." Sure, Indiana Jones is all about adventure, but he is also all about charm. His approach to the odds he faces is what makes him so unique and likable. The odds are always against him, but through determination and even more dumb luck, he always triumphs over evil. 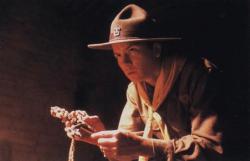 River Phoenix as a young Indiana Jones in The Last Crusade.

Last Crusade is a great finale to the original trilogy. I loved it back in 1989 and I enjoyed it just as much this time. I especially liked the opening sequence with River Phoenix as a young Indiana Jones Boy Scout circa 1912. We learn where his fear of snakes originated, how he first took up the whip and even how he got that small scar on his chin. It is a clever and informative look at Indiana’s early life (later we also learn his real name: Henry Jones Jr. (Indiana being his favorite dog’s name)).

The casting of Sean Connery is brilliant as Scott mentioned. I mean who could resist James Bond as Indiana Jones’ father? Although Connery was 58 to Ford’s 46 at the time of filming he successfully plays older, while Harrison always looked younger than his actual years. Their chemistry really makes the movie. They quibble nonstop while evoking an underlying emotional father/son bond.

Like the Bond movies, the Indiana Jones franchise successfully blends humor with action. I chuckled when Indiana suddenly finds himself face to face with Hitler. He’s clearly unsure as to what his next move should be until Hitler takes Jones’ father’s diary from him and autographs it, before casually handing it back to him.

There is a brief tribute to Raiders of the Lost Ark when Indiana and Elsa come across a painting in the church/library. The theme music from the first movie plays briefly while Jones tells Elsa he is “pretty sure” it is a painting of the lost Ark of the Covenant.

Connery’s best moment comes on the beach when he opens his umbrella and scares dozens of seagulls into taking flight directly in the path of a German plane that is about to attack. After the plane suffers a fiery crash, he calmly states, “I suddenly remembered my Charlemagne. Let my armies be the rocks and the trees and the birds in the sky...” While Indiana looks on in awe.

The Last Crusade holds the distinction of featuring the first all-digital composite. Technically this means that instead of a CGI image being added to the final print using optical printers (as in previous movies such as Willow), the scene where Donovan ages rapidly was scanned, digitally manipulated and output back to film using ILM scanned images of different filmed make-up transformations (I don’t understand it either). This death scene reportedly took a week to film.

When Steven Spielberg and George Lucas (the two greatest imaginations of their cinematic generation) joined forces to create Indiana Jones, they produced one of the most iconic action heroes in movie history. 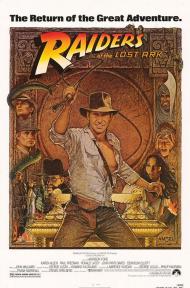 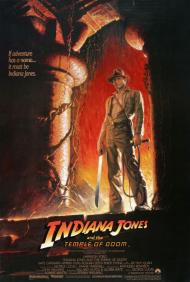 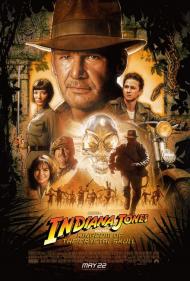