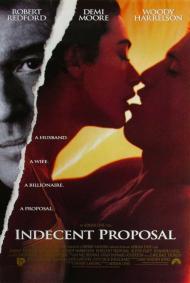 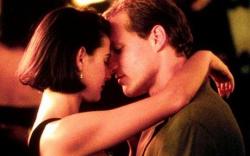 Indecent Proposal was the water cooler conversation movie of 1993. Movie goers all asked themselves the same question. Would they whore themselves out, or a loved one for one million dollars?

Diana and David are a young couple that want to buy some property. They have their hopes and dreams wrapped up in it. One day they decide to go to Las Vegas to see if they can gamble up enough money to make the purchase. Things do not go as planned and they end up without enough money. While window shopping for a dress, Diana meets a flirtatious billionaire, John. "The dress is for sale. I'm not." She tells him not knowing how wrong she really is.

Later, John invites the couple to a party in his penthouse. The invitation includes the expensive dress she was admiring. After most of the guest leave, John, Diana and David have a round of billiards where John makes his indecent proposal. The conversation starts with what money can and cannot buy. Diana says that you can't buy people emotionally, and John says that it is naive to think that you cannot buy love. To prove his point he offers the couple a million dollars if Diana will spend the night with him. After some private conversation where they justify to themselves that doing it will mean nothing, they agree.

At this point the movie falls apart. Almost immediately the dishonorable couple regret the decision. David races to stop Diana but she has already flown away in John's helicopter. Upon her return they start arguing. They soon break up and Diana does the most ridiculous thing and hooks back up with John.

The movie is supposed to be romantic and we the audience are supposed to root for them. However, I never liked this couple. First of all, this man pimps out his wife and she willingly prostitutes herself for money. Secondly they have the stupidest fights afterwards. There are several moments when they could have reconciled shortly after the affair but they act retarded. The writers obviously had to break up the couple so as to fit the plot's needs. So they had the couple act completely unrealistic. If they had just apologized to each other and forgave each other they could have moved on right away, but instead the writers just had them yell and walk away so as to not have real conversations. Diana simply refuses to talk.

The movie ends with the simplest of morals, love conquers all, and material items are not as important as we sometimes think. John bought her body but not her love. If that was not cliche enough, Moore has this line, "If you ever want something badly, let it go. If it comes back to you, then it's yours forever. If it doesn't, then it was never yours to begin with."

Indecent Proposal features my favorite 80's pop singer, Sheena Easton in a blink and you miss her cameo.  She sings "The Nearness of You" at the party Redford invites Moore and Harrelson to.  This was not Easton's first project with Moore.  She sang a couple of songs on the soundtrack for Moore's film About Last Night (1986).  Moore even appeared with Easton in her music video for "So Far So Good."

Indecent Proposal is good for the one and only question it asks. However, it does not know how to go from there. The cast is great. Redford is as smooth as aged wine. Moore is at her hottest, fake boobs and all. Those babies don't hang, they point. Harrelson is the only one in a thankless role. He spends far too much time just acting jealous.