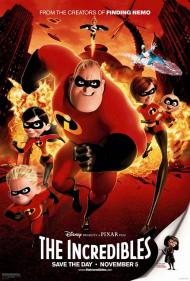 The Incredibles is an action packed family film that is, surprisingly, about an actual traditional family. In this alternate universe, superheroes fight and defeat villains on a regular basis. Until one day, a bunch of unbeatable bad guys show up and put an end to all of the good guys. The bad guys are lawyers who sue all of the heroes into retirement.

Fifteen years later, the once invincible Mr. Incredible is now Bob, working at an insurance company. He is married to Helen, who used to be Elastigirl. They have a teenage daughter, Violet, who can turn invisible and create force fields. They have a fourth grade son, Dash, who can run really fast. They also have an infant boy.

The family is slightly dysfunctional as they all are unable to use their super powers. Dash wants to play sports, but is not allowed because his abilities would obviously be noticed. However, Bob sneaks out once a week and with his former superhero buddy, Frozone, fight crime when Helen thinks they are bowling.

After losing his job from throwing his boss through several walls, Bob takes a secret assignment as Mr. Incredible. However, things are not as they first appear, and before you know it, Elastigirl, Violet and Dash join their father in battling a murderous super villain.

The movie is loaded with action. The scene where Dash is chased through the jungle is reminiscent of the chase scene in Return of The Jedi. It also has a few surprising scenes of tension. At one point, Mr. Incredible actually believes his family has been killed.

Each of the family members super powers are very symbolic. Helen's power is the ability to stretch. She is a mother and as any mother can tell you, they often feel pulled in several directions at once. The aptly named Violet is shy, thus turning invisible and creating walls around herself are just extensions of her personality. Dash is a 9 year old with boundless energy and little patience. His powers speak for themselves.

The Incredibles has a wonderful message about embracing what makes you different and unique. Even with special abilities, this family still has normal problems, but when they work together, nothing can stop them. 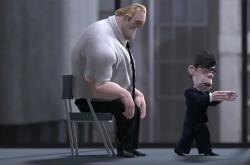 This movie works because of its humor and fast pacing. As Eric mentioned it is action packed from start to finish. It is also quite funny. Visually, especially the scenes on the island, it is very impressive as well. Computerized animation continues to evolve although it still has a long way to go to evoke true human facial expressions and emotions.

Because of this The Incredibles works best when it is being funny. The character of Edna "Dahling" (a fashion designer for superheroes) had me cracking up in the scene where she shows Helen all the new costumes she has made for her family. The humor works on both an adult's and child's level.

The serious moments don't ring as true. Traditional animation still conveys human emotion better than CGI's do. And for a family movie it's on the violent side. The body count of the bad guys that get killed is pretty high and there is much mayhem and destruction during the movie's climax.

Also the characters are all tongue-in-cheek stereotypes. The father is in a dead end job and longs for his glory days, there is the harried, worry-wort mother, the introverted teenage daughter and the hyperactive son. There is even the token black character in Frozone and the mysterious femme fatale, Mirage. All of these stock characters are presented with a knowing wink and good-natured chuckle by the filmmakers.

Whether or not The Incredibles becomes a classic movie only time will tell. Without a doubt, however, it represents something fresh and new for 2004. 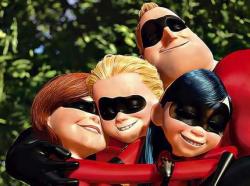 The only problem with The Incredibles is in how it is being marketed. Because of the amusing trailers, I assumed that it was going to be a full on comedy. After the first few minutes I was thinking, this isn't really very funny. Finally, it dawned on me that I had been duped and that this was actually a thriller in the guise of a children's cartoon.

Eric mentioned one scene that was reminiscent of Return of the Jedi, but much of the movie is very like a classic James Bond film. When Mr. Incredible is sneaking into Syndrome's island fortress (itself a direct lift from nearly every Bond), even the soundtrack seems to be taken directly from Goldfinger. And the room wherein Mr. Incredible has dinner with Mirage is very like Dr. No's dining room, only with lava instead of water.

I agree with Patrick that Edna gets the best jokes in the movie. Her explanation of why she won't design a super-suit with a cape is a great send up of the superhero genre. As for his complaint that the body count was high, I say bravo! The one thing that I can't stand is when in a cartoon, a vehicle of some kind explodes and the occupant is shown moments later, crawling out of it, smoldering but still intact. Thankfully, this movie avoids that cliché. I saw the original Star Wars when I was eight, and I can't say that seeing Storm Troopers getting killed ever did me any harm.

This is a great movie with a message as Eric said, but thankfully, it knows not to beat you over the head with it. If you want to read a meaning into it you can, but if you just want to sit back and enjoy it, you can do that too.

Shrek 2 might have been funnier, but The Incredibles is easily the best-animated movie of the year.