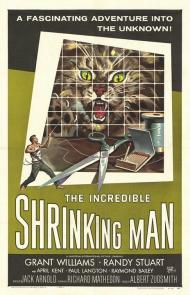 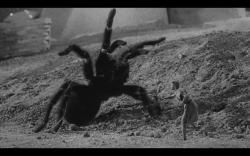 The Incredible Shrinking Man is one of the most iconic B&W sci/fi movies of the 1950s. It was directed by Jack Arnold and based on the Richard Matheson novel. Matheson adapted the screenplay himself. It tells the straightforward tale of a businessman named Scott Carey who, while on a boating vacation, is contaminated by a cloud of radioactive dust particles that combine with some insecticide he accidentally ingested. Soon Carey begins to shrink in size...

The blandly handsome Grant Williams plays Carey. He was by no means a great actor, but he is perfect in this role, which relies more on athletic prowess than classical emoting. His wife Louise is played by Randy Stuart, who's likewise no great thespian. She tries to be as understanding as possible but doesn't bother keeping close tabs on the family cat even though her husband is about six inches tall and living in a dollhouse. Oops.

The Incredible Shrinking Man is campy and it's easy to make fun of the more dated aspects of the movie. I laughed at the difficulty Louise faces when she inquires about getting their phone number unlisted. Philosophically the story is making a statement about what it means to be a man living in what was then contemporary suburban America. Carey begins to act more childlike as his stature diminishes. He pouts and refuses to leave the house. At one point, symbolically, his wedding ring falls off his finger. Although they couldn't be too graphic about sex in those days, this is meant to raise the idea of just how impossible any physical contact between this husband and wife has become.

The second half of the movie is more action oriented as Carey finds himself a prisoner in his own basement with a black widow spider for an enemy. The oversized props in this sequence -a pair of scissors, a pencil, a mousetrap, a matchbox- are some of the most famous in movie history. Here Scott Carey finds himself reduced to the primeval struggle for survival.

The ending is one of the most famous in sci/fi history. Carey finds inner peace as he continues to shrink to an infinitesimal size. He escapes his basement prison by climbing through a window screen. He looks up at the night sky and delivers an eloquent soliloquy on his existence and place in the universe. “...And I felt my body dwindling, melting, becoming nothing. My fears melted away. And in their place came acceptance. All this vast majesty of creation, it had to mean something. And then I meant something, too. Yes, smaller than the smallest, I meant something, too. To God, there is no zero. I still exist!” 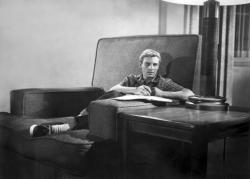 I didn't find this movie to be campy so much as overly melodramatic. The scene with the wedding ring slipping off of Scott's hand, for example, which takes place immediately after his wife says they'll be married so long as that ring stays on his finger, is accompanied by a heavy chord of music and meaningful looks worthy of a soap opera. Likewise, Scott's narration is littered with oh-so-dramatic pronouncements, such as, "The cellar stretched before me like some vast primeval plain, empty of life, littered with the relics of a vanished race. No desert island castaway ever faced so bleak a prospect." The only humor to be found is the unintentional kind.

Although some of the special effects are quite bad, for the most part the filmmakers do a brilliant job of convincing the audience that Scott is actually shrinking. Using oversized props and forced perspective there are several scenes where it looks quite realistic. Scott's adventures in the cellar, including his battle with the spider, are very well done. Only in a few of the wide shots do the limitations of the time period become evident, as when Scott walks down the street or when he calls down the stairs and is actually partially transparent in the frame. One of the best effects is the tarantula itself, which appears quite gruesome in extreme close-up.

There are a few hints in the story about Scott's diminishing manhood, but only a few. Sex is, of course, never brought up, and it's up to the audience to infer that part of Scott's reaction to his situation are his feelings of the loss of his dominant position in the household. For the most part the script stays away from the psychological and symbolic aspects of the story and remains content to be played as an adventure story.

Williams is fine in the lead role. He meets the physical demands, which is really most of what is required of him apart from behaving petulantly. Although he would appear in other movies and on television, this was his biggest part and the one he will always be remembered for. I was surprised to learn that he began his career as an opera singer and that he died relatively young, in only his early 50s.

After the success of this movie, writer Richard Matheson (most famous for writing I am Legend) wrote a sequel. It was to have involved Scott's wife shrinking from a delayed effect of the same radiation and eventually she would have been reunited with him. Although it was never filmed, the story has been revisited. A 1981 comedy remake starred Lily Tomlin as The Incredible Shrinking Woman. Another remake has been in the works for years with different directors and stars linked to the project, but so far nothing has come of it. My fear is that any remake would spend more time bringing the special effects up to date, when what this movie needs is for the more adult psychological aspects to be brought out more.

This is another of those movies I remember enjoying as a child. I have vivid memories staying up to watch it as a Late Movie on our old black and white television. At the time, I thrilled to the adventures of Scott Carey as he struggled to survive. It still has the ability to entertain, but the melodrama overshadows too much of the story, particularly in the first-half. Even a small amount of humor to lighten the mood would have gone a long way to making this a true classic. Instead, it just misses.