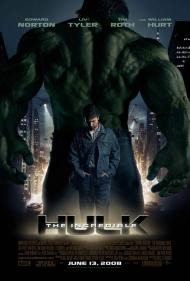 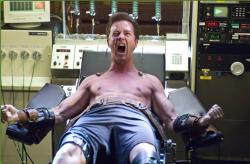 Edward Norton in The Incredible Hulk.

The plot is real simple. General Ross is after Banner because he wants to use him as a weapon. "As far as I'm concerned that man's whole body is property of the US Army."" Banner just wants to find a cure. "I don't wanna control it. I wanna get rid of it."

After the Army chases Banner back to the U.S.A., he hooks up with his old flame Betty, and they become fugitives. Meanwhile, Blonsky, a gung-ho soldier, agrees to be given drugs that make him have super powers. He tangles with the Hulk and gets his ass kicked. He gets more treatment and is soon, bigger and meaner than the big green one, and starts wreaking havoc.

Banner then decides that being the Hulk may have some advantages. "Maybe if I can control it, I can use it." The two goliaths demolish great chunks of Manhattan as they battle at the film's climax. It looks like an animated, exaggerated battle between Batista and the Big Show on WWE Smackdown.

This version is better than the 2003 Hulk. It recaps the Hulks origins while the opening credits run. It still however, has the same weakness. Tony Stark, who makes a brief appearance, has charm in spade. Peter Parker is a likable geek. Clark Kent is an outsider looking for his place. Bruce Wayne has a split personality. Bruce Banner is just running while pining for Betty. He really has no discernable personality to relate to. Until that is resolved, The Hulk series will never reach the heights of these other films. 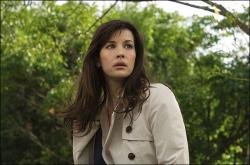 Liv Tyler in The Incredible Hulk.

Yeah, this one is better than the first one, but then the first one set the bar so low, this one almost couldn't help but be. The biggest problem remaining with this one is that the movie is still a downer. Who wants to see a depressing super-hero movie?

The finale is very much like a WWE Smackdown as Eric said, which wasn't very helpful to me since I don't find wrestling very entertaining either. Not that this movie doesn't have its moments, but frankly I found the scenes without the Hulk to be more entertaining than the ones with him. Although the scene at the college where the army tries to take the Hulk down is probably the best of all of the action scenes.

The other problem with this movie is that it is just too long. Like Eric said, the plot is simple. It's just one long chase with a big fight at the end of it and yet it runs nearly 2-hours. In other words, about half an hour too long. As Bruce puts in the movie, the Hulk is like a bullet, the best he can hope to do is aim it. Well that pretty much sums up this movie and why the Hulk character is pretty boring. He has no motivation or personality, he's just a lumbering giant who smashes.

If they'd really wanted to reboot this franchise, they should have gone darker and made the Hulk more of a villain; more of a Jekyll and Hyde type of character. If the Hulk did real evil which Bruce Banner had to live with when he came back to himself and maybe Bruce became addicted to the strength of the Hulk and actually wanted to be the Hulk, then maybe I would have been more interested.

So what you have with this movie is a B-grade super-hero movie that does manage to improve on the franchise, but manages to entertain only slightly, on a visceral level. The talents of Ed Norton and Tim Roth are wasted here.

The Hulk towers over Tim Roth.

I absolutely hated 2003’s The Hulk, easily the worst superhero movie of the last 30 years and certainly Ang Lee’s worst movie. Incredible Hulk is a solid 3 star popcorn movie. As Eric mentioned it can be taken as a sequel to The Hulk but at the same time it stands on its own and is a very different and vastly superior movie.

I disagree with Scott about Edward Norton’s talents being wasted here. On the contrary he is the perfect Bruce Banner. One of the biggest mistakes The Hulk made was casting Eric Bana in the lead. Besides his completely wooden acting he is also the wrong type for the role. Bruce Banner is not a handsome leading man. He needs to be a bit of a dweeb. Norton fit’s the bill perfectly.

I also found the CGI look of the hulk to be much improved this time around. Here he at least looks real. The action scenes are well-done and I agree that the college campus fight is the most entertaining sequence in the movie. I wasn’t expecting to like Incredible Hulk, but I did.